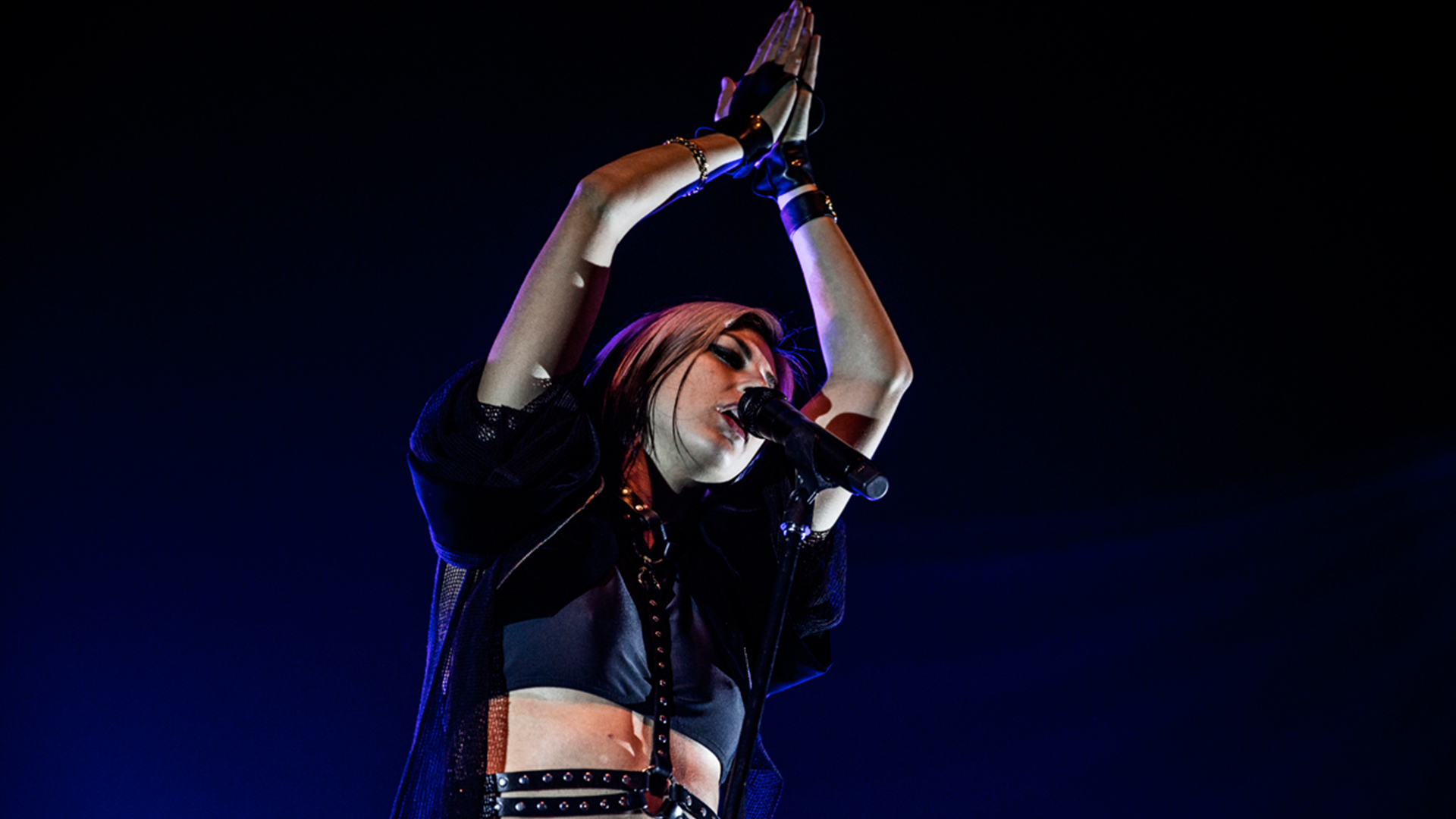 Take it from us — you don’t want to miss a Phantogram show. Consisting of shared vocals, with Josh Carter on guitar and Sarah Barthel on keyboard, the “You Don’t Get Me High Anymore” masterminds put on a performance that is truly electric. Complete with strong vocals and psychedelic visuals, the Three tour is a must-see. Manhattan’s Hammerstein Ballroom was aglow as the duo from Greenwich, New York and opener The Range played to a sold out hometown crowd.

On one of New York’s coldest nights thus far, people first gathered around to hear the deep electronic beats of James Hinton. Taking his place behind a computer, surrounded by flags that spelled out “Range”, Hinton played songs including “Copper Wire” and “Superimpose” from his latest release Potential, an album compiled of vocals sampled from YouTube. Hinton concluded his electrifying set with “Florida”, his personal favorite from the release.

A project which began in a basement in 2011 (a place not unfamiliar to epic shows and hole-ing up to create magic), The Range fuses elements of electronic, experimental, and hip-hop. Live, there's no way you can't be impressed by the way Hinton uses his skills from his time as a physics major at Brown University. Combining vocal samples from all over the internet, you'll come across familiar sounds that you never would imagine could make sense together. This is the art of The Range.

As the lights dimmed and a sheet was draped in front of the stage, fans shuffled closer together to get their best views of Phantogram. The duo, who started out as Charlie Everywhere in 2007 became Phantogram in 2009 after signing with a new label, and in the years since, have worked out a perfect system for creating their signature airy, rhythmic sound.

Touring their most recent release, Phantogram opened their set with the moody “Funeral Pyre”, where Barthel powerfully sang from behind a white sheet that surrounded the back of the stage with her silhouette leaving fans begging for more. Using projected visuals to cast a mood over the crowd for the first four songs, the skrim dropped for the remainder of the show. Phantogram performed a hefty setlist peppered with songs both new and old including “Sam Old Blues”, “Black Out Days” and “When I’m Small”.

After a momentary pause, Barthel climbed a amplifier adorned in a flowing black cloak and performed “Destroyer”, while the flames were projected behind her, almost as to envelop her as she was singing.

The band wrapped up their set with an impressive triple threat of hit singles including “Cruel World”, “Fall In Love” and new lead single, “You Don’t Get Me High Anymore”.

Three was released on October 7, and showcases Phantogram's talent for successful experimentation, taking inspiration from AfroBeat and '60s R&B. The album is altogether impressive and entertaining, though it’s also infused with themes of tragedy and heartbreak; during the recording process, the duo suffered the tragic loss of Barthel’s sister, stopping recording and production immediately. This loss, along with the deaths of David Bowie and Prince, two of Phantogram’s biggest musical inspirations, began to pervade their music, giving it a beautiful, complicated depth. To honor Barthel's late sister Becky at their New York show, Phantogram graced the stage for a four-part encore, during which they performed an emotional dedication of “Barking Dog” as home video footage was projected behind them.

We were lucky enough to see Phantogram live at Terminal 5 in New York City, and we couldn’t have been more in awe.

Check out our photo gallery from the night to see what you missed, then Track both artists on Bandsintown so you don’t miss them when they come to a city near you.

Philly are you ready? See you tonight!