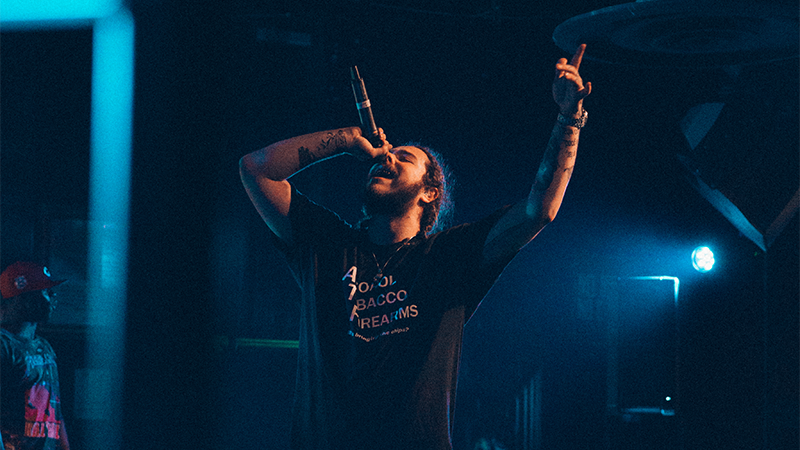 “I dreamed it all ever since I was young / They said I wouldn't be nothing / Now they always say congratulations”, croons 21-year-old Post Malone on the Quavo-assisted crowdpleaser featured on his upcoming debut album, Stoney. The banger, titled “Congratulations”, details his come-up in the rap game as well as his commitment to staying true to his roots, a hand that many are forced to play once they reach the level of superstardom that Malone has achieved. It’s no surprise either. With his signature braids (“White Iverson”-inspired, naturally), spacey yet hard-hitting productions, and a feature on Kanye's hit "Fade", Post Malone has become a force to be reckoned with in the industry.

Now, with his upcoming album ready to hit shelves on December 9, fans are going to see a lot more of where the NY-born rapper came from as well as in which direction he'll be taking his sound next.

We chatted with the hip-hop maestro about his relationship with Justin Bieber, his go-to tour bus snacks (chips, anyone?), and performing his new material live for fans. Check it out below, then make sure to track Post Malone on Bandsintown to make sure you don’t miss him when he's in a city near you. NYC, make sure to catch his show at Irving Plaza on December 14—get tickets here!

Tattoos, man. Tattoos are crazy—when a fan tattoos a lyric or my face or a cover or something like that it's just crazy because that sh*t's forever.

What song from Stoney has the crowd been most pumped to see live?

"Congratulations (feat. Quavo)" because it was unreleased at the time. Everyone who didn't have a phone out would pull it out to film when I asked them if they wanted to hear something off the album.

We love who you've collaborated with on the album. Have you seen any of these artists perform a memorable live set in the flesh?

Before the Hollywood Dreams tour, there was the Purpose tour and watching Justin Bieber do a two-hour show night after night was incredible, and his dancers too. The set changes, trampolines, that guy puts on a show. He's like my big bro, love Justin.

just wait on it.

What are you doing for a post-concert party the night of your album release/show?

We've got something special planned for LA right around album release...more info coming soon on that. Then we head to London December 12—sold out show! Then NYC 12/14 at Irving Plaza (Tickets are available now at postmalone.com).

Your European tour is kicking off soon. Is there one city overseas that you haven’t visited before that you’re amped to play and why?

Looking forward to Dublin. I have not performed there yet. We kick the European tour off there so it's going to be lit.

When you’re on the road, are there any albums that are constantly being played on the tour bus? What’s your all-time favorite and what’s your turn up go-to?

I love Kanye and Gucci, Toby Keith, Dwight Yoakum, Nirvana, Ozzy/Black Sabbath, Metallica. Rock and country and folk have grown on everyone on the bus since I play that sh*t all the time. Nirvana's Nevermind for all-time fav. "Red Solo Cup" by Toby Keith is a turn-up go-to because it's a song everyone can relate their drinking experiences to.

What are your go-to snacks/drinks that you make sure are on every rider?

Bud Light is a must. Gummies and chips with onion dip. The Dean's high quality stuff. Sometimes we get real fancy and pull out the rosé.

@budweiser loves me 💘 thank you