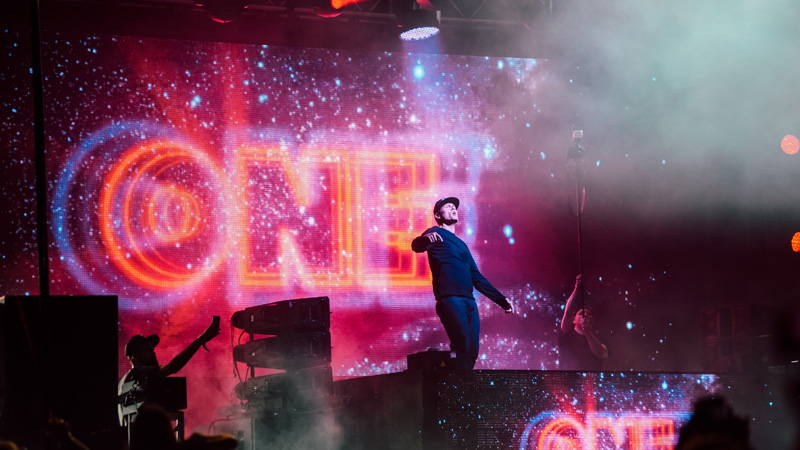 The final countdown has commenced for Day For Night Festival, one of Texas' most anticipated events of the year. In a week, musicians, digital artists, and fans alike will join forces on the grounds of a decommissioned US Post Office in Houston to celebrate the best that both industries have to offer. If it's anything like last year's inaugural event, the two-day spectacle is going to be a dazzling testament to what the future of festivals can look like.

And we're not the only ones amped beyond comprehension.

One of the fest's headliners (and pyrotechnics mastermind) Kaskade exclusively shared with us what he's looking forward to the most next weekend, saying, "The collection of performers scheduled to play Day for Night is so insane, I’m super stoked to be a part of it. It’s definitely incentive to bring my A-game to Houston, as this audience is bound to be wound up and ready to bang. Texas always gets loud - they’ve always been some of my most enthusiastic supporters. Can’t wait to see all my people making memories with me at Day for Night!"

While the "Disarm You" producer, Tycho, and ODESZA are obviously major draws this year, our favorite part about the weekend is its equal emphasis on the flourishing digital art community as it puts on the musicians involved. Featuring installations from visionaries such as Nonotak and Björk, the immersive experiences on the grounds rely on the festivalgoers to take part in, and fully interact with the pieces, bringing new meaning to the phrase, "be one with the art."

We chatted with Day For Night's Art Curator, Alex Czetwertynski, about his work as a designer, who he's most excited to see this year, and what he thinks about musician's VR usage. Check it out below, and if you've yet to get your tickets to the December 17 and 18 affair, make sure to scoop them up here.

You’ve worked with everyone from Beyoncé on her world tour to The Strokes on their large scale graphics—what was the most memorable project you’ve worked on so far? Why?

One of my most memorable projects was working on the celebration of the 150th's anniversary of Mexico's independence. We mapped the entire Zocalo square with 55 projectors and had a full 3d scan of the entire location. About 2 million people saw it.

Who would be your dream musician to collaborate with, as far as designing new media aspects for their tour?

Day For Night will be hosted at the historic Barbara Jordan Post Office this year—an even larger space than where last year’s festival was held. How does this change the large-scale installations that you’ll be able to feature this time around?

It gives us the ability to create a more seamless conjunction of installations, and also to have a more consistent dialog between the installations and the architecture.

DFN is unlike other festivals because of it’s just as much about digital art as it is about the music. How do you think concertgoers responded to the introduction of a new, major element into the music festival experience?

They responded in the absolute best way, which was to give us their undivided attention and enthusiasm. We saw people engaging with the artwork in ways that you never see in museums or galleries, a real interest, curiosity and desire to learn more.

How do the installations and the musical performances rely on one another at DFN?

We create a true "audio-visual" environment across the entire venue, where concerts are highly visual experiences and art installations are powerful sonic experiences. Then you have the artists that perform inside their installations in counterpart to musicians who create installations. It is truly about merging light and sound.

Founder and music lineup curator Omar Afra, said that “The focus across multiple genres is on acts that specialize in an inventive and highly visual approach to performing.” With that said, whose performance are you most excited for at DFN?

I'm excited about a lot of them, but in particular I would say Aphex Twin, Arca, John Carpenter, Thundercat, Mary Lattimore & Jeff Zeigler, Christine Renee. I'm also really looking forward to being surprised!

What was the decision making process like for choosing visual artists to include this year? Did you have certain people in mind?

Yes, the curatorial process follows some specific guide lines : artists need to be able to make large scale site specific work and they need to have a unique aesthetic and style. I also find it important to combine people with years of experience and a large body of work with younger emerging talent. We also want to cover the wide spectrum of "new media" art, may it be light based art, computational art, interactive, or generative.

People really responded to Nonotak last year - why do you think his work resonates with live music fans so well?

Nonotak represents the true organic combination of talent in installation and light art with powerful performances that are designed to both enhance and elevate their installations. They create a true dialog between sound, space, light and audience. I think this is what audiences crave, a change of formula from the now centuries old dynamic of passive audience and active performer.

I saw Björk’s Stonemilker VR project at MoMa PS1 last year, it’s insane. Do you think other artists will follow her lead and attempt to use VR to connect with their fans?

I don't think VR is for everyone. Björk uses VR brilliantly because it allows to enhance her already heightened emotional connection with her audience, submerging them even more in her rich audio-visual world. But artists that have different relationships to their audience will not necessarily crave that intimacy. As with all technologies, it is good when used in the right way by the right people.

Happy birthday Björk! We are proud to be hosting her installations and live Dj sets. #DayforNight