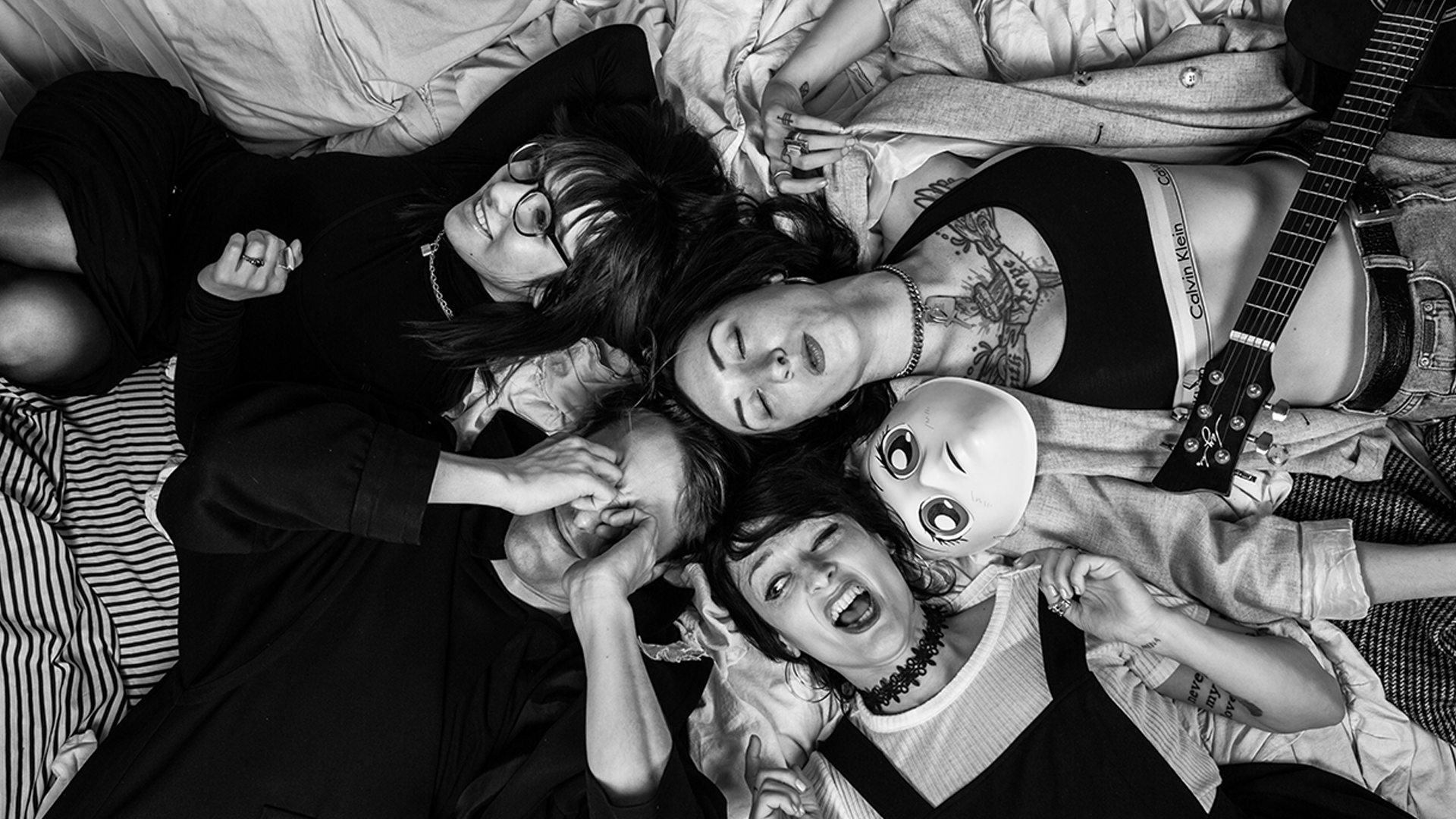 A staple in New Jersey post-hardcore bands, Thursday, is one of the groups whose shows you went to, and totally let loose. They're one of those bands whose older records still, when spun, bring back a sense of nostalgia, angst, and hope. They're one of those bands, who, even other bands see as an inspiration and whose concerts are a must-catch from the crowd, or even the side stage.

Touring with the "Understanding in a Car Crash" musicians through mid-April, is self-proclaimed "b*tch pop" California band Wax Idols. Consisting of Hether Fortune, Rachel Travers, Peter Lightning, and Marisa Prietto, the quartet is looking forward to the March 10 cassette reissue of their 2015 record American Tragic via their own label, Etruscan Gold—and based on frontwoman, Fortune's appreciation for Thursday, there is no better way for Wax Idols to celebrate.

The singer, songwriter, and former White Lung member first attended a Thursday concert at age 13, so if there's any expert on their live shows, it's her:

"...when I discovered Thursday, it felt like the perfect middle ground for me. Music rooted in punk and post-hardcore but intensely introspective, poetic and emotional. Thursday became my number 1 band obsession. I saw them every time they played within a 200 mile radius of my rural home in Michigan for many years."

"If I could go back in time and tell my 15-year-old self that she would eventually be on tour with her favorite band—wow. 15-year-old me would f****** die."

That's why we're beyond excited that the Wax Idols founding member has put together a list of reasons why you just have to see Thursday live. Check out her reasoning below, and trust us when we say she's completely right (and important).

In no particular order.

There is nothing like being in a huge room packed to the brim with people who love a band as much as you do. Thursday shows are wild; people go OFF, screaming along to every word and jumping all over the place. It's beautiful. Plus people will help you up if you get knocked down. It's a positive environment even in its aggression.

Truly one of the greatest performers I've ever seen, Geoff Rickly is always drenched in sweat from head to toe after a show. He gives everything he has every single time and can swing a microphone cable around like it's a god damn lasso. There are no off nights. I've seen Thursday dozens of times.

How many pictures of Geoff lying on the stage can I post? I dunno but heres one more from last night // #deadboltphotos #geoffrickly #thursday #music #starlandballroom #makeportraits #sony #sonyimages #alphacollective

There is something so desperately hopeful about Thursday's music, even in its bleakest & most painful sounding moments. Never a band to shy away from being "too political", you're bound to get an earful about the state of the world & there's nothing more empowering than hearing your world view echoed by people you admire. It's true that the tour is mostly a sausage fest, but Thursday as a band has always represented inclusivity, compassion & awareness. No matter who you are or what you look like, you will be welcome. Unless you're on some homophobic, racist, sexist, xenophobic ****. If you are, this show is not for you.

I haven't seen/shot @thursdayband in almost 10 years and I am beyond stoked that they are back on the road to play shows. (all my Thursday photos are somewhere in the thousands of photos in the stacks of hard drives in my room) so heres from the last time I saw Geoff. United Nations | Berkeley,CA #thursdayband #thursday #unitednations #geoffrickly

You may not get another chance to see this band live. It's possible that they will make another record, but the fact is, Thursday has been around for a long time and there's no telling whether or not this is a one-off thing. You snooze, you lose!

As the opener band on a monster bill, we've got a lot to prove & are looking forward to the challenge. We are very approachable people despite how we may appear on stage, so if you see us around the merch zone after our set, don't be shy. We're always happy to meet new people.

This morning @noisey premiered a video for "Deborah" ft. live footage from some recent shows in honor of the AMERICAN TRAGIC cassette reissue & our upcoming tour with @thursdayband | MUCH gratitude to Kim at Noisey, @omaracosta7 & his team for the contribution of their time & skills and to everyone who has been supporting us actively in a million ways for many years. We'll take our joy where we can & when we can. Link in the bio features the video, all upcoming tour dates including a few of our own headlining shows + more. 💋💋