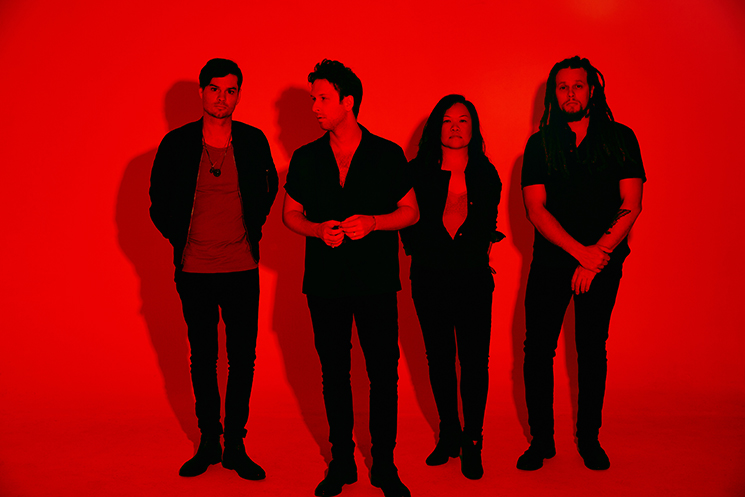 With the release of Elliot Root's first full-length album just around the corner, prepare for your emotions to be shaken and soul to be stirred. Conjure contains 13 soaring rock anthems—some haunting, others impassioned, but all brimming with a warm, emotional resonance. Reeling from a breakup? “Wicked Lies” can relate. Having doubts and fears? Here’s “10,000”.

The Nashville four-piece have never shied from wearing their heart on their sleeve, and already have two EPs, Thoughts From Yesterday and II (both released in 2015), that showcase their poignant strain of rock. Now, emboldened with new tracks, the band will be embarking on a US tour through October, bringing their energetic live shows to cities from New Orleans to Knoxville.

Read on for an interview with frontman Scott Krueger, who spoke to us about the making of Conjure, his love for sad boy music, and the onstage unicorn he’s been chasing. And keep tracking Elliot Root on Bandsintown to stay up-to-date with all their touring news.

Congrats on Conjure. What mindset was the band in when putting this album together?
We were coming off two EPs over the past couple of years and really, a lot of that time was spent developing the sound we wanted for the band. When we decided to make the full-length record, we tried not to go into it with too many preconceived notions or concrete plans, and just started writing songs. We wrote the first two singles right off the bat, and having set the tone with them, we were able to step back and fill in the space around it. We just let things naturally unfold and experimented as much as possible.

Your new songs like “10,000” and “Wicked Lies” are massive in terms of sound and scale. To what can we attribute this new boldness?
We always had ambitions of making a record that sounds a little bit bigger. We wanted to go to those places on the EPs, but I think when you’re trying to condense an idea, the vision gets narrowed because you have less time to tell a story. With the record, we were afforded the opportunity to really stretch out and try to have a bigger narrative. Naturally, that warranted us making things sound a little bit bigger, and it gave us the opportunity to try things that we would’ve been a little bit timid about doing in the past.

Conjure arrives two years after your first two EPs. How has the band grown creatively over that period of time?
I think we’ve become a bit more confident in the choices we make. We all sort of start out emulating our heroes and over time, you sort of find your own unique spin. When you’re a bit timid about things, or trying to stay focused on a smaller picture, I don’t think you take as many risks. Being able to trust your instincts and being able to let it happen naturally opens a lot more doors.

Which of the album’s songs are you most excited to take onstage on your upcoming tour?
I think the whole record, to be honest! It’s always so much fun playing new songs because there’s an evolution of things from the studio to a live setting. There’s a whole new set of circumstances and you have to figure out a way to update them live. They can take on a whole new life. So there’s still a lot of magic for us now with these songs. Everything feels fresh and it’s a different experience every time.

Do you remember the first Elliot Root show?
Yes I do! It’s laughable now, looking back at it. I got started a little later in music so the first Elliot Root shows were really sort of me learning how to be a musician, throwing things at the wall and trying to sound like other things that I liked. It was fun at that time but it’s funny looking back now, because you always feel like you have a full understanding of where you’re at though you never really know anything.

Playing live must have played a big part in shaping the band.
It 100% has played a really big part, because you start to see what moves people out on the road and what pieces of what you’ve done resonate with people. When you go back to the writing process, you remember which parts of the music you’ve created so far have been most impactful for people, and you start shaping yourself with what has worked best live.

Conjuring up vibes in New York City last night, thanks to all who came. We love you! See you in Baltimore tonight... . . . #ElliotRoot #newyorkcity #livemusic #CONJURE

What makes a great live show for you?
For me, personally, I’m always chasing after that place where I’m not thinking. It is an illusive headspace and almost never happens, because I always find myself thinking about various things when I’m playing onstage. It’s really rare to play a show where you’re really in it and you’re really just riding the wave for what it is. Those are my favorite shows because they’re really rare. It’s the unicorn I’m always chasing!

Do you remember a show where you caught that unicorn?
The time that really comes to memory was the first really big festival we played, SunFest in Florida. That was the first time we ever really played for a crowd that big, so the buildup to it was really intense because there was a lot of nervousness and stage fright. I remember going off muscle memory the first couple of songs before realizing how big of an experience it was to be playing to that big of a crowd. That took all the fear away, the autopilot kicked in, and I spent the rest of the set enjoying the fact that we were in that position.

The band’s Spotify playlist of songs that inspired Conjure is such an eclectic and interesting listen. What music will you be listening to on tour?
I think it’s as eclectic because we all have different musical tastes. When I’m on the road, my choice is always to go with atmospheric or really reflective music. There’s just something soothing about traveling and listening to a soundtrack to a drive. I tend to get really introspective in those moments, so I guess I listen to sad boy music when I’m doing that!

What are some of your tips for surviving a tour?
I would say you always want to have as many air freshening sprays as possible. That’s essential when you’re traveling in anything smaller than a bus, where there’s a lot of people in a small space and there’s various smells. And water, a resource that you don’t realize is so essential until you’re under the hot sun and you don’t know where you can find some good water at. Wherever we can find some sort of LIFEWTR or SmartWater, we’re happy.