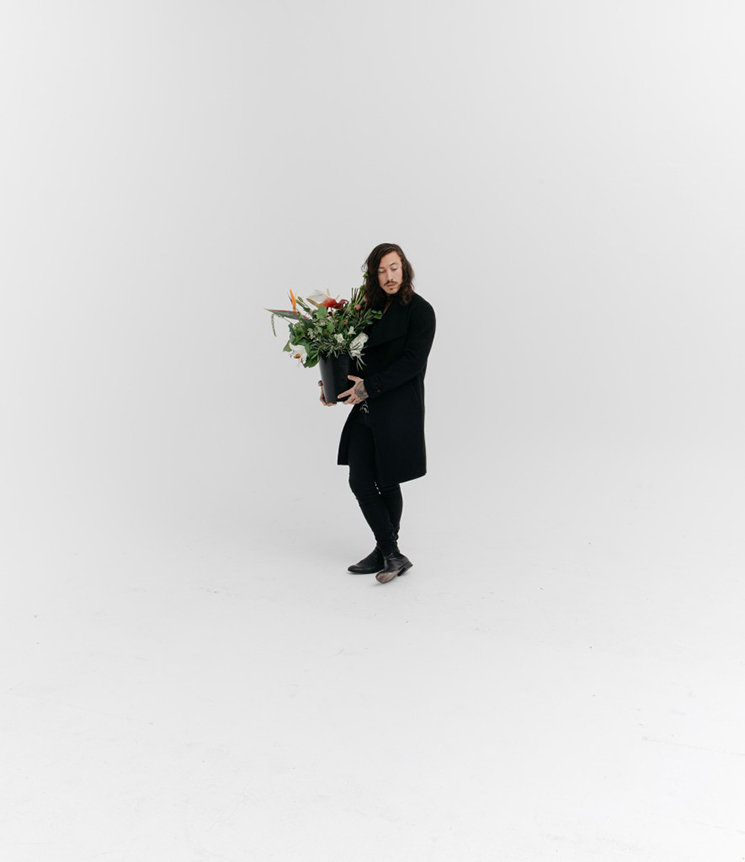 Noah Gundersen’s new single “The Sound” is a blast of indie-rock that in a few brief minutes, confidently announces both his new artistic direction and fresh sense of purpose. After releasing four EPs and two LPs filled with meditative folk, the singer-songwriter has effected a sea change on his soon-to-be-released White Noise—an album that sees him taking chances with his music, without losing his knack for deep introspection.

Recorded in his home state of Washington, the album’s 13 tracks amplifies Noah's acoustic palette to bolder, edgier dimensions, while leaving room for his signature sincerity, spiritual yearning, and existential questioning. From the unearthly beats of “Cocaine, Sex, and Alcohol (From a Basement in L.A.)” to the sweet chorus of “Bad Desire”, the result is a record that abounds in both feels and sounds.

Before embarking on his massive US tour in support of White Noise, Noah spoke to us about his new creative perspective, his recent UK/European tour, and his enduring love for music. Check it out below, and stay up-to-date with Noah’s tour schedule by tracking him on Bandsintown!

Could you share a highlight from your recent European tour?
Well, we had a hell of a night in Manchester and drank all the tequila in the whole damn city. Ended up in a basement pizza bar with a very drunk Irishman who said he hated most Americans, but I was “alright.”

White Noise is such an excellent listen that really showcases your growth as a songwriter. How would you describe your creative headspace when writing the songs on the album?
Diligent. There was a lot of trial and error that went into the process, and a lot of refining, more than I’d done on any other record. I was writing and re-writing lyrics and melodies over and over. I was being patient, and trying to make sure I was actually happy with the creative choices.

How would you say this album evolves, musically or conceptually, from your previous effort Carry The Ghost?
Carry The Ghost was never fully realized. I didn’t have the time, finances, patience, or experience to make that record what it could have been. I think I realized that after and didn’t want to repeat the same mistake. I’ve done some producing for other folks since those sessions and worked on other projects, which has given me a lot of creative perspective.

A number of songs on White Noise, particularly the first single “The Sound”, mark a departure from your acoustic roots. Was there a conscious decision to go for an edgier and more electronic sound?
There was a conscious decision to do something different. There were a lot of ideas along the way regarding what that would sound like—I think it ended up being a melting pot.

How do you think this new sound reflects the album’s lyrical content?
There’s a lot more room to breathe in the music, a lot more space between the words. In songs like "Wake Me Up I’m Drowning", I wanted the music to really embody the spirit of the lyrics, to almost make the listener feel uncomfortable, to have them experience the same feeling I was trying to convey lyrically.

What can we look forward to on your October US tour?
It’s a much bigger show this time around. I can’t wait to perform these tunes with the band.

The other day in London with @se7enlayers for a session. Link in their profile. Photo @bizza25

What do you enjoy most about touring and playing live shows?
There's an energy connection that happens sometimes, like a feedback loop. It's an incredible high and I think those are the nights all musicians live for, where you sync up with an audience and they sync up with you. It's intimate and spiritual and almost sexual.

What are some tour essentials that you don’t go on the road without?
Water. I try and drink lots of water.

What are some things that keep you motivated, to keep doing what you do?
I dig music. I’ll always dig music. And I dig making it with my friends.