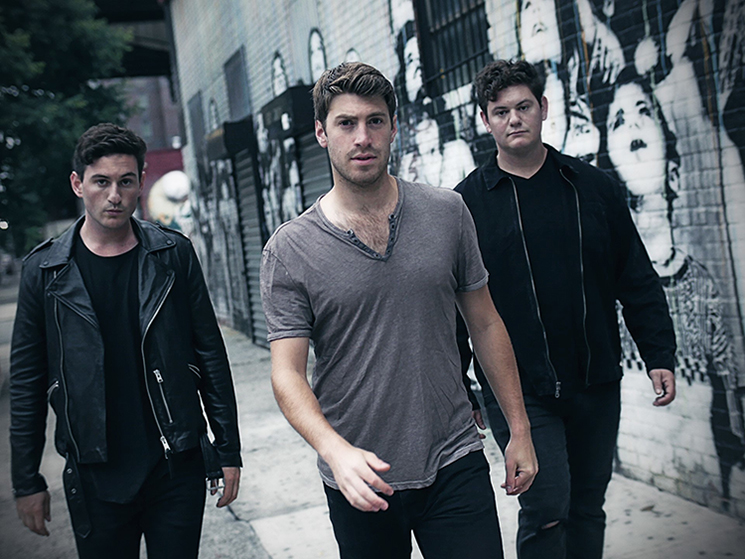 In 2015, Ben Schneid, Jon and Jared Stenz entered a cabin in the woods of North Carolina to make music. Six weeks later, they emerged as FOXTRAX—a name inspired by the animal footprints they found outside their temporary home—with songs that would come to fill their debut EP. Since then, the trio’s nimble alt-rock sound has taken them far and wide: their debut single “Underwater” was an Alternative Spotlight track on Apple Music, and over the summer, they got to hone their live chops on a North American tour supporting Barns Courtney.

Now on the cusp of something big, FOXTRAX is promising us tighter and more confident songwriting on their upcoming sophomore EP, Nothing Lasts Forever—with first drops “Grey Morning” and the title track packing heavy emotional punches. We chatted with guitarist/vocalist Ben, who let us know about the LA-based band’s origins, chemistry, and love for U2.

Make sure to Track the trio on Bandsintown to stay up-to-date with all their touring news, and be on the lookout for an exclusive download in the coming weeks!

What drew the members of FOXTRAX together? What were your first impressions of each other?
Jared and Jon are brothers so I suppose that fate drew them together. Jon and I are the same age so we knew each other from childhood. For some reason, he had this energy that drew me to him. When we first started the band, I thought Jon had the “It” factor. When Jared came and played bass the first day and we all played, it was instant chemistry.

Did the band consciously work toward developing a particular sound, or did it develop naturally? What are some of your collective inspirations?
I think in the beginning we thought more consciously about emulating some of our early-2000s rock influences. I think Coldplay and The Killers had a really big impact on our early sound. As we began to play more together, though, we didn’t think about that anymore. We just play and it sounds like FOXTRAX.

The three of you holed up in a cabin in the woods to write your first EP, and it seemed like an incredibly formative period. How was life like in the woods and in such close quarters?
It was probably the most innocent and blissful period of our lives. Everything was so fresh and exciting and we just had the best vibes of all time. It was like a vibe fest out there in the woods filled with coffee and non-stop tunes.

You also relocated to Los Angeles after The Cabin to work on your live show. What did that involve?
It involved many hours inside the garage of a wonderful family in Calabasas who mistakenly "put their lives in the hands of a rock and roll band," which as I’ve come to understand, is something you should never do!

How much has playing live and touring helped the band evolve?
I think touring was probably the biggest factor in taking our band to the next level in every way. We had the incredible opportunity to tour the nation with our boy Barns Courtney. It was, first and foremost, an absolute jam of a time! It made us incredibly tight and allowed us to learn how to engage a big audience every night.

How would you describe a FOXTRAX live show from the perspective of the stage?
A lot of smiles followed by innocent secrets between neighboring listeners! Wide eyes and full hearts—so righteous!

How does the band get pumped up before a show, and how do you wind down after a show?
The band gets jacked up by watching live videos of U2 playing songs from The Joshua Tree, with a lot of screaming, yelling, and pretending to be Bono. Afterward, there is no winding down—you just let the post-show high run you down until you fall asleep and do it all again.

What can we expect from your upcoming EP, Nothing Lasts Forever? How has the band grown creatively since your first release?
I think this EP is way tighter both in the playing and the sounds. The lyrical storytelling is a lot more descriptive and emotional. The band overall is just a lot more mature now than we were the first time around. We're very excited to see how people react live to the new stuff!

Is there an artist or a band whose career you really admire?
I think if we had to draw it up, we would love to do it like Coldplay did. They nailed it right from the first album, and got better and better with each record. They were always at the forefront of music for like 10 years. It seemed like every other band just copied them after they set the bar. That is badass and we admire the hell out of that.

What are your hopes and dreams for the band?
I hope that we change people’s lives and inspire them. Music has touched us so profoundly. Our favorite artists have made our lives better and made this world more enjoyable to live in. I hope that one day FOXTRAX can join that elite group of artists.