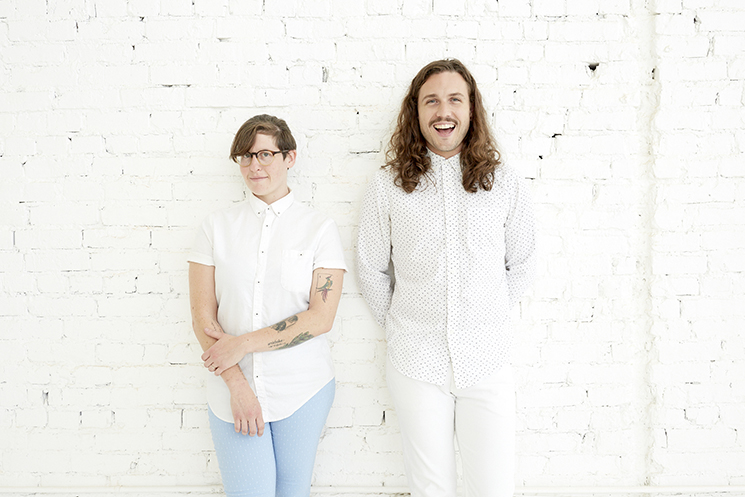 Even the most difficult and disorienting times won't crush SISTERS' spirit. Since the release of their debut album, Drink Champagne earlier this year, Emily Westman and Andrew Vait have championed positivity as an act of revolutionary defiance against political and social oppression. Happiness, after all, can be radical. Their synth-driven songs such as “Back 2 U” and “Trails” are buoyant, affirmative gems that urge listeners toward personal and communal joy, and of course, the dance floor.

Below, we catch up with Emily and Andrew before they left for their European tour to talk first impressions, making their new album, and their ongoing quest to find a solid cup'a joe.

Do you remember your first meeting? What was your first impression of one another and what made you want to work together?
Andrew: I first became aware of Emily as the pit drummer for Bat Boy: The Musical at University of Miami, where we both attended school. There was a buzz about the musical—namely because it is super bizarre, look it up—and more specifically, about this “female drummer” (I would call her, you know, a drummer) who was lighting the place on fire. It was a great show.
Emily: My ex in college knew Andrew before I ever did and we ran into him at a party. She was like, “That guy’s a real space cadet.” Obviously, I gravitate toward space cadets so things really worked out for us!

Congrats on Wait Don't Wait! What was the most memorable moment you had while making the album together?
A: Emily had this idea for a bass part for “My Little Head.” For some reason, the rest of us were acting skeptical about the part (we were three dudes in the control room, so big surprise there). The engineer called in to Emily that he was rolling, and when the bridge came along, Emily slid into that Sly & The Family Stone groove that's on the record, and Patrick (the producer) and I looked at each other like someone farted. We all three dudes in the control room kinda said in unison, “Ooohhhhhhh,” and then died laughing because it was so sick.
E: We recorded nearly all the vocals over a day and a half and we were standing in the same room just facing each other only a couple feet apart. We were so exhausted and not even sure what day or time it was at this point and it felt like we were gonna cry singing all these songs together just staring right at each other. We sung most of the tunes in just one or two takes.

The LP was written and created in a cabin on Washington’s Whidbey Island. What did 24 hours look like there?
A: Sleep in (9 a.m.), drink espresso (we bring our own machine from Seattle), eat yogurt and berries while we listen to demos from yesterday, leave bowl of yogurt because we're excited about an idea and go work it out, maybe finish yogurt, work on new ideas, forget to eat lunch, work on new ideas, maybe eat dinner (bag of potato chips), drink espresso, work on new ideas until the neighbors call.
E: It looked like we were captains of our tree-fort, peering out into the woods, pounding coffee, and just pouring out jam after jam. I had no concept of time passing when we were there.

Your new album title is brimming with positive urgency—what are some things you simply cannot wait for/are impatient about?
A: In larger sense, the dismantling of white supremacy and folks learning up on gender inequality. All that shit has got to go. I also can't wait for Pride 2018. We had such a nice time on a pride tour this year, and we have some really exciting collaborations lined up for next year.
E: I can’t wait to feel a sense of balance and contentment in my personal life, and outwardly in my community, and the world, and the solar system.

What did you learn from the making of your first album that you applied to this one?
A: To get deep in there and wrestle with those uncomfortable ideas. I honestly don't remember recording half of the stuff we played on Wait Don't Wait. It's like we went into a trance or something. I guess that would be my advice for myself for the next album—go even more lucid.
E: I learned to worry less about nailing a part to get a perfect/clean result and instead, try and play my heart out and don’t worry so much about perfection. Imperfect, powerful results ARE perfection.

The SISTERS sound is relentlessly happy, infectious, and affirmative. What are some songs that similarly fill you with joy?
A: “Everyday People” and "(Your Love Keeps Lifting Me) Higher & Higher" are my jams right now. If you can sing “Best of My Love” well, I want to hear that shit. Also, I will always throw down on “All Night Long” if there is karaoke.
E: “Puff the Magic Dragon”.

Beyond times at @rifflandia - we can't wait to come back to Victoria!! Snag tickets to our release show at @neumos_ on October 19th, link in bio. Photos by @kirstenjamescreative and Lindsey Blaine c/o @rocktographers ❤️❤️ #waitdontwait

How would you describe a SISTERS live show? What’s the view from the stage like?
A: It's great fun! For the Wait Don't Wait release, on my side of the stage, I was surrounded by synths, saxophone, flute, a Fender stratocaster, and a Silvertone 1454 guitar rotating clockwise, and each instrument was played extensively. We're actually working on creating more visibility for me because I'm so enveloped by instruments that I can't really see the audience.
E: The view is generally a sea of smiling, charming people dancing and jumping around. What a joy!

How was your first-ever live show like on a 1 to 10 scale?
A: 1 and 10 at once. Our sound setup at the time was a consummate disaster; we were daisy-chaining all of our gear into one looping pedal and then out to the mains via one channel. I often wonder what the audience actually heard that day. I think we even tried to loop tablas. But it was so fun—we were trying to get back to that place that made you run home from school in seventh grade because you just bought a guitar and you couldn't wait to play through “Smells Like Teen Spirit” with your buds.
E: We had too many things going on and my keyboard kept falling off the (tiny) stage and my friend kept running over to catch it. It was like that Man Ray photograph of Dali with everything up in the air and about to fall. Total suspension. But it was so fun.

The band’s music is definitely made for dancing (see: the video for “Buck”). What are some of your own patented dance moves?
A: Emily has one dance move that I know of where she kinda smiles and doesn't move her shoulders but instead her entire torso, and she dips her knees and sometimes tilts from side to side. It's so stinkin’ adorable.
E: Andrew does the gnome dance and it’s my favorite thing maybe in the world. He slouches down and scrunches his body up to be smaller somehow and wiggles his arms around like a t-rex trying to boogie.

What do you hope the future holds for SISTERS?
A: We really push the “you should give a shit about other people” narrative because it just fucking needs to be done. So, it would be nice to feel like we could relax on that a bit, but I don't see that happening anytime soon, so you know where we'll be...
E: Blue M&M’s in our green rooms.