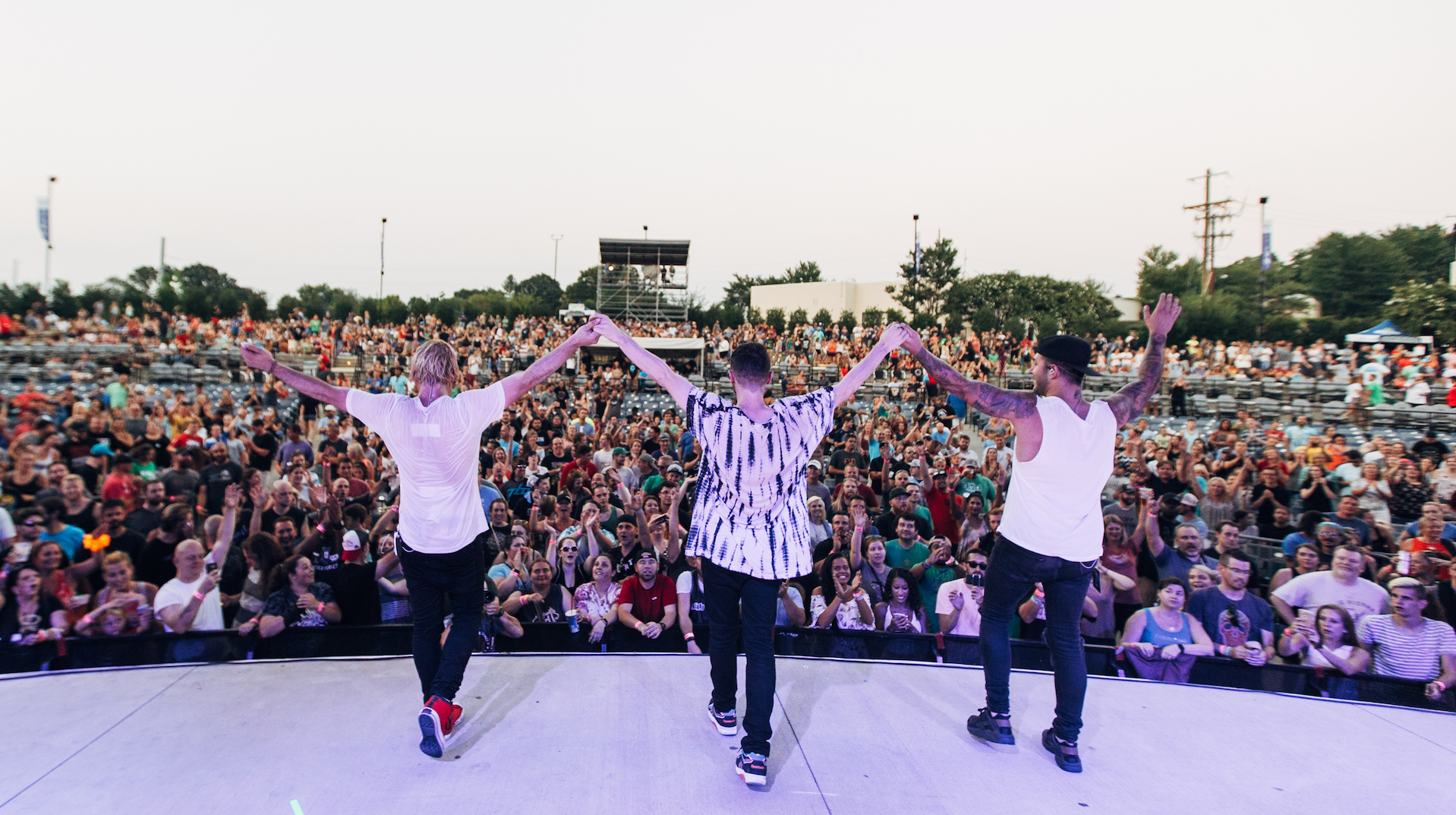 Since New Politics joined forces nine years ago, they’ve made a serious mark on the music scene. The group, comprised of David Boyd, Søren Hansen, and Louis Vecchio, made their presence known on the Alternative Radio Charts with their exuberant pop-punk sound, and worked the Late Night TV circuit with appearances on Jimmy Kimmel Live, The Tonight Show Starring Jimmy Fallon, Late Night With Seth Meyers, and CONAN. With four studio albums under their belt, the Copenhagen natives have proven that they’re not going anywhere any time soon—in fact, they’re just getting started.

Their latest release, Lost In Translation, features 10 songs that range in tone and attitude. The album blends themes of inclusivity and maturity with a fun-loving, wild-at-heart spirit. One of our favorites, “Color Green”, is a standout emotional ballad that perfectly balances out the upbeat, infectious energy that runs rampant throughout the rest of the album.

In support of their 2017 LP, the trio will be embarking on a 32-city North American tour starting this Friday, February 16. The “Harlem” creators will be making stops in Chicago, Detroit, Denver, San Francisco, and Boston before heading off to perform at BottleRock Festival in Napa, California in May.

As die-hard fans of the dynamic trio, we had to know what they'll be jamming to in-between shows. We got the inside scoop from frontman David Boyd, whose taste is just as eclectic as we imagined it'd be. From Talking Heads to Michael Jackson to Nirvana, check out Boyd's Tour Bus playlist below, then make sure to track New Politics on Bandsintown!

'Killing In The Name' - Rage Against The Machine
Track

"This is my jam, it always puts me in a rebellious mood. I remember my friend showing this song a while back and I played it on repeat for weeks. Still to this day it makes me want to go apeshit!"

'We Will Rock You' - Queen
Track

"In general this has got to be one of the greatest band and singers. Catchy as f*$& but so simple and stripped in just the perfect way. A timeless anthem!"

'They Don't Care About Us' - Michael Jackson
Track

"Yeah I know, he’s the king of pop, but this song in particular is straight up bangin’ — the beat is so original and grabs you in this trance, and his vocals have this nasty aggression vibe that cuts through with this street kinda rock credibility but still MJ pop melodic. All topped off with that guitar riff building and added intensity = Bad a$$!!"

"One of my favorite bands and not particularly for their musical talent (as I’ve learned to accept in my ‘older, more experienced age’ lol) but it’s more this fresh new energy and vibe they brought to us kids at the time and the music just made me think, feel, and dream differently ever since!!!"

"I was never into Pantera as a kid. It took me a little to appreciate metal in general, but when I heard this particular track I was blown away, not only by the drumming but the melody which is super catchy - still nasty and dirty."

"Pissed off sounding music is my favorite stuff to warm up and get amped for stage. I think "Raining Blood" is a staple for this. I feel like it’s also the metal song to listen to for people who don’t listen to metal all the time. It's that track that everyone drops in a convo about metal bands if you really don’t have anything deep to contribute. Which is definitely me.”

'This Must Be The Place' - Talking Heads
Track

“Simply one of my favorite bands and songs of all time, can listen to this song anytime and it’s makes me happy. A friend introduced me to this song a while back. For some reason it has always brought me to a happy place and I love feeling that before I hit the stage.”

"I listen to this and I think “will I ever be this good” (drumming) and then go and play the best show I can. This is a newer progressive metal band on the scene. The drummer in this band is unreal. He actually does shit that I didn’t think was possible. It blows me away and makes me want to become a better and more technical drummer."

"This song reminds me of my childhood. This is one of the first songs I remember hearing. My dad would make nets for fishing and I would just sit and listen to the music. The chord progressions and sound universe of the album Rebel Yell is probably a major subconscious reason for my personal taste in music and writing. I love listening to this specific song before I go onstage because it brings back nostalgia and makes me able to perform with more feeling on stage."

"I am a sucker for simple songs and heavy riffs before a show. Rammstein makes fun songs that put you in a good mood. They have the craziest live show out there and you can’t help get adrenaline flowing when you listen to to this before you go on stage."

"In my opinion it’s one of the best riffs ever written. Even though it’s a bass riff it’s probably one of the songs that turned me on to playing guitar and I bought my first guitar slightly after Absolution came out. Perfect song to listen to before a show."

'You Really Got Me' - The Kinks
Track

"Another phenomenal guitar riff. The Kinks were one of the first bands I really started listening to and they’ve had a huge influence on my guitar playing and writing style. Growing up I had a friend who was a drummer and he would always play me songs he had discovered (probably through his dad) and I think a song like "You Really Got Me" was a major reason why I wanted to be in a rock band. Live shows are full of emotions and just like "Eyes Without a Face" this songs fills me up with emotions so that I can perform our songs better."