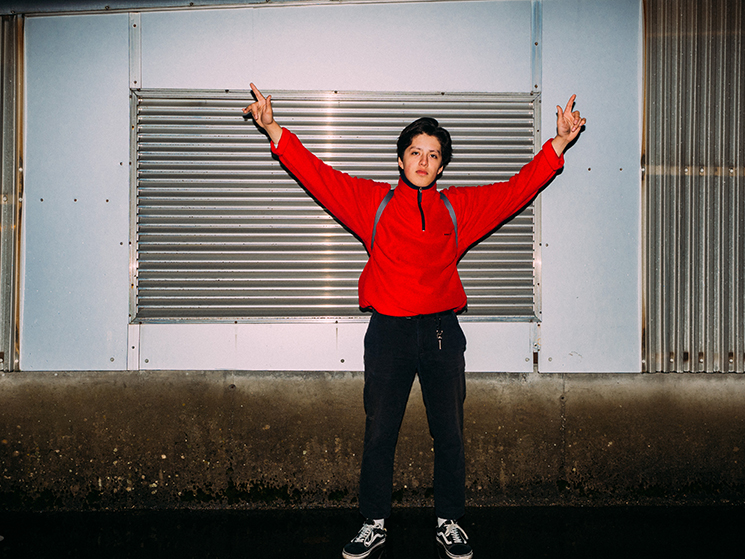 In May of last year, the internet was charmed by the sight of a young man, decked out in a pink hoodie and shorts, standing on a pier with four of his friends, playing a mellow, indie-pop jam. However unadorned and unassuming, the video for “Everytime” would grow to become a viral hit, chalking up more than five million views and casting its squinting star, Boy Pablo, into the spotlight.

Fronted by the 19-year-old, Norway-based Pablo Muñoz, the group has more than that one hit video under its belt. Following two singles in 2016, Muñoz dropped Roy Pablo, his first EP, which contained six laid-back gems that soundtrack a post-millennial bittersweetness with woozy choruses and a clear, ringing guitar sound. A number of rousing Scandinavian shows and festival dates have followed, generating enough offline love to match his online cachet.

As Boy Pablo prepares to head out on his first European tour, we got in touch with the rising star, who talks YouTube comments, outsized thumbs, and what he’s packing to meet his bright future. Plus, just for us, he's compiled a playlist of his all-time favorite tunes—listen up!

Hello Pablo! Where are you right now and what did you have for breakfast?
Hey, I’m at my girlfriend’s house. I had some Coco Pops, a chocolate-flavored cereal that I eat every day for breakfast. It’s really good.

Your “Everytime” video has been a viral sensation. How, if at all, has internet success changed your life?
It helps on inspiration. I think I would be making music regardless, but knowing that people actually listen gives me an extra push to do more and better.

What inspires you to create a day-to-day basis?
It’s very satisfying to make different sounds sound good together. It’s like doing math. You know the feeling when you break the code and it feels really good? That’s how it feels.

Do you remember the “ah-ha” moment when you realized you wanted to be a musician?
I don’t think I’ve had an “ah-ha” moment related to becoming a musician, because I’ve always done music. I’ve played the drums since I was five, and then, I started playing the guitar when I was about 11. So I’ve always thought that this was what I was gonna do when I grew up. Like most musicians, I never necessarily knew how to get there and I still really don’t, I’m just going with it.

You have a sharp knack for songwriting, as evidenced on your Roy Pablo EP. But what are some useless talents you have?
I have big thumbs compared to the rest of my fingers (which are all pretty average length, I guess), which gives me a huge advantage in thumb war. I also like to think that I’m really good at FIFA. Maybe that has something to do with the size of my thumb too, I don’t know.

What are three words you’d use to describe your live shows?
Awkward, sweaty, and loud.

You’re headed out on your first European tour in March. What are some essentials and non-essentials you’ll be packing?
I haven’t started thinking about packing yet, but I’ll definitely bring my Super Nintendo. Hopefully, we’ll have a TV backstage on some of the venues. My phone, my guitar, some clothes, maybe a book and a pair of slippers? All essentials.

How would you describe your fellow band members and how would they describe you?
Sigmund (drummer) is one of the funniest dudes I know, and he does a great Arabic accent somehow. Eric (keyboardist) is probably the most daring; he never hesitates if someone throws a challenge at him, especially in public. Henrik (bassist) is the calmest dude you’ll ever meet and he’ll probably make a great husband someday. Gabriel (guitarist) is just a really good dude, but he has a weird obsession with shoes/sneakers. Although most of my friends would describe me as a pretty laid-back dude, someone in the band found a comment on the “Everytime” video that said “Pablo is the kind of guy that would slap his own ass during sex,” which is maybe a more exotic alternative description?

Whose musical career do you most admire?
I think The Beatles had an interesting rise to fame. They went from being just one of many bands that played a certain style to becoming these legends. That’s pretty cool.

One day in the future, when you’re 80-years-old, how would you tell your grandkids about this period of your life?
I’d tell them that I was the king of internet back when computers and the internet were still a thing. And that it was all because other kids liked to watch me and my friends squint.