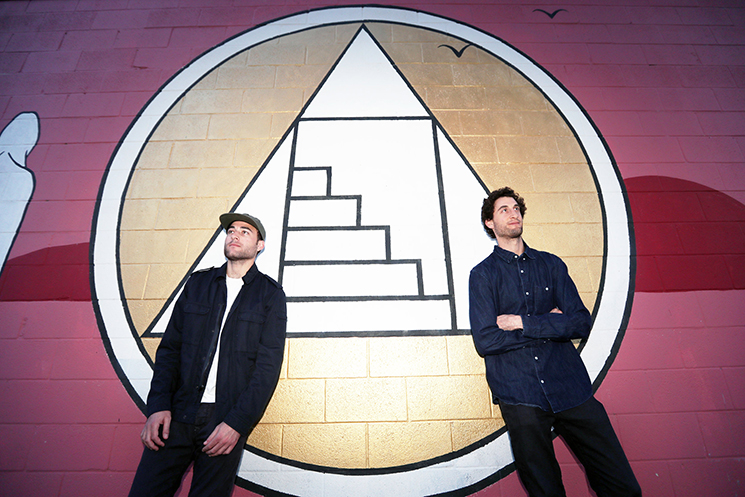 California natives Joey and Ryan Selan may have relocated to Austin, Texas three years ago, but in no way have they forgotten the West Coast’s mellow-gold, feel-good vibrations. In 2016, the brothers unveiled their debut single as The Lagoons, unleashing an easy pop sound so unflappably laid-back and sun-dappled you could pretty much feel the sand between your toes. As if there were any doubt about its inspiration and source material, the track was, of course, titled “California.”

Since then, The Lagoons have released their first EP, Gems—a platter of more balmy grooves and saxophone solos—to equally warm reception. In multiple venues across Austin, Texas, the duo has also earned its stripes and honed its live chops in anticipation of bigger stages ahead. As you read this, the brothers are prepping the release of their follow-up EP, Escape, led by the velvety single, “Close My Eyes (And I Wonder).' A second single, "Escape," drops today and before anyone else, have an exclusive listen below.

Now, ahead of their slot at the Bandsintown Official Big Break Showcase at SXSW on March 14, we catch up with Joey on how life in the studio, on stage, and in a band with a brother has been treating them.

Hello Joey and Ryan. How is work on the Escape EP progressing? Can you share in three words what this EP is going to sound like?
Hey, thanks for having us! Our second EP is set for an April release. In three words, we’d say the EP will be full of “chill, groovy vibes.”

How do you feel this new release follows up or evolves from last year’s Gems EP?
We’re really proud of this new EP we have coming out. It picks up where Gems EP left off, honing in on many of the same groovy vibes but also incorporating some new experimental and electronic elements as well.

What were you trying to accomplish lyrically with the first single off this EP?
Our first single, “Close My Eyes (And I Wonder),” was actually written a few years ago and later was revisited. The lyrics originally had to do with some of the thoughts and questions that run through people’s minds about death and the afterlife. What happens after we die? How does it affect the actions people take in their everyday lives?

“California” was a fantastic debut single that brilliantly captured the West Coast’s mellow vibes. What would a track inspired by Austin, Texas sound like?
You’ll hear soon when Escape EP is released! After living in Austin for a few years and seeing tons of local live music, it’s definitely had an influence on our songwriting and production.

We also dig how the saxophone is woven into your tracks like “Gems” and “Rainbows.” What are some saxophone-led tunes that you’d recommend us?
Pretty much anything by Steely Dan is a winner to us. We’re also big Dave Matthews Band fans and have been influenced with the saxophone in his music as well. “#41” by Dave is a good one to start with.

How, if at all, did your experience in a middle school jazz band lay the groundwork for your musical career?
It helped us get us into a mindset from a young age of learning how to improvise on an instrument and play together with other musicians. It’s not only helped us with our musicianship, but also with our live performances and our songwriting. Also, who knows if either of us would have ever have gotten into music later if we hadn’t started from a young age.

How have the many shows that you’ve played around Austin helped to shape your sound and live presence?
There’s so much live music in Austin and talent in this city that you have to do something unique to stand out in this town. Being surrounded by so many talented musicians, we constantly find ourselves being pushed out of our comfort zone which has made us more confident as musicians and songwriters.

Last night was groovy 😎 Thanks to everyone who came out to @stubbsaustin for an unforgettable show! Next stop ➡️ SXSW

Describe the view from the stage at one of The Lagoons’ live shows.
A crowd full of beautiful, smiling faces swaying back and forth to the music.

What is the best thing and the worst thing about being in a band with your brother?
It’s great, to be honest. We also live together, so we see each other quite a bit. But it’s good because we work really well together and can cut out all the nonsense and get straight down to it if we need to. We’re family, so we definitely will have our moments but at the end of the day we look out for one another and are passionate about achieving the same successes for The Lagoons.

Are there any bands formed by brothers that you look up to in any way, and why?
There are a few brothers that come to mind, but unfortunately it seems like a lot of family bands split up and end up hating each other (i.e. Oasis, Ween). We love each other too much to ever let that happen.

What are your hopes and aspirations for the band?
We want to make as much music as possible that reaches, connects with, and inspires people all over the world, and also have some fun while doing so.