ChartsNewsReviewsFeaturesLists
Bandsintown Big Break: Meet Sarah Shook & the Disarmers, The Beautifully Defiant Force Country Music Needs
+ RSVP to one of their upcoming shows for a chance to win tickets!
Feature
Share on facebook
Share on twitter 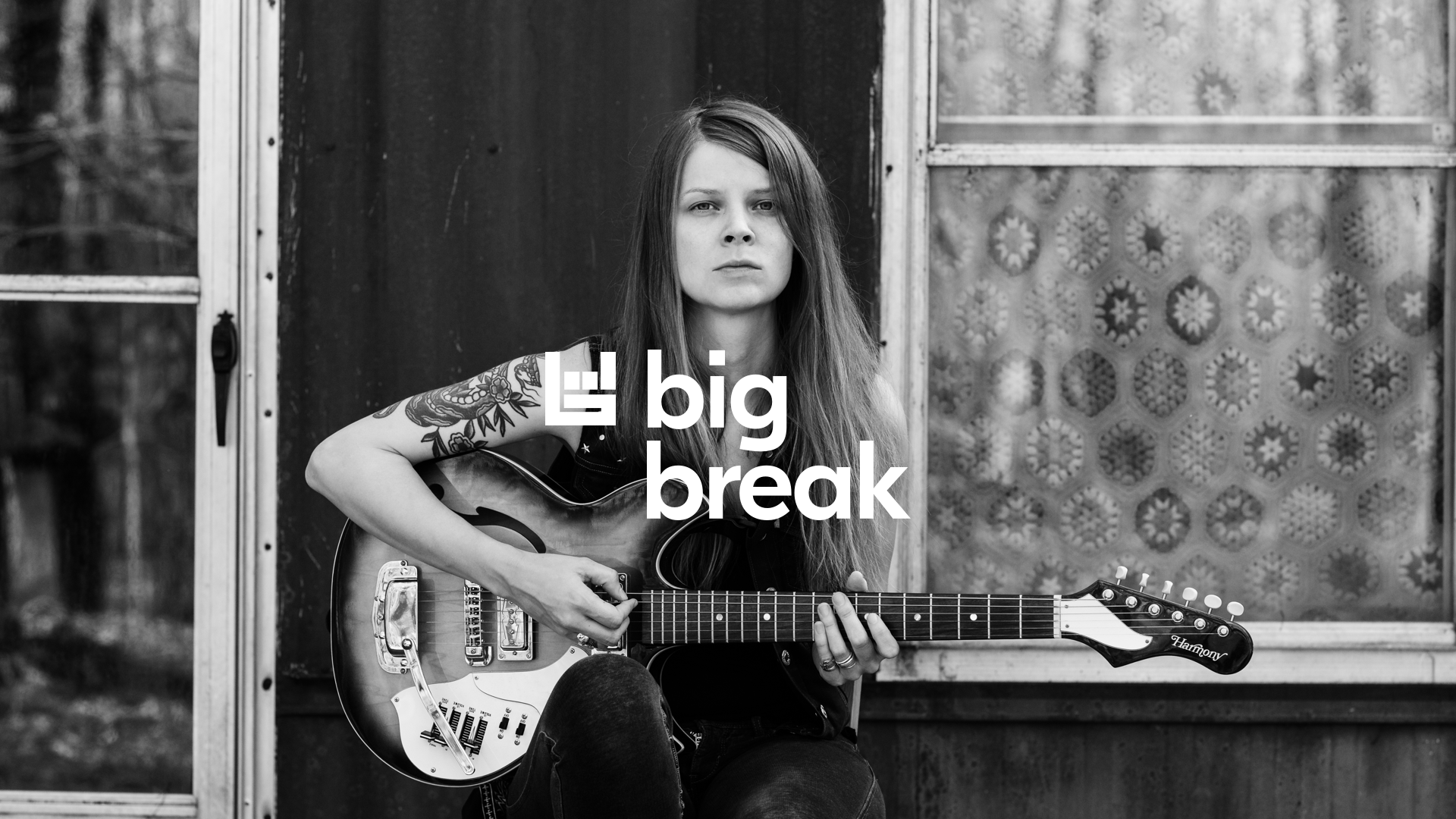 In a world where sugarcoated ear candy reigns supreme, Sarah Shook and the Disarmers are churning out Americana classics that resonate. Fearlessly unconventional, brutally honest, and refreshingly raw, the North Carolina frontwoman has true grit for days, something listeners can detect about eight seconds into the group's epic new album, Years. Released on April 6, the sophomore LP is a genre-bending force of nature, brimming with tracks that tackle breakups and daily disappointments, and drinking until the sun comes up because of both topics.

When she's not recording killer records, Shook is championing both LGBTQ and women's rights in her local music scene. Along with friend and activist partner, Erika Libero, the "Good as Gold" creator launched a two-day music festival in her hometown of Chapel Hill that aims to combat the male-dominated lineups that've become all too familiar in recent years.

A badass in every sense of the word, we're ecstatic to have Sarah Shook on board with our Big Break program. A month after the band rocked out our official SXSW showcase in Austin, we chatted with the lionhearted songstress to chat about what inspires her to create, upcoming shows in Europe, and the highs and lows of life on the road.

Also, make sure to RSVP to their upcoming shows in April or May for a chance to win two tickets. Find our more from Shook and the Disarmers below, then RSVP here!

Hey, Sarah! We haven’t seen you since our Big Break showcase last month, where you absolutely crushed it. What was your favorite moment from the showcase? SXSW 2018 as a whole?
Smack dab in the middle of soundcheck the monitors mysteriously went out and our sound tech, Andrew, was having a hell of a time figuring out the cause. He and I ended up crawling around the stage, checking cables and connections, and pouring over the sound board for answers. He found the culprit and there was this hilarious joint sigh of relief and I can't think of a better example of tour life, problems pop up, you stick with your people and work em out, and you laugh about it later. The show was a total blast and the audience was so damn great, but Andrew was the hero of the night! Never forget the folks who work so hard behind the scenes, sound techs, door people, bouncers, bartenders, these are our people and we love 'em.

My total fav SXSW takeaway was at Licha's for the Brooklyn Country Cantina. We'd played some hours earlier and with duties done for the day me and the boys were up to our ears in tequila and beer. Our road buds the Trongone Band were on stage at this point and it turns out I can two step like nobody's dang business. Two steppin' in Austin when the night is warm, the music is perfect, and the tequila is endless. What a total blast. Everybody there was downright beaming.

Your new album is out Friday, April 6—congratulations. What one thing you hope fans take away from this record?
Thank you so much, we're beyond stoked to release Years. If it had to just be one thing, I'd say I hope it gives people the nudge to really believe in themselves, and to really believe they're worth sticking up for. Love yourself fiercely and take no shit.

What do you think has changed the most in your life since the first album came out?
Our touring schedule changed exponentially last year with the release of Sidelong and there is zero doubt that we'll be hitting the road harder than ever before in 2018 to promote "Years" with tours all over the states, west coast, Scandinavia, Canada, and we're gearin' up to announce a UK run happening in the fall. Touring is tough damn work and not for the faint of heart and I'm grateful to have bandmates who are all in, on board, boots on, and ready to do the damn thing.

You currently reside in Chapel Hill, where I’m also from, but you grew up in Rochester, NY. How do you think moving to the south influenced your songwriting/music as a whole?
I'd been writing country songs before I'd ever heard country music, moving to the south and hearing traditional and outlaw country music for the first time was not only like a homecoming, it was like getting my feet 100% under me and totally nailed home for me that this was what I wanted to do.

You do a lot of incredible work for the LGBTQ community in North Carolina as well. What was the idea that sparked Manifest? What are your hopes for the festival’s future?
There was this post circulating social media platforms of major festival posters where someone had removed all the names of bands with only men. And the number of bands with one or more women was so staggeringly and ridiculously small the posters were almost empty. My activism partner and fellow badass woman musician, Erika Libero (Henbrain, de Fontaine) and I came up with this super simple idea: throw a two night, three venue music festival in Chapel Hill with one requirement: every band had to have at least one woman, woman identifying, or non binary member. It went off without a hitch, we've had it two years in a row, and I can't wait to see what happens this year!

Which musicians do you look up to most as songwriters?
Kelsey Waldon is my favorite songwriter in the country genre right now but I've also been digging Alex Maas from the Black Angels (and his brand new band/project MIEN), Tomboi, and L.A. Witch. Also P.S. Ty Segall forever.

What are three words you’d use to describe your live shows?
Real, wild, cookin', in no particular order.

How would you describe your fellow band members and how would they describe you?
Eric Peterson dang! Dude has stuck with me and my music for comin' up on eight years. He's quiet and observant and curious about everything. He is probably the kindest, most gentle person you will ever meet. And the shreddin'-est when it comes to electric guitar. Aaron Oliva is our upright bassist, he's super chill and likes to think ahead of the game, he's a great problem solver and wonderful friend. Kevin McClain is our new drummer and it's been pretty damn cool getting to know him, he's smart and likes to bring his bike on tour and has this totally sardonic/self deprecating sense of humor, I love it. Phil Sullivan played lap steel on Sidelong and pedal steel on Years but won't be hittin' the road with us very much this year; just the same he is a solid citizen, super sharp, a total walking catalog of music knowledge, and funny as hell. Adam Kurtz will be touring with us on pedal steel a good bit this year and he's the newest addition. Adam is a total lunatic in the best way, always up for adventure and down for fun, had a blast with him on our most recent tour and hope he can hit the road with us as much as possible.

Best part about being on the road? Worst part?
It's kinda tough to just pick one best thing. I know a lot of people just ain't cut out for touring, it can be stressful and weird and just flat out tough. But I love it. I totally adore it. I love playing new places and new towns I've never been to, meeting new people, making new friends, forming alliances and finding new drinking buddies. I love the chaos of it, how steady the madness and unpredictability is. Sex, drugs, and rock n roll is a thing and it's what I was dang built for, it's all I know how to do. And the worst part of tour is always trying to find someplace to do laundry haha.

You’re playing a ton of dates in Norway and Sweden in the coming months, very cool. What’s one city (can be anywhere) you haven’t played yet that’s on your bucket list and why?
Um, Stockholm! I am so stoked to play Stockholm, but also very excited to meander through the rural parts of Sweden and Norway and play the hole in the wall bars in the small towns. I love it all and it's all a rush.

What do you hope 2018 holds for Sarah Shook and the Disarmers? How would you define a “Big Break”?
I've said it before and I'll say it again, 2018 is the year of the Disarmers. We've been workin' super hard and we're starting to see the relentless, dogged, days in the trenches pay off. It is so incredibly rewarding and satisfying and I couldn't be prouder of my band. And that's exactly how I would describe a "Big Break", not something that falls out of the sky, not something that is just handed to you, but something you have strategically worked towards, hell bent, for a long ass time, that finally, FINALLY, pays off and gives you some love right back. Thanks so much for havin' me.