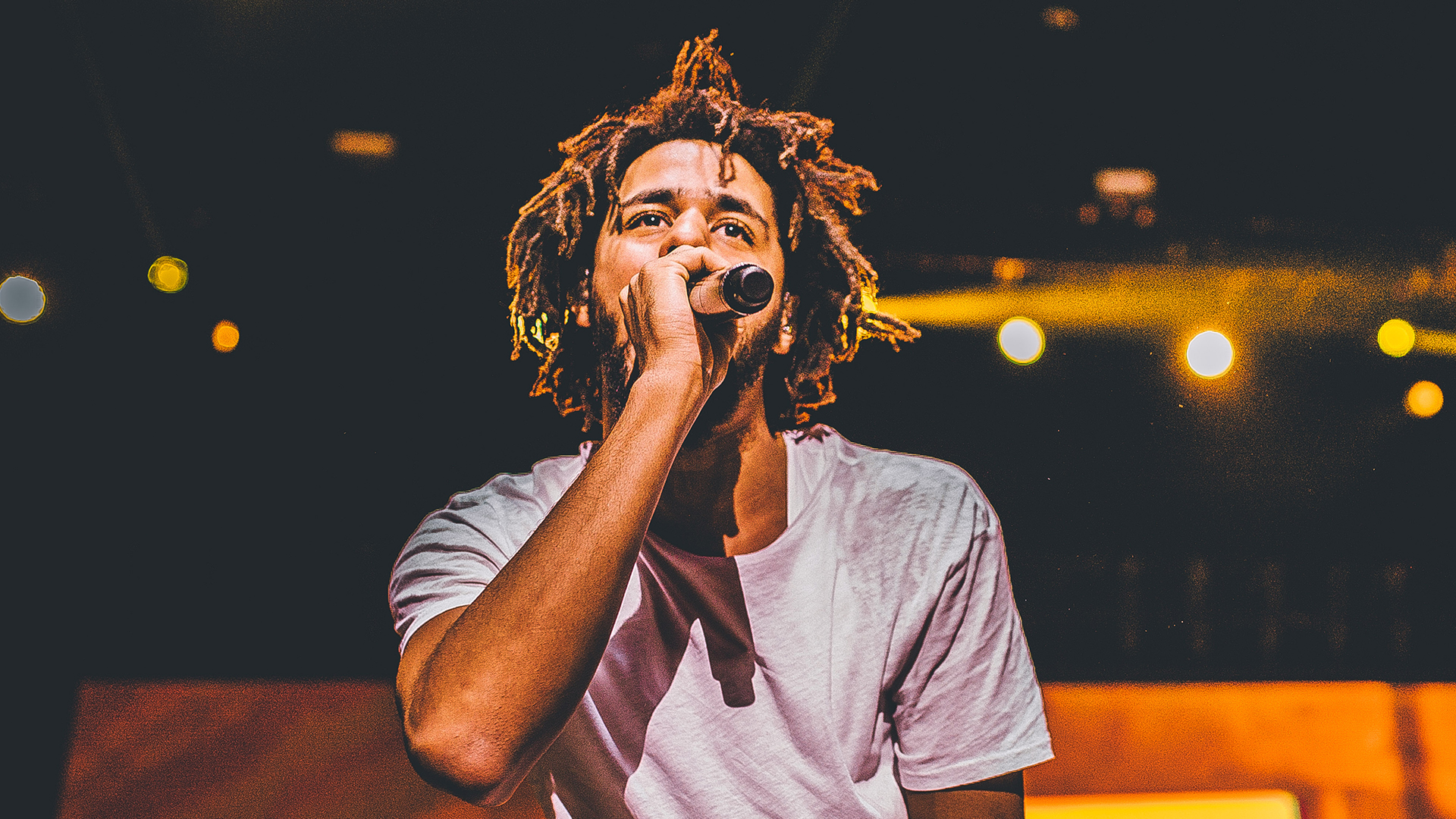 It was 5:45 p.m. in New York City when suddenly, the atmosphere in Manhattan shifted. From the line that wrapped at least five blocks on an East Village corner to the inside of the intimate Gramercy Theater on Park Ave South, the energy and anxiety were palpable since J. Cole tweeted a mysterious purple flyer announcing a first come, first serve free show that Monday. After a few hours waiting outside asking ourselves what the hell was about to happen, here we were, the lucky 500 people who bolted as fast as they could to get that orange wristband. We didn’t know what we were going to witness, although we were aware we wouldn’t be able to capture any of it due to the strict no phone policy.

What we did know was enough: J. Cole, one of the finest and most puzzling names in hip-hop, was about to deliver everything we needed—whatever that was—out of nowhere, as per usual. And it wouldn’t make sense for it to go down anywhere else other than the one and only big city of dreams, motivated by schemes. What a way to start the week.

As he finally walks on stage, the crowd goes absolutely insane. You could feel that the entirety of that tiny room, including Cole, was genuinely honored to be there. He proceeds to explain to us that, yes, we are indeed the luckiest motherf*ckers in the city who are about to listen to his new album before anyone else. KOD, he introduces, has three meanings: Kids on Drugz, King Overdose, and (my personal favorite) Kill Our Demonz. He explains that he made the album in only two weeks—something he’s never done before—and that it was one of the smoothest processes of his career, with the three title meanings coming to him naturally. At that point, we knew greatness awaited us.

Officially dropping on Friday, April 20, KOD is certainly Cole's best work to date. Following the 4 Your Eyez Only pattern, the North Carolina native continues to approach conceptual narratives, but this time, offering what he lacked in his last projects: experimental, textured, and heavier beats with a flow that shows much more vitality, movement, and agility. Same Cole World, new mood. In 4 Your Eyez Only you could feel his vulnerability, burdens, and concerns, in KOD you can feel that he’s out to get it. J. Cole is back, on fire, and hungry. Hungry to send a message like never before—a message that needs to be told, with ideas that need to be shared, packed with art that motivates you and makes you reflect.

KOD is mainly about addiction: drugs, painkillers, toxic relationships, people, sex, phones, ego, social media. The lyrics touch delicate topics such as the opioid epidemic in America, the system that insists on handing us pills to numb our pain, overcoming our fears, creativity, motivation (and the lack thereof), healing, thriving, and growing from struggle. Once he's done with the introductions, he proceeds to sit on stage, and together with his loyal fans, we all get to listen to KOD for the first time ever.

Cole seems confident about his new project, as he should, considering it's probably one of his best compilations so far. He plays us the entire album, about 12 songs, all which feature skeletal beats that fell on us like silk, with their layered basslines. He explains the titles, but also leaves room for interpretation for songs like “The Cut Off”, “Motives”, and “Window Pain”—some of my favorites from the night. As we all listen and start digesting the masterpiece that KOD is, I realize that Cole didn’t need the approval or the reassurance of his fans before dropping this album, he just needed to share something he's proud of with the people who appreciate it and support him the most first. Putting himself in our shoes like he always does so well, he simply wanted to give his fans the chance to stop the anticipation and listen to the backstory straight from the source, in the most intimate and real way he could.

KOD 4/20 Cover and back pic.twitter.com/2iUaKrI42F

Like the true empath he is, J. Cole wittily blurbs about vision, authenticity, addiction, trusting yourself, not trusting yourself enough, trusting yourself too much, but not knowing how to deliver. Creating, learning, teaching, evolving. He mentions how his own creative process consists of him going back and forth, setting the bar higher, always pushing himself further until he's completely satisfied with his creation. With words that capture a range of emotions, Cole proves that he has indeed mastered the art of word play, yet this time more aggressively and intensely than ever, in all the right ways. With the traditionally fierce substance of his rhymes (“I could paint a picture that’s vivid enough to cure blindness / It’s Carolina’s finest”) this time he favors vigor over obscurity and assertion over questioning. Of course, with his signature self-awareness, vulnerability, and sensibility of his surroundings.

I caught myself dancing alone with my jaw almost on the floor—with no phone or anyone to share that moment with—laughing at how insanely unbelievable that experience was; having J. Cole play his unreleased album and decipher it to me, first hand, before anyone else could ever have the chance to hear it. Intimate, detailed, sincere and as real as ever, he blurred the line between the creator and the creation, showing that he was there to listen and understand his work as much as we were. Turning music into energy and celebrities into real human beings, who feel, frisk, sense, and suffer just like us, Cole sat onstage; serene but thrilled, filled with passion and excitement over his new project. On a casual Monday, he made me respect and love his music more than ever, but mostly, it made me reflect on how to be patient, gentle and confident with my own creative process.