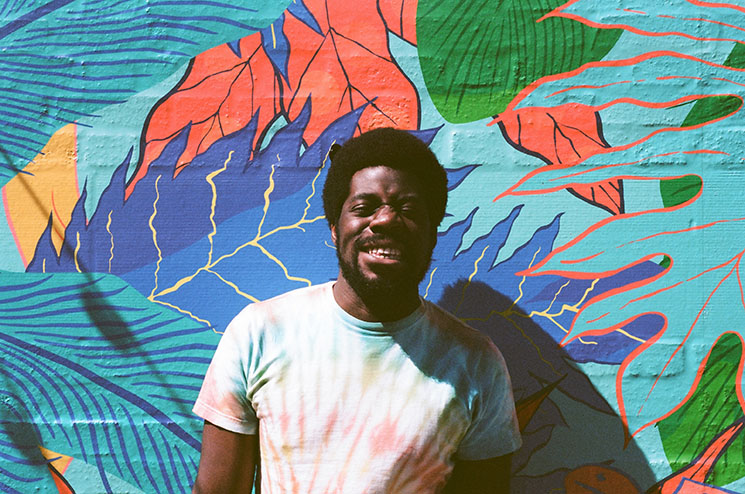 Don’t count on Nnamdi Ogbonnaya to sit still. Hailing from Chicago, the eclectic musician has mastered as many instruments as he has voraciously supped and sampled. Fusing elements of hip-hop, jazz, and soul, his music is otherworldly, juggling rhythms, genres, and rhymes with ease. The proof’s in his fantastic 2017 debut DROOL and its 13 propulsive tracks. Where “sHOULD hAvE kNOwN” boasts a math rock pulse, “Me 4 Me” makes use of cheeky electronic heartbeats and elastic wordplay, while album standout “let gO Of my egO” nimbly demonstrates the rapper’s gravity-defying flow.

This year will see Nnamdi continue to spread his good work across the country with a summer tour that stretches from Michigan to Kentucky. And all that when he’s not drumming for Chicago instrumental band Monobody, playing bass for punk outfit Teen Cult, running Sooper Records, among heaps of other projects.

When we caught up with the musician recently, we found him in a rare moment resting at home after a 14-hour drive from Massachusetts to Chicago, following a tour supporting Speedy Ortiz. Just the opportunity for him to wax lyrical on playing live, working hard, and of course, the Super Bowl Shuffle.

Read on below, and for further evidence of Nnamdi's far-reaching tastes, check out a playlist of his favorite tracks, compiled exclusively for us. Take a listen and try to keep up.

Tell us about your recent support slot for Speedy Ortiz. How do you prep for live dates and a tour run like this?
I just finished the Speedy Ortiz tour, which was a lot of fun. I practice as much as I can before every tour. There’s a lot of getting mentally prepared to be in a vehicle for hours. I usually like to either eat sushi or cook myself something nice the day before I leave for tour and when I get back. I don’t have many pre-tour rituals besides frantically rechecking my bags and hoping that I’m not forgetting anything crucial while I pack, then ultimately forgetting something somehow anyways.

What surprised you the most when you started playing live shows?
I think the energy that you can receive from crowds was a surprise. You can practice by yourself all you want, but once you are in a roomful of different people, with different personalities that all just had different types of days and you have to bring them together to focus and hopefully get them to enjoy whatever you’re doing??? WHAT? That’s a whole different task, and it’s weird as hell to think about. A positive crowd can boost the live show 1,000 percent and vice versa, but you still gotta go as hard as you can regardless of the vibe.

How would you describe your shows from the perspective of the stage?
It’s different for every show for me. I try not to pay too much attention to what’s going on in the crowd just because I personally tend to always find and focus on the person that looks like they aren’t having a good time, haha. A lot of times, what will happen is there will be a handful of people in the front that are grooving and really into it, then there are people in the middle that are into it but can't figure out why yet, and then people in the back that are confused or hate it. It’s tight.

Kudos on last year’s excellent DROOL. What were some things you learned during the making of that record?
Thanks! Throughout recording DROOL, I learned how to be more comfortable with my own voice being played back to me, which was a very difficult thing to overcome early on. I hate the way my voice sounds. It goes all over the place and depending on my mood/excitement, it’s hard to control but I’ve come to terms that this is just what I sound like. I don't mind it.

How do you plan to expand on or deviate from that record?
I honestly just make whatever I’m feeling. So hopefully people vibe with whatever the next release is like, even if it’s very different from DROOL, which is almost a guarantee. I always have concepts and ideas for projects, but I couldn’t tell you what the exact outcome will be right now because the music evolves as my ideas mature and also as I begin to listen back to what I’m working on.

What was the first instrument you ever picked up? And why was it important in your journey as a musician and songwriter?
Piano was my first instrument. I wish I stuck with it, but I got into drums shortly after piano and I was so infatuated with drums that piano instantly became a thing of the past. It definitely helped me learn some basic music theory though. I don’t know as much as I would like, but I am slowly getting back into piano this year.

How does your role as drummer in Monobody influence or inspire your own solo work, and vice versa?
I’m inspired by my bandmates in Monobody because they are all such good musicians and writers. Getting to work with them is truly one of the dopest things I could’ve asked for. They all work so hard too, so I’m constantly trying to keep up with them and it pushes me to do more.

As co-founder of Sooper Records, what are your hopes and dreams for the label? What are some challenges you face running a record label, and how do you overcome them?
Running an independent label is hard and if you are in it strictly for the monetary compensations, you have severely fucked up! I really just want to put out dope music I believe in and help my very talented friends and acquaintances get to that level where as many people hear their music as possible and they can create art comfortably at whatever level they desire.

What does rap mean to you?
This is a weird question! Everytime someone says rap to me, the first thing I think of is “The Super Bowl Shuffle.” I don't know what that says about me.

How would you define a “Big Break”?
Receiving a sponsorship from Sweet Baby Rays BBQ sauce and getting bottles for life or having Ellen Degeneres dance to one of my songs.