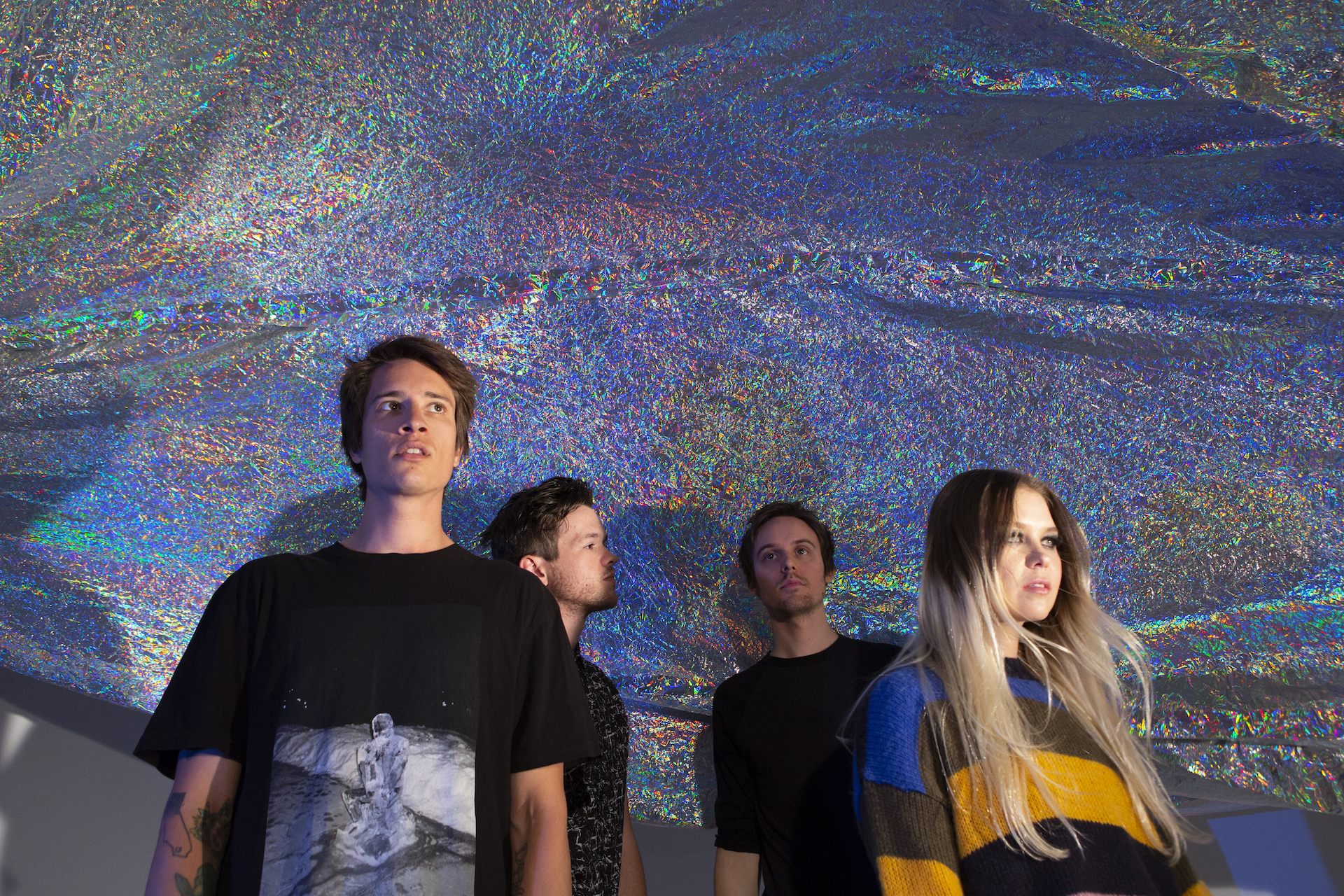 The name "Transviolet" is not meant to be overlooked. Transcending categorization, the alt-pop group combines elements from various genres to create something as beautiful and bold as the hue they're named after. "Violet is a mixture of blue and red, the yin and yang of the color world" they told us via email.

The four-piece—made up of Sarah McTaggart (vocals), Judah McCarthy (guitar), Jon Garcia (drums), and Mike Pan (guitar)—first rose to fame thanks to their groundbreaking single, “Girls Your Age”, off their self-titled debut, and we've become more and more obsessed with each subsequent release.

Not only will their contagious tracks and powerful messages have you hooked, but what really captivates listeners is Transviolet’s ability to fearlessly express themselves, both lyrically and on stage. If that’s not admirable, then we don’t know what is.

We got to chat with lead vocalist, McTaggart, who gushed about staying true to yourself, touring with LANY and Mikky Ekko, and how a recent Bowie binge led to their new single “Bad Intentions”. Stream the infectious new track below!

Make sure to track them on Bandsintown to stay updated on new releases, and catch them on their first ever US headlining tour, which wraps in LA on July 2!

So you’re almost halfway done with your tour— stand-out moments from these past couple of weeks?

It’s been really special to come back to these cities we’ve played as the opener and get to headline. Getting to open for Mikky Ekko and LANY was such an amazing opportunity, and it’s been cool to get to know our fans on our own tour now. Playing in these little rooms packed with people who’ve come to see us is really special and moving. It’s been a privilege to create these spaces where people are free to be themselves. I’ve had girls come up to me after the show and tell me that they felt empowered by watching me, like they’d been giving permission to feel confident and powerful in their own skin. That makes me really happy.

You’ve come a long way since the release of your huge hit “Girls Your Age”. How would you say you’ve grown as a band since then?

Our live show has come a long way. Mikepan created this insane, otherworldly light show that elevates and emotes our music in this transcendent, synesthetic way. We’ve all gotten a lot more comfortable on stage. I used to dread interacting with the audience, and moving around felt really forced and unnatural; I would avoid stage banter at all cost, just standing and singing. Now I find myself asking audience members about the cliterati and writhing around on the ground like a demon. I created an alter ego for the stage when we first started doing this, because I needed someone fearless and powerful to do these songs justice. She’s become such a big part of me now. She’s changed me. I’m so grateful to have the stage to explore these parts of myself I would have probably never discovered otherwise.

I think it’s awesome that you incorporate genres across the board. How would you describe your music to someone who hasn’t heard it before?

We’re somewhere between Sia, Borns, and Lana del Rey. We're a pop band, shamelessly, through and through, but we pull from all sorts of influences, from The Beatles, to Nirvana, to Radiohead to Destiny’s Child, to Yeah Yeah Yeahs, to Mura Masa, and Bon Iver. We never let our genre limit where we take a song. Also, I’ve never felt the need to dumb down the subject matter or poetry of our lyrics to fit the pop genre. Maybe that’s a mistake, but we’ve come this far, and now I’m just curious to see how weird we can make pop music.

If you could perform on stage with any artist, who would it be?

Any of the listed above, especially Lana or Beyonce.

I’m obsessed with the name “Transviolet.” Can you tell us a little about how that came about? How do you strive to emulate the meaning of “Transviolet”

We made up the word. It means transcendence into a new awareness. Violet is a mixture of blue and red, the yin and yang of the color world. The name was inspired by a Charles Bukowski poem “When The Violets Roar at The Sun.”

You always try to incorporate relevant social and political messages into your lyrics—advice would you give to other artists who want to do this but might be afraid to?

Do it. Being true to yourself, and to what you believe in is so empowering. Being the voice for those who can’t find the words, having the courage to speak your truth, feels right. There will be people who will discourage you from speaking out, but there will be so many more who are uplifted and encouraged by your honesty.

We can’t stop listening to your new single, “Bad Intentions.” Can you tell us a little bit about the inspiration behind it?

I’d been listening to a lot of Bowie, Blondie and Beegees (I just now realized those all start with B... weird), and wanted to challenge myself to write something fun and dance-y (I usually write sad/melancholy songs). We were in the studio with Nat Motte from 3OH!3, and I wrote these lyrics about being too f*#&$d up to care about all the creeps creepin'.

What would you say is the message you’re trying to put out to the world—whether that be as a band, or in your songs?

As a band, we want people to feel free to be themselves. We want to imagine a better world together: where we protect our mother earth, where love is never forbidden, where each individual is free to express themselves fully, where differences are celebrated, where we don’t let imaginary lines and the names of our gods divide us.

In my songs, the topic of female empowerment is unavoidable. I’m a female who is going to say and do whatever I feel like, and unfortunately there are still people who don’t like that. I’m lucky to be in a band with 3 men who are all feminists, who hold the space for me to start these conversations. Paraphrasing Madame Ghandi, I too believe that female pleasure is power. If we let society convince us that we don’t have agency and influence over own bodies and pleasure, then how can we convince ourselves that we have agency and influence over our society?

What's next for you after the tour?

We’ll get back in the studio and finish up some new songs. We’re releasing a new song July 13th, and looking to release an EP in the fall.