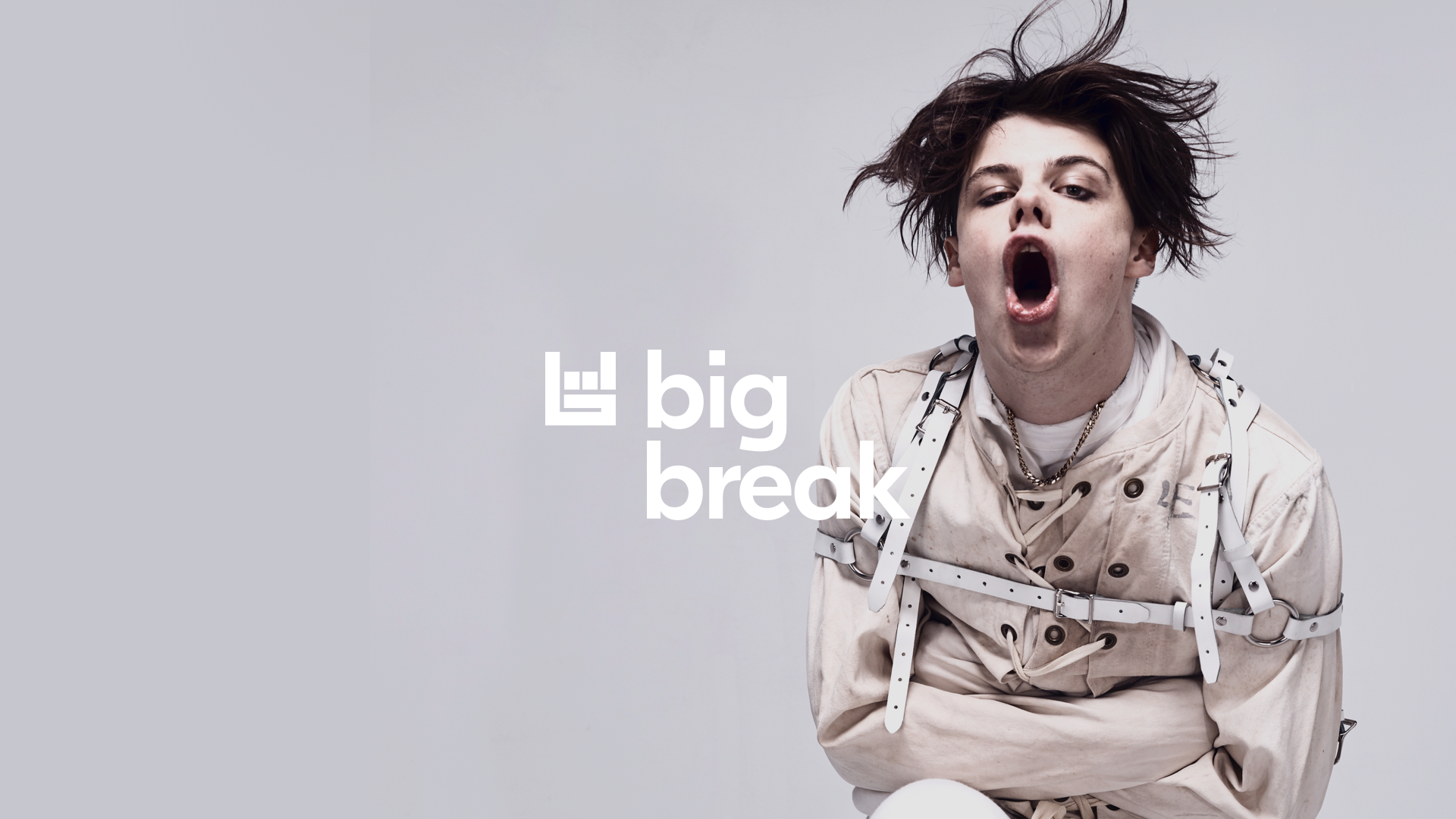 Young, mad, and raring to go, an 18-year-old Dominic Harrison hit the scene last year as Yungblud, bearing with a clutch of feverish singles so explosive with unbridled anger and energy that they’re impossible to ignore. No tender love songs, tracks like “King Charles,” “I Love You, Will You Marry Me,” and “Tin Pan Alley Boy” blend the raw edges of rock and heartbeat of hip-hop, boasting an acute social consciousness and a fresh rage against the powers that be.

There’s more where that came from—the Doncaster-born musician's debut record, 21st Century Liability, arrived on shelves last month, promising a long-playing wild ride and an youthful manifesto. As he wrote in a Facebook post, “This record is visualizing the liberal future of the world I want to live in.” Just take a gander at his manic video for the album’s first single, “Psychotic Kids,” which sees Yungblud playing up his unapologetic rejection of yesterday’s ideologies in a mental hospital.

And the youth are responding in kind. Need proof? Here’s an exclusive first look at the live video for “Anarchist,” filmed in London’s Dingwalls, featuring enthusiastic singalongs and everyone going ape shit.

Yungblud will be bringing his storm to a run of summer festivals, including the Vans Warped Tour, England’s Reading Festival, and Australia’s Splendour in the Grass, which will make perfect outlets for his raging restlessness. Before he released his LP, Yungblud got talking to us about what he’s packing, the triggering power of the kick drum, and what scares him (not much, really).

How excited are you about the release of 21st Century Liability?
I’m really excited. I think this is the moment it’s all been leading up to. This album is an outburst of kind of anger and emotion that’s been going through my head all of my life. It’s like a release—it kind of feels like I’m just letting it all out, which is amazing.

What was your favorite part of the writing and recording process?
I think learning a lot. Mixing different genres that I never thought I’d play personally—like, I always loved R&B, reggae, and hip hop—then mixing them into my own style of music was really eye-opening. really exciting for me to be able to talk about issues, what is going on in my head, and have the opportunity to use my music as an outlet.

What was it that drew you toward blending and mixing up genres like rock and hip hop? Why are these sounds significant for you?
I think firstly, hip hop and rock ‘n’ roll are intertwined. They’re almost like sister and brother. The two styles and genres are more than the music, they’re used to talk about real shit. And you know, I think a lot of music right now isn’t straight up—everyone’s so scared because they’re scared of the repercussions, but I wanted to mix all the genres that I love together, in one big mixing bowl and see what comes out. Every time I walk into the studio, I write what I’m inspired by. Why can’t I put a beat that I love from a Kanye West record, with a guitar that I love from a Clash record, and a string line that I love from a Verve record? Why can’t I do that? That’s not scary; that’s exciting to me.

How fun was it to get made up and perform in that stunning video for “Psychotic Kids”?
Oh, insane, man. I’m just so lucky that people let me run with my ideas. I said in that video that I wanted to have my brain out being operated on, because that song is about people being blinded by the cataracts of old ideologies. It was super fun to be able to express myself in that way, and just spend two-and-a-half hours getting a prosthetic brain put on—to just play a character. I always loved acting, and I’d love to in the future as well, but in my videos, I love playing these mad characters. It’s so exciting.

The album’s tracks tackle an array of political and social issues. Why is it important to you for your songs to have a social conscience?
I just think it’s what’s going through my head, you know what I mean? I just can’t believe politics has not been more relevant in the world. I can’t believe not many people are talking about it in music. I don’t want to preach to anyone. Everyone always says, “It’s a bit risky to sing about politics,” but no, I think it’s never been more relevant, especially for young people. We’re so tapped into it, so intelligent, so opinionated, but not in a way that we’re just angry teenagers rebelling against the establishment. We’re clued up and we have access to so much information. I’m angry right now. I think we’ve got our priorities wrong. I want my music to empower people who feel like they don’t have a voice, or feel like they can’t say what they think, to speak up because their voice is important.

We loved your 2017 single, “I Love You, Will You Marry Me”. What was it that drew you to the heartbreaking story behind that bit of graffiti on Sheffield’s Park Hill Bridge?
It was a hometown story that was just really relevant to me, and I loved being able relate it to the problems of the world. The whole song is about how corporate companies are taking advantage of something as precious as love. The story was always so interesting to me, and I couldn't believe that no one had written a song about it, so I wrote a song about it.

You’ve been writing songs since age 10. Could you share what those early compositions were like?
No, they were shite! (laughs)

What was it that helped you decide to actively and seriously pursue a musical career?
I think music was always a thing that made me happy and got stuck inside my brain. A lot of people misunderstood my energy when I was growing up, and misunderstood my opinionated personality. It was artists like Joe Strummer, Eminem, Alex Turner, and Busta Rhymes, who are so fundamentally themselves that I latched onto for support. So music kind of made sense to me. And when I’m on stage, man, it’s like the best feeling in the world. I can be fundamentally myself—I have the mic for an hour, and no one can tell me otherwise.

You’re about to begin a run of summer tour dates. What are some essentials you’ll be packing to go on the road?
Pink socks, underpants, sunglasses, digestives, Yorkshire tea, and Heinz beans. Yeah, Heinz beans are essential. Loads of butter, and loads of toast.

We’ve heard all about your explosive, energy-packed shows. What goes through your mind when you’re playing a gig? How do you keep up that level of energy?
It’s just my good old A.D.H.D, I think! I just love it, and I’m so lucky to be doing this. I don’t know where it comes from, but I don’t even want to try and think about it in case I work it out and it goes . As soon as that kick drum starts, and as soon as I hear the roar of the crowd, I’m just wired.

Post-gig, what’s the first thing you do once you step off a stage?
Take me top off, have a drink of water, and jump around like a mad man and say, “That was f&#*@! sick,” probably. Or cry, if it went badly.

Is there a musician whose career path you most admire and would like to emulate?
I think David Bowie is a big person for me, because he always reincarnated and you could never quite put your finger on him as an artist. I mean he evolved and evolved and evolved and evolved. So I don’t want my next record to sound like my last record, and I’m just excited to do things that are outside of the box and people go, “Oh my god. Yungblud did that, but fuck yeah.”

What would you love for your fans and listeners to take away from your music?
I want this album and my music at the minute to be an outlet for people who feel like they can’t be heard. Who feel like they can’t say what they think. And just to feel empowered, but to have a really f&#*@! good time listening to it as well.

How would you define a “Big Break”?
It’s an opportunity that you’ve got to grab while you’re hot in the moment. Having thousands or hundreds of people singing your music, undeniably, that’s amazing. Or if you’re trying to be funny, a Kit-Kat junkie.