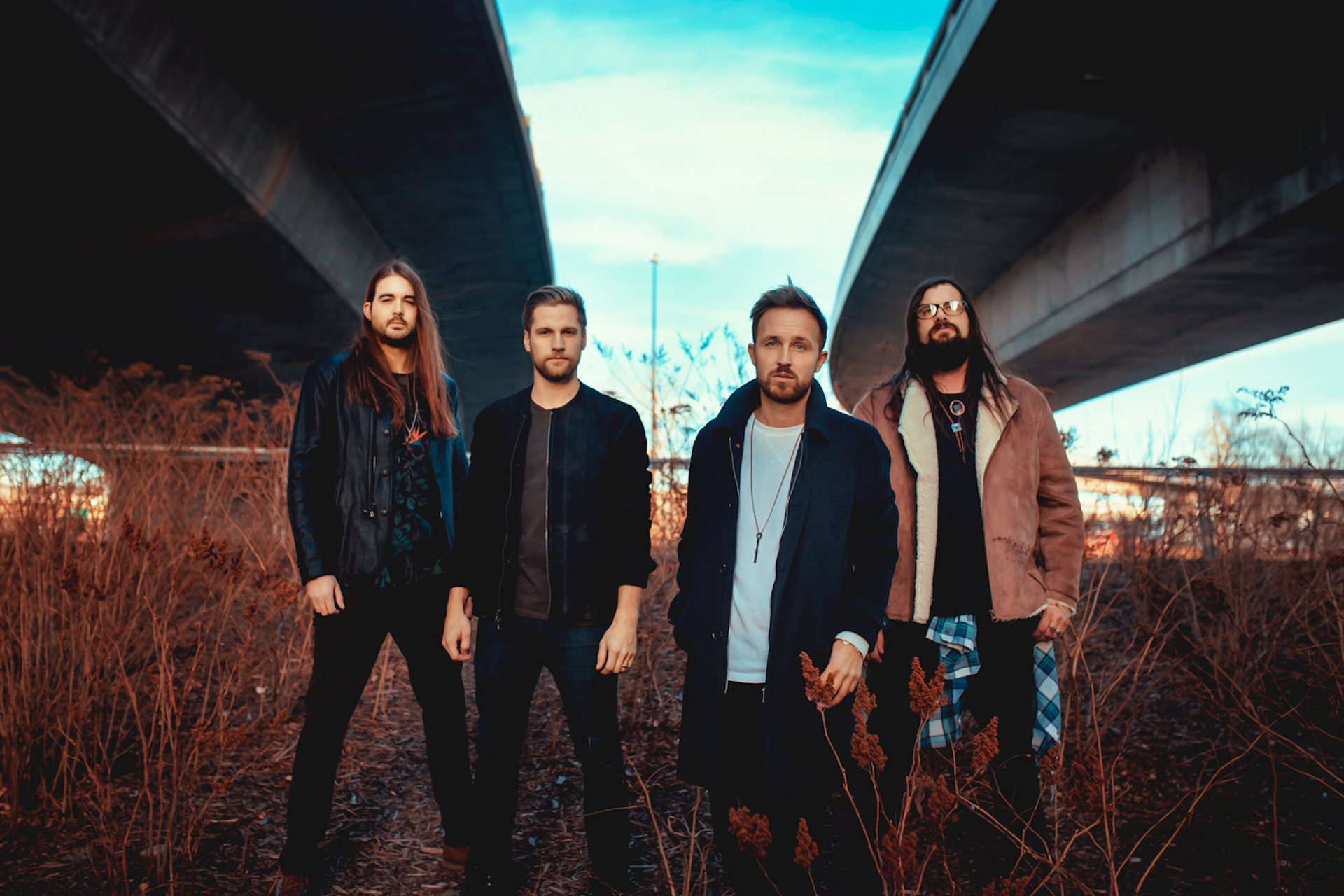 Royal Tusk is a group of rock'n'roll connoisseurs that have a knack for storytelling. These Canadians channel the classic blazing guitar riffs of yesteryear, without compromising their signature, powerful messages. The four piece from Alberta also has a raw energy that allows them to create music that will make you want to air-guitar right alongside them.

Coming back with a powerful swing, their latest LP, Tusk II, is even louder and contains more powerful hooks than their previous album (which we weren't sure was possible). The powerhouse track, “Aftermath”, is a tailor-made anthem for our generation that has become “desensitized to ultra-violence,” said vocalist Daniel Carrier. One of the opening lines, “I should be losing sleep, but losing isn’t enough because there’s not a tragedy so bad it keeps me up,” hits us in the feels—bringing to light something we're all too aware of on a day-to-day basis.

To dig deeper into Royal Tusk’s sound and inspiration, we got the chance to ask Sandy, the band's bassist, more about their new release and the visuals for “Aftermath”. So stick around, track ‘em, and catch them on their upcoming American tour!

Coming off the Canada tour with your label-mate, Pop Evil, what was your favorite city to perform in and why?

I don’t wanna sound like it’s a run of the mill answer, but it’s way too tough to pin down a favourite. There were places we’ve played many times before, and like clockwork delivered in good vibes and wild energy. Quebec City really shocked me, they went berserk in a small little club that was totally oversold. But, I will say, we haven’t played our hometown of Edmonton in a long time, so there was something to prove on stage that night. I can’t say really though, just a really good banger from city to city, everyone in the crowd really brought it.

What was your favorite memory from the tour?

I can safely say this, and I imagine pretty much every touring musician will agree that you must be out of your damn head to tour across Canada in the middle of winter. We must have hit every major snowstorm in the country on this tour. So you spend the day white knuckling it all the way to town, you load in the freezing weather, finally relax a bit, slam a few beers and then hit the stage. That’s where my favourite memory is, the second you get on stage after a super stressful day. You lock in and see everyone in front of you really start diggin it. That’s the greatest feeling out there, seeing a crowd really love what you do. Makes a shitty day completely worth it. I was lucky, I got to do that every night!

What songs or albums were kept on repeat when traveling?

You know it’s drivers choice, and everyone in the band has got such different tastes. We all love everything, from death metal to country music. There is always a time and place. Take for instance, we start a drive at say 7:30 am, everyone is kind of in and out of sleeping cause it was a late night. For this case, It's my turn to drive, as much as I live for driving everyone nuts, I’ll probably refrain from blasting the new High on Fire record that early in the morning, and probably keep it nice a chill. Maybe some Johnny Cash.

What has been your favorite fan interaction from the tour?

Maybe it was the dude who stood beside me at the Casino in Regina and drunkenly barfed his guts out into the garbage can. *laughs* Seriously though, we have some amazing fans considering we are a new (ish) band. People writing us saying what our music means to them and how it has helped them through tough times with lost loved ones, or broken relationships, etc., that can really floor you!

Loving Tusk II! What did the band look to as a source of inspiration this time around?

We really just wanted to make a big rock record. I grew up loving that screaming guitar and big riffs from bands like Nirvana, Soundgarden, Black Sabbath, to newer ones like Mastodon, Clutch etc. It was an easy transition.

Which song off of Tusk II would you say holds the most meaning to your band?

They all have a specific message, whether it’s dealing with the current social climate, or talkin about standing up for yourself. But personally, I have a spot for “Northern Town”. It’s a song that really talks about where we are from.

From watching some of the videos from the tour, it seemed like every concert had a lot of energy. What was your favorite song to perform off the new album?

I love playing “Freedom”. It’s a such a heavy groove with a lot of melody, that you really can’t help but bang your head.

What was your initial reaction once hearing "Aftermath" had accumulated over a million streams on Spotify?

Absolutely humbled by the amount of love that everyone has been showing, I’m still speechless thinking bout it. Like seriously, a million people have listened, that’s totally fucking nuts!

The music video for "Aftermath" also carried a lot of weight, what was the purpose in showing the disaster clips sprinkled throughout the video?

It’s the idea of how much we are subjected to the craziness of the world we live in. It’s happening, all the time, everywhere, whether you like it or not. For some people it’s so much so often, they become desensitized to it.

What does the creative process of sitting down and writing a song look for you guys?

There isn’t really a go to process when it comes to writing. But it does start with either a slamming guitar riff, or maybe a lyric idea that we wanna write around. It can take a lot of banging your head against the wall sometimes, but other times everything can come so organically. Doesn’t mean one is better then the other, it’s just different. There are songs that have been one person leading the charge, and others where we flush it out as a group.

In comparison to some songs off your debut album, Tusk II took a deeper dive into your a heavy guitar style. What has it been like trying to find you sound as a band that is growing in popularity?

We didn’t set out to start writing heavier, it just went that way. Like I said earlier, we love heavy music, so going that direction was a very organic transition. It felt natural to start laying angry lyrics over thick guitar lines and heavy ass grooves. When the record was completed, there was a bit of a “why didn’t we start doing this sooner!” Vibe. All I can say is that it just feels right.

When looking for inspiration, who are some current artists that your band is influenced by?

So many different tastes and so much music that we listen to, it’s hard to pinpoint. I can say we listened to a lot of early 90’s grunge music, like Nirvana and Soundgarden and Pearl Jam to get a bit of the rawness. Maybe some early 70’s rock like Led Zeppelin or Sabbath for massive guitar licks. Or how about some Mastodon and Gojira or Meshuggah for some of that heaviness. So many bands play into our influences.

After a successful Canada tour, where does your band hope to go on tour next?

We got our sights set for the USA. Maybe spend some time in the desert, or on the coast, by the beach. Just get me the hell out of this winter bullshit.

With a growing fanbase, Royal Tusk has a lot in store for the future. What is up next for the band?

We actually, as of today just announced an American tour. Sirius XM station, Octane, has put together a tour, and we just happen to be one of the lucky bands on it. It’s gonna be a blast! Gonna be a lot of touring this year, so stay tuned! Love everyone who has been showing us support, from the bottom of my heart, thank you!