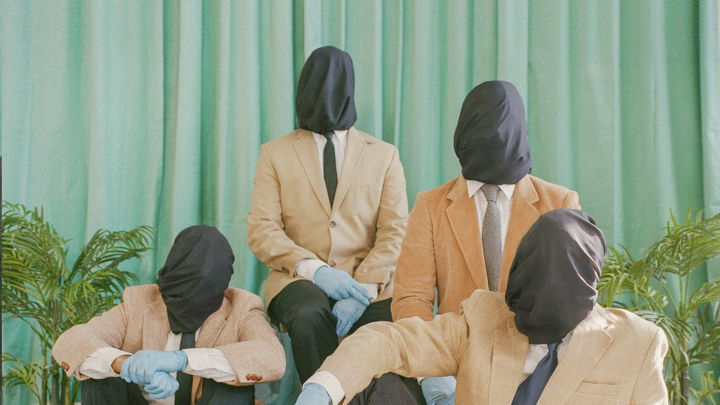 With their Watchmen-esque headwear and custom tailored suits, Blood Cultures can't help but inspire intrigue when the step on stage. Since the release of their 2017 debut album, Happy Birthday, their dreamy vocals and bubbly synths have had us hooked, regardless of our knowledge of the men behind the masks. Now, the New Jersey team is back with new music, expanding on their psych pop sound with the 12 new tracks that make up their sophomore album, Oh Certainty! A Universe Despairs.

With the rising beat of a drum, their track “Broadcasting” opens to a groovy juxtaposition between two genres: Bollywood and psych-pop. Similarly, the music video, which premiered on November 19, featured someone feeling torn between two cultures. The lyrics echo the emotional crossroads, “You'll tell everyone you've ever known of, where you've been and where you're trying to go, but there's no telling what you're on about, when all you've ever been is full of doubt.”

To prepare for their headlining tour (which kicked off the 15th in LA), Blood Cultures shared with us their tour bus playlist. And from the looks of it, the gang will be making good use of their shared Netflix account on the road. Listen along as their make their way across the US, and make sure to catch them when they play in your city!

Massive inspiration in terms of the style and composition, specifically the grandpa vampire.

The vocal production on this track was so innovative - safe to say it changed everything about music.

Listening to this song is an emotional journey, really touching honestly. I cried the first time I heard it (and also every time I hear it).

I straight up shit my pants the first time I heard this one - why did they have to make it so darn spooky!

Be sure to wait for the bass drop here.

"This is the theme song"… Meta songwriting at it's finest.

When I was born, I'm pretty sure this was playing in the background. It makes me nostalgic for my infancy - now those were the days!

This song slaps almost as hard as the bass slaps in the song itself. I hope they play it at my funeral.