ChartsNewsReviewsFeaturesLists
Bandsintown Big Break: Get Loud With Liily, Rock’s Newest Disruptors
+ turn things up with an exclusive playlist of the band’s punk and rock faves.
Guide
Track on Bandsintown
Share on facebook
Share on twitter 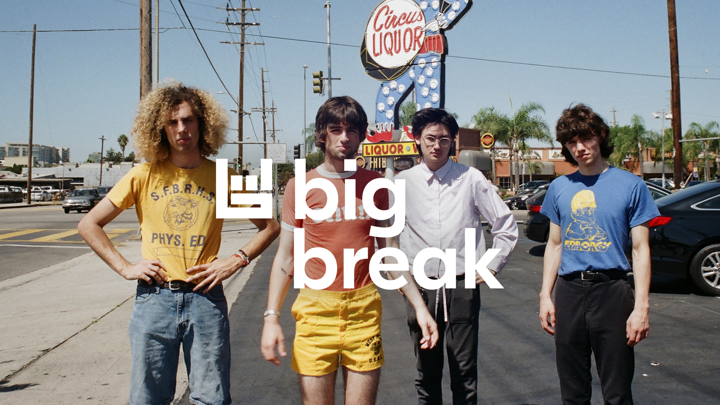 Rock has a new wild child: Liily, a band that’s pulling no punches when it comes to riffs, rage, and general racket-making. Witness their first single “Toro,” which rips up and resets the punk template with a savage thrash of guitars, menacing rhythms, and howl-filled verses. With its restless cacophony, it pretty much dares you to keep up with its breathtaking pace.

That same ferocity is all over Liily’s debut EP, I Can Fool Anybody In This Town, which was released in early 2019 and consists of similarly brisk cuts. For more, there’s their newly pressed “Wash,” another rock-heavy assault. And yes, the band has a live rep to match: their kinetic performances have fueled mosh pits across America and Europe. Through all their travels though, the four-piece retains a special love for their native Los Angeles where its members—frontman Dylan Nash, guitarist Sam De La Torre, bassist Charlie Anastasis, and drummer Maxx Morando—were born and bred. To see what we mean check out the concept behind Brekfest, an annual festival launched and nurtured by the band, which spotlights their LA peers and offers a forcefield of live music experiences.

You know what else is relentless? The group’s taste in music. Just for us, they’ve assembled a playlist of tracks and touchstones that get them ready to hit the stage. Like any Liily creation, enjoy this at maximum volume. And stick around on the other side for our confab with De La Torre on life as a band, in the studio, and on the tour bus.

What was it that brought you all together?

We got together by circumstance, in a way. Two of us were friends, and one of us knew the other guy and so on. We grew up in relatively the same scene in Los Angeles that started in the valley and/or in the city. All of us had been playing music in some way prior to making the band in 2015.

Congrats on your debut EP, I Can Fool Anybody In This Town. Its energy is downright contagious. What lessons did you learn from writing and making this record?

We now know that bodies of our work are representing a specific era of what we all listen to at the time. We don’t listen to any of the same music we were listening to while writing the EP, so anything that we put out next will be representing where we currently are in our lives. People tend to think that follow-up records could stray too far from a band’s “early work.” We encourage straying.

And how do you feel now that the EP’s released to the world? What do you hope listeners will take away from it?

We hope the EP is a sufficient enough amount of music to keep listeners occupied, but also be the EP that seems like a trailer for something bigger and listeners are still in need for more.

Also, kudos to you, Sam, for the amazing video for “Wash.” What was the big idea behind it? And what was the process of making it?

Much appreciated! The video idea came out just the same as the song idea: very naturally. We wrote that song in less than a day and the idea was, for the most part, put together overnight. A lot of the idea came from obsessing over a combination of DIY stop motion tutorials and professional stop motion how-to's. There will be plenty more videos to come.

Why is playing live important to the band?

What unusual things, if any, are you packing for the band’s upcoming tour dates?

What new things about each other has being on tour taught you?

At some point, we all designated seats in the van that we’re all in agreement about. Somewhere down the line, everybody figured out where they like to sit and if we don’t get to sit in our unanimously known seats, we’re not too happy about it.

Tell us more about Brekfest and the band’s role in it. Why is this event important to you and to the city of LA?

We started Brekfest in 2018 at a warehouse we (family) own, and it was just an event we wanted to reoccur for us every year. It’s all LA bands for the most part (or have an LA demographic), and it’s all bands we like or are friends with. It’s a night for the artists and less for the reputations.

How big a part does Los Angeles play in the band and its music?

We all grew up here so it plays a bigger part than any of us realize day to day. As far as we know, LA influences us in things to talk about, places to explore. It also influences our live performances and has a recognition in that, perhaps.

What is Liily most looking forward to in 2020?

A full-length album and another Brekfest. Hopefully.