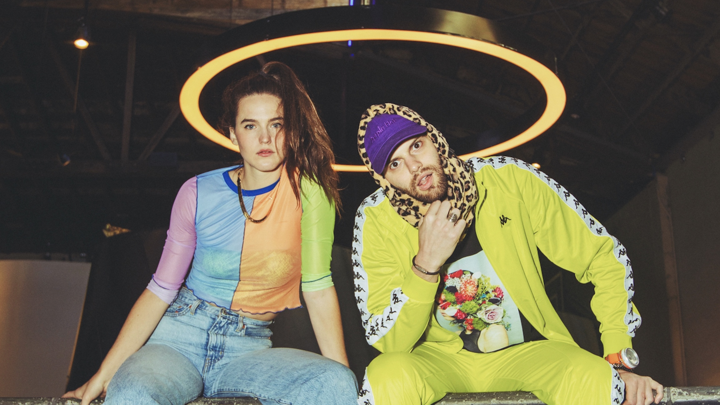 New York based dance group SOFI TUKKER absolutely killed it at their homecoming show at Avant Gardner in Brooklyn on October 24th. The Grammy-nominated duo, comprised of Sophie Hawley-Weld and Tucker Halpern, have the inherent ability to get work a crowd, getting them amped up no matter how big or small the venue. Filmed during their hometown show, the live video for their latest single “Purple Hat” perfectly illustrates what it's like to be in the room during one of their concerts. From fans decked out in their best SOFI TUKKER-inspired looks (lots of neon and glitter involved here) to the group dance shots, this will give you major FOMO.

The band, who wanted an authentic approach to the visuals, said, “We didn't want to get actors and have a fake party to recreate the energy -- we wanted to do it in real life with real people, like we do most nights of the year.”

Before they head off to Europe, the band shared their tour bus playlist which features songs by artists like Latriot, KiNK, and a remix of their own track by Novak! Check out the video and playlist below and don’t forget to follow SOFI TUKKER on Bandsintown!

This is just a dope house track we’ve been listening to before most shows.

Tucker originally got inspired to make music because of this song so it was a dream when we got the opportunity to do a remix for it. It just came out and it always goes off in the club.

Icona Pop & Afrojack - “We got that cool”

We have recently gotten to know the icona pop women and we love them so much. What a cherry on top that we are also huge fans of their music. We’ve been playing around in the studio together.

We listen to this every day before we go on stage. Novak is one of our all time favorite producers. This remix is FIRE and we have a song together coming out soon.

Piano house can make any day better, so we tend to hit that pretty hard before shows. Simple and hot.

Teyana Taylor - “We Got Love”

This is a total heater, reminds us of old Kanye and we love that.

Peggy You - “It Makes Me Forget”

We have been listening to this when we are stretching and doing yoga before show.

Can’t believe we were so late to the game on Hot Chip. Our sound engineer has been blasting them in the venues before sound check.

Keep going back to this song because it has a really catchy, sexy vocal and a great driving beat.