ChartsNewsReviewsFeaturesLists
Bandsintown Big Break: With Aidan Gallagher, Your Heartstrings Are in Good Hands
+ an exclusive link to pre-order his latest single, “I Love You".
Big Break
Track on Bandsintown
Share on facebook
Share on twitter 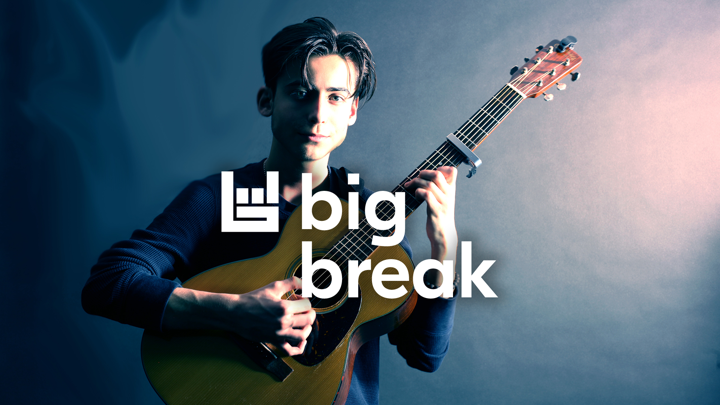 You may recognize Aidan Gallagher as space and time-traveling Number Five on Netflix’s The Umbrella Academy, but don’t sleep on the guy’s musical chops. Armed with a knack for warm and emotive melodies, he’s already unleashed a clutch of songs since 2017 that have earned him critical kudos, fans, and a spanking new spot on last month’s Bandsintown Emerging Artists chart. But that’s no big surprise. In between the lush “For You,” the spectral “Blue Neon,” and the soaring “Time,” Gallagher’s got versatile, romantic soundscapes to spare, each bound to win over the hardest of hearts.

A writer to his core, it should come as no surprise that he's also mastered the art of the anti-love ballads. Slated to drop at the end of the month, his newest track “I Love You” is a tender one that sees Aidan tackle the profound weight and complexities of falling for someone. “Be careful where you use the words ‘I love you,’” he sings with a force beyond his 15 years. And we won’t have to wait long for it. We can exclusively announce that pre-orders for the track start on January 24th at this link.

Excited for it? We are! So much so that we got in touch with Aidan—fresh off an exquisite show at the Troubadour in LA—to find out how he’s getting primed for his Big Break. Keep reading for a peek into his songwriting process, his studio, his trailer, and of course, his undying love for My Chemical Romance.

Hello Aidan! 2020 is here—what are your wildest hopes for this year?

Well, first, I’m hoping the world is going to start making some positive changes to fight climate change. Also, I’m really excited about touring and producing more music this year now that I have the producing skills and tools in place.

Your recent Troubadour show was such a fantastic showcase. What do you love most about performing live?

Performing live is so much fun—interacting with the audience and having this experience with them in real time. It’s an emotional thing and I like that I can make people feel happy. I just want to hit the road and tour for as long as I can and then take breaks when I have new songs to record.

What runs through your mind when you take the stage, when you’re playing a show, and when you step off stage?

When I first come on stage, it’s a rush, seeing the audience’s faces and knowing they are listening so closely. And then when I start singing, I kind of get into the zone of each song. It’s so much fun for me that I hate it when the set is over!

What was a live show you’ve witnessed that was inspiring to you?

I just went to see My Chemical Romance play their reunion show at the Shrine. That was a complete rush—so emotional, so moving—and it was inspiring to see how polished they and in sync they are. They really know how to interact with their fans. But not only that, each of the band members is such a great musician and performer. So to get to that stage one day would be my goal.

Fill us in about your upcoming single, “I Love You”—how did the song come about? What was a highlight in making and crafting it?

“I Love You” is really an anti-love song. It’s definitely written from the heart and my own experiences. You fall in love and it’s so pure, and then the love morphs and your feelings morph. It’s complicated. But I think, ultimately, I’m not saying don’t fall in love; I’m saying be cautious about using the words “I Love You” because those are powerful words that can change another person’s life forever. It might feel good in the moment but it’s going to mean years of regret down the road.

Tell us about the first song you ever wrote. What sparked it?

I’ve been writing songs since I was nine and what seemed cool then, I’m embarrassed about now. So I hope I keep getting better. I’m working on the craft of songwriting all the time.

What does songwriting mean to you? What do you hope your songs tell us about you as an artist or a person?

Songwriting is a creative thing that you do for yourself because you sort of have to get it out. It’s like a painting or building or crafting something and working on how to make it better. I hope people listen to my music and enjoy it, and that it sparks or resonates within them. It usually starts with emotion and what I’m dealing with and then, like therapy, I just pour it all out in music. It might take me months but eventually, I am left in a good place mentally.

We hear your first EP is currently in the works. How are you approaching this record and what can we expect from it?

Well, I’m not rushing the process and I think, ultimately, it will be a better product. It’s been something I’ve been planning for a long time and it’s morphed as I’ve grown. I initially had some plans that have changed a lot since I first announced it.

What’s your studio environment or work space like? Do you need to have certain things/items/vibes in place before you get down to music-making?

These days, you can make music in a lot of places and ways. I’m most comfortable in my own studio space at home. I have certain equipment I prefer and I’m also sampling cool noises that I run across when I’m out and about. I like to have a bunch of stuff to work with to layer and build behind my lyrics and melodies. I record mostly in my garage, which is sound-proofed, and work out songs in my bedroom, which is more homely and a safe space to hang out.

And of course, kudos on your starring role in The Umbrella Academy! How has your work as an actor inspired or shaped your work as a musician?

For me, acting and music are very different disciplines. But when I can, in the rare instances I might have time on set, it is fun to have a guitar in my trailer to play with. The Umbrella Academy IS a very cool music-driven show with a kind of soundtrack to the characters’ lives. That’s credit to our producing team and their great taste. The comic the show is based on was written by Gerard Way of MCR, so there’s that influence as well on the show and definitely on the character I play. I’m a huge MCR fan, so it was pretty cool I got the role. Acting is fun, but music is my passion.

Name a musician or an actor whose career you’d most like to follow in the footsteps of.

Anyone who follows me knows my hero is John Mayer. He’s just an amazing musician and creative force in every single way. I also admire Ed Sheeran, Charlie Puth, and many others. I aspire to be the best musician I can, developing my own style, but I think it’s clear that I’m very inspired by these guys. Finneas is pretty cool too.

To you, what counts as a “Big Break”?

You know, I’m just so grateful for all the opportunities that have come my way. I just keep working on my music in every spare moment and if I get a “Big Break” in my music career, that would be awesome. I think social media can help any musician create their own big break, but it’s definitely hard work, no doubt about it. The big break will be some big hit like “Ocean Eyes” [by Billie Eilish] that just goes viral and leads to be stadium shows. That’s my dream.