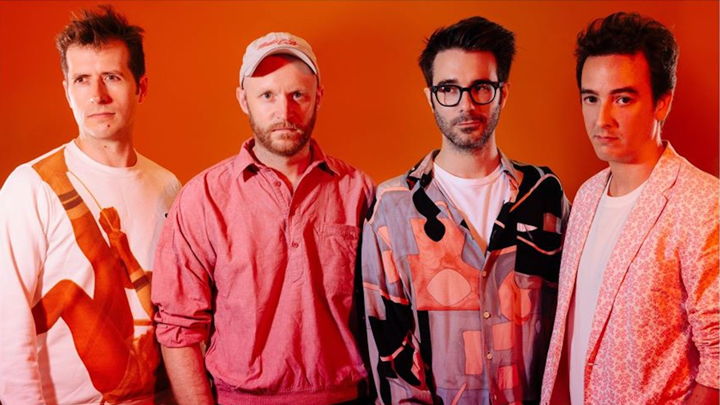 If Sunday Funday could be experienced in song form, it would be PREP’s groovy numbers. The UK-based quartet specializes in a beautiful fusion of R&B, funk, and jazz — making their music the perfect addition to any lazy day hang.

The band attributes their fresh sound to the fact that each member comes from a different corner of the music world. Vocalist Tom Havelock is an accomplished pop songwriter, keyboardist Llywelyn Ap Myrddin composes classical music scores, drummer Guillaume Jambel is a former house DJ, and hip hop producer Dan Radclyffe brings the R&B touches to PREP’s music. This combination of funky, slow tempoed songs were first highlighted with singles “Sunburnt Through The Glass” (2015) and “Cheapest Flight” (2016).

Their releases are emotional, fresh, and experimental as evidenced by tracks like 2016’s “Who’s Got You Singing Again” which showcased Havelock’s smooth vocals and impressive range. Thankfully, they’re back with new music, including “Love Breaks Down” and “Over” which also features Norwegian pop singer Anna of the North.

2020 is proving to be a big year for PREP. Not only is the band’s full length debut set to arrive, but they also just finished up their second US tour. With a spring tour on the horizon, the four-piece shared their most played city pop songs with us. A subgenre of pop from Japan which incorporates various styles like rock, R&B, and funk, it’s easy to see why the tracks move them. “It’s sampling heaven,” Guillaume says of one of his picks, while Dan describes another as a “slow groove with the smoothest of chords.”

Check out these city pop tunes below and don’t forget to track PREP on Bandsintown!

Mariya Takeuchi is Tatsuro Yamashita's wife and this collaboration is justifiably well known, having become a surprise hit thanks to the YouTube algorithm. Instantly recognizable groove, classic melody, and so many great arrangement details. This song always makes me feel nostalgic for an 80s Japan that probably existed more in fantasy than reality. (Llywelyn)

Ok I know this is miles from city pop but I couldn't resist putting in this classic track from the YMO. As soon as that intro hits this track grabs you, Ryuchi Sakomoto is like a modern-day renaissance man. (Llywelyn)

A big part of my love for this is about the cover — this totally artificial space, neon blue light, a glimpse of a plastic cactus through a weird diagonal doorway, and then she's sitting there in this phenomenal grey suit, looking very human but very hard to read. The lyrics are a mystery to me, but I think there are lines in there about lonely nights, solo driving, and the comedown after you've been laughing too much. All over a slick shuffled groove. And then at the end of it all, a guitar turns up and blazes all over the fadeout. (Tom)

Has to be one of the perkiest riffs of all time. It's turned up on at least one other record of the last few years, and I don't know if the purists would file it under city pop, although it veers into those kind of chords for the B-section, right after the vocoder and wolf whistles. It's so hard to make good music that sounds this happy, but Penguin Dancer, there you go. (Tom)

This is the best track from Tatsuro san’s album Melodies. The production is very clean and the arranging spot on, and I love the moodyness of the the chord progression: it reminds me of 90s French filtered house records. (Guillaume)

This is such a banger. The guitarist (Hiroshi Narumi I think?) totally kills it. And this groove is amazing, so slow and yet so in the pocket. It took me a long time to find a decent copy but I finally got it last summer at Ella Records. (Guillaume)

This sounds halfway between late 70s film soundtrack and vintage Weather Report. You must wait 2m of windy synth work before it all kicks in, but when that clav arrives, it’s sampling heaven. A beautiful track, so good and well put together. (Guillaume)

5-minutes of blissful quasi-balearic vibes, this is surely the mellowest track in city pop. The vocoder combined with the chords is almost close to ELO. The Beatles were clearly an influence on Sato, as the album this song is from has a (very danceable) cover of 'From Me to You'. (Dan)

I picked this up from Ella Records last time we were in Tokyo. Sunshower is a top-five city pop classic, featuring all the great musicians and arrangers. This track is my favourite, Latin-influenced and based around a folky harmonised flute riff. With the vocal in Japanese it's such a charming mix. (Dan)

I'll be honest I don't know much about Anri other than her having loads of albums, but I gather that the one this track is from, 'Heaven Beach', is the one to get. This is the highlight: a water-tight slow groove with the smoothest of chords. (Dan)