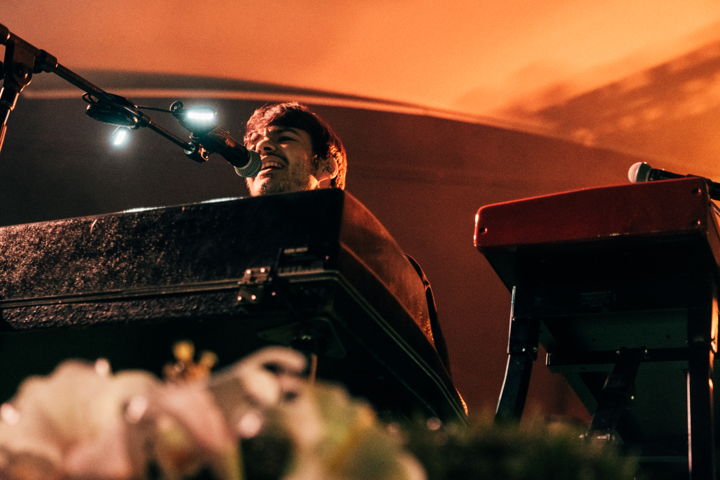 The first time I listened to a Rex Orange County song was in the passenger seat of my friend’s Ford Escape. “Loving is Easy” had recently come out, and it served as a beacon of hope in the impending winter months. It was the kind of track whose optimism and wholesomeness made you want to live in it. After seeing the UK native’s headlining show at Radio City Music Hall earlier this month, I can say the same is true about his live performance and stage presence.

The show opened with Rex (real name Alexander O’Connor) walking out in a full suit and tie, ready to perform. The five-piece band accompanying him were also dressed to the nines, as if they especially wanted to impress the crowd at one of New York’s most iconic venues. As for the stage design? You couldn’t help but be mesmerized as soon as it was lit up; the ground was covered in flowery grass, and above hung large white clouds. The initial lighting was warm and pink, and altered throughout the show to mirror day, dusk, and night. All of the cues were perfectly programmed to the music and were done with a precision that maximized the rawness of Rex’s performance.

“10/10”, “Laser Lights”, and “Face to Face”, all songs off of the new album Pony, were performed before the stage turned a dark violet. The introduction of “My name is Rex Orange County, and I love New York City so much, I can’t even tell you,” was met with a warm excitement that matched the transformation from violet to orange, not unlike night to dawn. He then sang “Never Enough” and “Television / So Far So Good”, both off of his previous album, Apricot Princess. All of the songs he performed up to this point were ones that got the crowd out of their seats and were sung with passion as well as clarity.

One of the songs of the night that stood out to me was the single, “Pluto Projector”. As the chorus began, the audience flooded the house with phone lights to the point that you would have thought someone switched the overheads on. The line “I don’t think I’m meant to understand myself” hit me like a truck; it seemed that everyone in the theatre could relate to this feeling of desolation and heartbreak, and belted it back to the performer that it came from. As the song came to a close, a neutral backdrop flew in from above to cover the band, leaving Rex alone with just a few instruments.

“Maybe I should sing this song tonight at this show, and only this show. Just as we are where we are.” The next thing heard among the excited shrieks were the opening notes to Billy Joel’s “New York State of Mind”. In addition to the smooth vocals that brought this version to life, Rex was able to demonstrate his range of musical talent; his piano playing abilities amplified his already wonderful performance.

Another standout part of the night was the addition of the trumpet and saxophone players. They particularly stood out in “Sunflower”, one of Rex Orange County’s most recognizable songs, when an unexpected horn duet broke out. Both of the players were incredibly talented, and made the already upbeat song that much more energetic.

It was hard to keep a smile off my face during the entire concert, and it seemed that both Rex and the audience held a similar sentiment. I also took in the reactions of those around me: the couple in the row behind me who seemingly just came from their wedding; the shuffling group of guys ahead of me who were all clearly trying to impress the same girl; the two friends swaying and singing “Pluto Projector” to one another. Holding his hands on his chest, Rex Orange County radiated appreciation and sheer bliss as the audience gushed affection during “Loving is Easy”. The warmth in the room was palpable and is what sums up Rex Orange County to me.