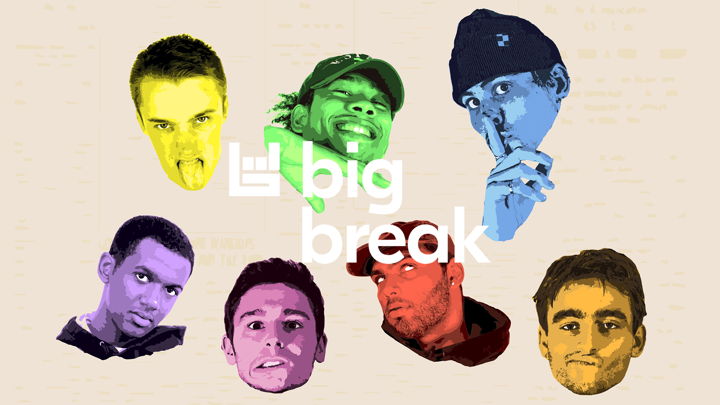 99 Neighbors weren’t idly named. Built on friendship and powered by solidarity, the hip hop collective consists of a fluid lineup of vocalists, producers, and visual artists—with the core trio of rappers and songwriters Sam Paulino, HANKNATIVE, and producer Somba—that’s defying the limits of a musical group. Collaboration is the game here; and according to them, a singer could make beats as much as a beat-maker could produce a music video. This dynamic assemblage of talents has birthed a soundscape equally restless and experimental, dotted with nods to rock, soul, and jazz, and never without a killer hook.

The above number sits on 99 Neighbors’ gem of a debut album, Television, which dropped early last year. On it, the group’s promise rings crisp and clear (from the staccato uplift of “Champion” to the post trap groove of “Bangarang”) in ways you can’t ignore. Befitting the collective’s camaraderie, these tracks were hatched in Somba’s bedroom, in the house they shared in their hometown of Burlington, Vermont. Television is way bigger than that room (just ask Reddit), but their team spirit is the biggest of all.

Since then, 99 Neighbors has been seen on stages, on everybody’s playlists, and unlikely enough, in the small town of Island Pond, VT, where they’ve been working on their followup to Television. Their lips are sealed as to what that might sound or look like, but they’ve offered us an exclusive taste of the tracks they’re listening to for inspiration in the meantime. Hit it below for their rollicking selection, then meet us on the other side for a conversation with the band on the brink of their Big Break before they head off on their upcoming US dates in Boston, LA, Chicago, and DC.

99 Neighbors team, where are you right now and what’ve you been up to the past month?

After a hectic summer and fall, we’re now living in Chicago and working on our next project.

A strong sense of unity obviously runs through the group’s ethos. What’s the secret sauce in your friendship and collaborative relationship?

It all comes naturally to us. We focus mainly on communication, humility, and being friends first. Having a group slowly come together out of a pre-existing friend group laid the foundation for us to already know how to treat each other and work together.

Why do you think Burlington proved to be such a fertile creative ground for the collective?

Burlington doesn’t have a huge local hip hop scene, so it forced us to find inspiration outside the area. When we came together, we all brought with us a range of influences, creating this new sound in the area. Nobody was doing what we were doing, so we had the freedom to set a standard for what the local scene could be.

You recently moved to Chicago—how has that transition been for the group?

It’s been a totally different lifestyle; making music has changed from being an escape from everyday life to being our full-time jobs. It’s also really nice for us to be in a big city, especially one where a lot of our favorite artists come from.

Props on Television—it’s downright ingenious in its blend of styles and textures. Tell us about the atmosphere in Somba’s bedroom during the making of the record. Was it as fun to make as it is to listen to?

Television was a product of a lot of long hours; it was our first time making a project together, which can be really hard with this sized group. Television was our proof of concept where we could prove that this group could work together and create a cohesive piece of work. For months we would meet up at Somba’s after our jobs or college classes and work until 5 or 6am. We’d then go to sleep before going back to work or school and then start all over again for about three months.

How did you feel about the reception to the album? You guys caused a deluge on Reddit!

The positive reception was insane. We made the project solely for us and had no expectations around what the album would do for us. The Reddit thing was hilarious. When we first posted the album, it was taken down because the feedback was so unanimously positive that they thought we were using bots. A few months after the project, we were being approached by some of the biggest labels and agencies in music, which was way more than we could have ever hoped for from this project. It was all so surreal.

What do you hope listeners take away from Television?

Listeners should know that it’s only the beginning of our work. We were figuring shit out and made sure to not take ourselves too seriously.

What is the experience of performing live with 99 Neighbors? What’s the view from the stage like?

It’s changed a ton this year. Last year, we were playing in dive bars for four people and now we’re able to regularly play on festival stages next to artists we grew up listening to. The festivals are awesome, but we’re really excited for our first time on a headline tour. There’s something really special about performing in a packed room of people who really know and care about the music you make.

What are some essential tracks on your tour bus playlist? Who is normally DJing on the road?

The taller members of our team get first dibs on shotgun, so they usually get control of the aux. Some tracks we can’t stop listening to are “Unemployed” by Tierra Whack, “In My Room” by Frank Ocean, “NEW MAGIC WAND” by Tyler, the Creator, and whatever Mick Jenkins puts out.

How did you choose Island Pond as the location for the making of your followup to Television? What’s a day like in your Island Pond headquarters?

We were looking to take some time outside of our hometown of Burlington, VT and we had some connections in the Island Pond area that provided some places to stay. It was the first opportunity for the whole team to live together. There was a huge culture shock and we definitely stuck out there. Having rappers and producers living in a rural town of 800 was pretty funny.

The creative potential in 99 Neighbors—with its array of individuals and talents—is infinite. What are your wildest hopes and ambitions for the group?

A Big Break for us would be for us to be able to work with artists that we love and admire.