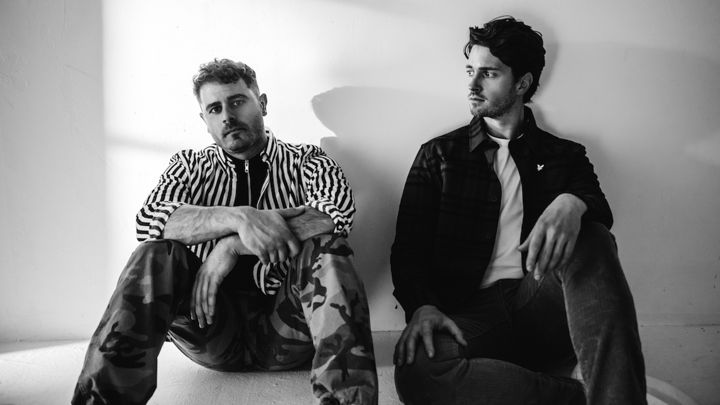 The musical duo, made up of Tarek Jafar and Justin Tessier, pull influences from a slew of genres to give their alternative sound an extra edge. Taking notes from classic rock, rap, and blues, The Ontario-based group have become known for their powerful vocals backed by heavy guitar and addictive percussion.

After the success of their first album Black Holes in 2018, they recently began working with Paul Meany, producer of Twenty One Pilots’ album Trench. Since the LP dropped, they've dazzled us with two new tracks, “Grim” and “Shakin’ Off the Rust”, which will both be on the new album coming out later this year.

The Blue Stones ended the American leg of their tour at the end of February, so we wanted to ask them what they were listening to on the road. Track them on Bandsintown to see when they’ll be playing a show near you!

Badass chorus riff that amps us up to hit the stage heavy.

Have love for Gambino's wit and delivery (also Göransson's production). Try to channel it when appropriate.

Love the DGAF attitude this song emits. Good for getting into the rockstar mentality.

A finesse track that is also channeled for the live stage.

Always have to pay homage to the original influences of your music to remind you why you're there in the first place.

"The Hype" – Twenty One Pilots
Track

Self explanatory lol. But really it is a great hype song. Can't be in a bad mood listening to this one.

"Conversation" – Catfish and The Bottlemen
Track

Great new rock for a couple of new rockers.

There's just so much swag and style in this song that's worth your attention.

One of the newer finds that is very energizing. Great hook here.

Talking about badass riffs, there's one for the ages. Can't not get amped up after listening to that.

We have a lot of foals on our pre show, and there's a pretty good reason for that.

"You Don't Get Me High Anymore" – Phantogram
Track

They're consistent with the beats and hooks. Motivates us to want to make good music both live and recorded.