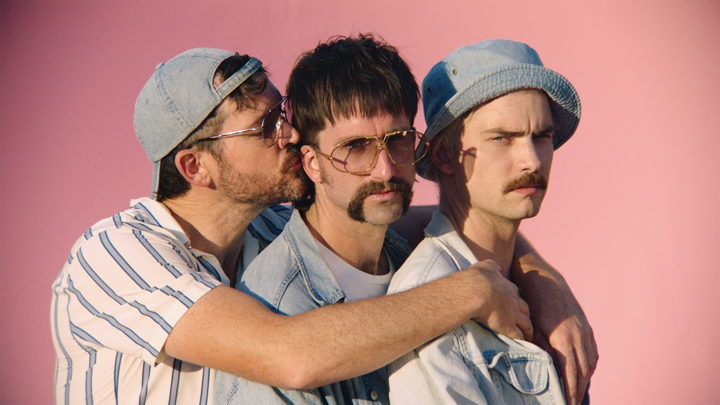 From the throws of the Los Angeles quarantine, Sandy Hawkins emerged from Echo Park as neighbors Tiger, Tom, and Keenan bonded to form the world’s next obsession-worthy boy band. Fueled by ‘80s classics and hangovers, all three members blend their distinct influences to create cheeky tracks that remind us what a daisy dukes-filled summer feels like.

Since their debut single release in June, Sandy Hawkins has gained over 16k monthly listeners on Spotify, which invariably earned them placement on their curated “Fresh Finds” playlist. Their Synth-pop meets psychedelic hip-hop sound make them a trio of endless day-time drinking bliss.

Today, Sandy Hawkins is releasing the video for "Cherry Chapstick," directed by Black Coffee (Josh Rimmey and Zach Williams) which will be featured on their upcoming debut album. Decked out in Nascar memorabilia and pastels, singing about a “hot pair of sheets, straight out of the dryer” this video makes you scream, “I want to be friends with these guys!”

Check out the video below!