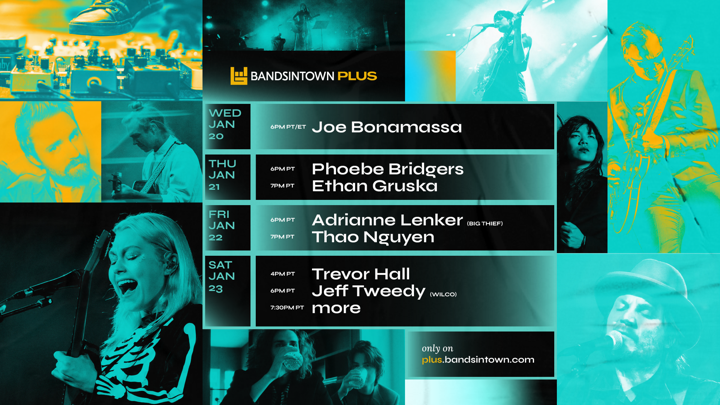 We're gearing up for week two on Bandsintown PLUS, our recently launched live music streaming service subscription service. In case you missed it, for less than $10/month, fans get an all-access pass to 25+ exclusive live shows PLUS interviews, original series, and intimate Q+As. Last week saw intimate performances from everyone from Mexico City's Rodrigo y Gabriela to Nashville-based singer-songwriter, Soccer Mommy. Check out some of the highlights below!

Starting Wednesday, January 20th, fans will be able to tune in for performances from the likes of Phoebe Bridgers, Joe Bonamassa, Adrianne Lenker (Big Thief), Jeff Tweedy (Wilco), more, Ethan Gruska, Thao Nguyen, and a special album walkthrough with Trevor Hall for his latest LP, In and Through the Body.

Check out the full schedule below, and be sure to sign up for Bandsintown PLUS now by visiting plus.bandsintown.com.

This modern blues legend performs an exclusive show with his band from Nashville’s legendary Bluebird Cafe plus an extensive interview. Can't make the first show at 6:00 PM EST? Check out a rerun three hours later at 9:00 PM EST!

A Los Angeles-based singer/songwriter with a dreamy and hook-filled indie pop heart, Phoebe Bridgers' witty lyrical perspectives, sadly beautiful songs, and commanding melodies quickly jettisoned her to worldwide acclaim. Nominated for Best New Artist at the 2021 Grammy Awards, the Pasadena-native will be giving fans an intimate set live from LA.

Ethan Gruska first stepped into the spotlight in the rock duo The Belle Brigade alongside his drummer sister, Barbara, releasing two albums to much acclaim. Since then, he has grown as a composer and a producer on lauded records by Phoebe Bridgers and Bad Books. Catch him for a set live from LA, where he'll be performing songs from his catalog including 2020's En Garde.

Thao Nguyen of Thao & The Get Down Stay Down

Lead musician of the band Thao & the Get Down Stay Down, Nguyen is a powerhouse singer, songwriter, and multi-instrumentalist. Crafting delicate but memorable songs tinged with country and blues, the indie-folk frontwoman's rich voice and thoughtful lyrics has drawn comparisons to everyone from Fiona Apple to Cat Power.

Raised on an island in South Carolina, singer/songwriter Trevor Hall realized at a young age that music was more than just a passion - it was his life’s art. IN AND THROUGH THE BODY, Hall’s latest record, released September 25th, 2020, presents his most mature sound yet, touching on the timeless human themes of love, struggle, growth and redemption. Hall uses a palette of genres that span from folk, roots-rock, indie, and electronic, all with a consistent wash of authentic far-Eastern influence. Join the "my own" songwriter as he walks through the creative process of his latest album.

Wilco leader Jeff Tweedy will perform live from Chicago with the full Tweedy band and do a rare live fan Q&A.

more is a new duo comprised of Los Angeles-based songwriters, vocalists, and multi-instrumentalists Kane Ritchotte and Malcolm McRae. The preternaturally talented and synchronized pair paints the modern rock and roll canvas with a powerful, melodic guitar sound mixed with wry intelligence and a tinge of psychedelic flair. Catch the two-piece live, be performing live from their studio in Los Angeles.