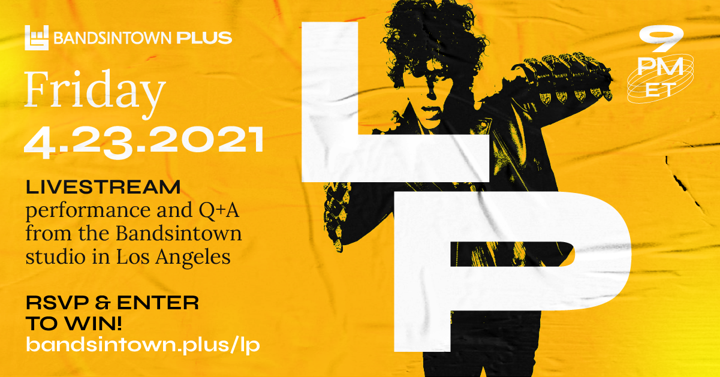 Bandsintown PLUS, a first-of-its-kind subscription service delivering exclusive live streaming experiences to everyone, everywhere, announced today that they will now add pay-per-view and replays of select shows beginning with a special replay of an extremely rare live performance by The Microphones’ Phil Elverum on Thursday, April 22 at 9pm ET / 6pm PT. The replay will be followed by an all-new live Q+A with Elverum with an encore broadcast of the entire show and Q+A at 11pm ET / 8pm PT. The unique performance first debuted live on the platform on Saturday, March 27 and featured Elverum playing live in the middle of the forest on his hometown island off the coast of Washington. Elverum was accompanied by Jay Blackinton on guitar, and the entire set was a one hour long song called “The Microphones 2020” performed for the first time ever. Fans can RSVP to this special replay event HERE.

In addition to The Microphones replay, fans of indie pop band Lucius will have the option to buy a single show ticket alongside monthly subscribers to Bandsintown PLUS for their exclusive live stream concert and Q+A on May 20 at 9pm ET / 6pm PT. More artists offering fans the choice of subscription or pay-per-view viewings of their exclusive live streams on Bandsintown PLUS will be announced soon.

“We want to be able to provide fans with various options so they can enjoy more of the one-of-a-kind shows we’re producing on the Bandsintown PLUS stage. Stay tuned as we will continue to roll out new offerings and exciting features in the coming months,” says Fabrice Sergent, Managing Partner of Bandsintown.

Next week’s Bandsintown PLUS lineup also includes Low Island performing from The Church Studios in London on Wednesday, April 21 at 9pm ET / 6pm ET. This show comes days after the release of their highly anticipated debut album If You Could Have It All Again which the band will further support with a headlining UK tour in September.

On Friday, April 23 at 9pm ET / 6pm PT, PLUS subscribers will have access to an exclusive set by singer-songwriter LP followed by a fan Q+A live from Los Angeles. LP, who rocketed to international fame with 2017’s “Lost On You,” which hit No. 1 in 18 countries and has since surpassed one billion streams, will perform a set of her hits, including “Lost On You,” “Girls Go Wild,” “Muddy Waters,” and more, plus three songs from her as-yet-unannounced next album. Among those will be her latest single, “One Last Time,” which was released last month with an accompanying video co-starring Jaime King (see here), plus “How Low Can You Go” and “The One That You Love.”

Since its debut in January 2021, Bandsintown PLUS has produced memorable shows and fan Q&As led by guest hosts like Talkhouse Podcast host and producer Elia Einhorn. Highlights include Phoebe Bridgers performing a live acoustic set with Ethan Gruska; Jeff Tweedy performing with his two children followed by a rare Q&A; Chromeo performing a special set of fan requests from their Burbank studio followed by Ian Isiah singing a live rendition of AUNTIE, the album produced by Chromeo; Adrianne Lenker of Big Thief’s first solo livestream where she performed while her grandmother painted alongside her; Empress Of performing after Chrome Sparks from the studio that he visually converted into a stylish flower nursery; a green-screen performance by Claud featuring original illustrations; Arlo Parks’ lucsious performance on the heels of her critically acclaimed album; Cole Preston, Braeden Lemasters and Dylan Minnette of Wallows who debuted their recent EP “Remote” and drew in over 18,000 chat messages within their 1-hour show and Q&A; and an explosive live show with Omar Apollo, a Bandsintown 2018 Big Break artist who has since signed with Warner Records and released his debut album Apolonio to critical acclaim in 2020.