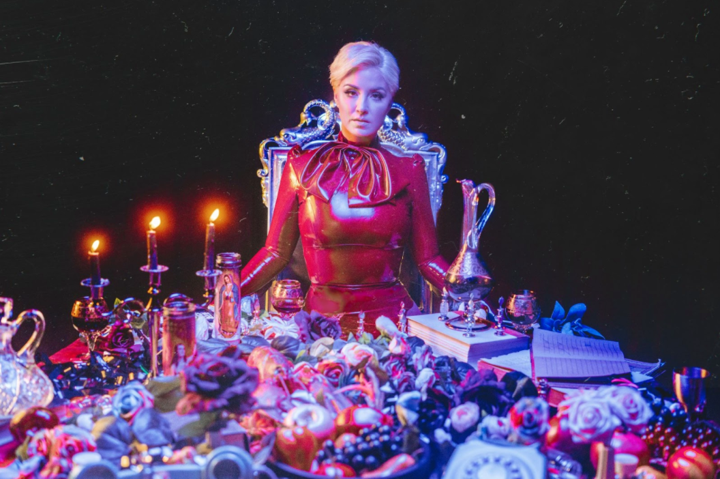 This ongoing series will include both rising stars and established veterans and offer an inside look at the most recent developments in their careers. Each profile will feature an interview with the artist along with up-to-date contact information.

If you represent an artist who you think would be a good fit to be featured in an upcoming “Six Questions With,” contact us at hypebot@skylineonline.com.

“With things changing by the minute, every show we get to play is my favorite,” shares Maggie Rose. She’s just launched an extensive tour in support of her new album “Have A Seat” recorded at the legendary Fame Studio in Muscle Shoals and released this Friday August 20th.

Q: Recording for your new album “Have A Seat” (8/20 on Starstruck) began pre-pandemic at the legendary Fame Studio in Muscle Shoals, Alabama. I believe the sessions included some amazing musicians and how was it working there?

Maggie Rose: It was an incredible experience working in such an iconic room with that stellar band, and I thought about all the artists who had gone before me – Aretha, Otis, The Allman Brothers, Percy Sledge, Wilson Picket – making the records me in that very space that have inspired me and that made me up my game. I was very aware of the sanctity of that room and the camaraderie between the band was palpable. I’ll always chase that feeling you get when you’re laying down music with other people and the magic is happening.

There was no cloud of paranoia from COVID yet and we were sharing microphones and steaming up the room from hours of tracking and swapping ideas. I believe in my heart that those days aren’t over, but I’m certainly yearning for their return right now and it makes this whole record that much more precious to me.

Ben Tanner of Alabama Shakes produced this record and played on it, too. He listened to countless songs with me before we went in to track with an amazing crew; Larry Florman and Alex Haddad of Them Vibes, Sarah Tomek on drums, the original Muscle Shoals swamper David Hood and Zac Cockrell of Alabama Shakes on bass, Will MacFarlane also on guitar, Lloyd Buchanan and Ben Alleman on keys, Karita Law and Shanay Johnson on background vocals, Caleb Elliot, Eleanor Denig and Laura Epling on strings and Jake Bots, Charles Ray and Glenn Hill of Them Horns as the brass section. It was an event to say the least.

Q: Since the songs on the album were primarily written pre-lockdown, how do you think they hold up in the current political, social, and even emotional climate?

Maggie Rose: The meaning behind or attached to a song always evolves for me from the day it is written, and I love the way these songs have seasoned throughout the events we have all collectively witnessed. These songs were written during a very politically contentious time and then we were put in a pressure cooker and that contention worsened. So, themes of inclusivity, tolerance, hope, compassion and celebrating one’s individuality felt even more relevant after 2020. I also think the correlation of giving these songs away in tandem with the opportunity to perform them live and gather back together makes it all feel more triumphant. I initially wrote them to soothe myself in a way and now it feels like they can do that for the audience.

Q: You started doing live shows again in July. What did it feel to be back on stage?

Maggie Rose: At first, I felt anxiety when everything seemed to suddenly open back up. We had 60 shows booked in a matter of days and I was asking myself “do I remember how to do this? What will the crowds be like?” Then the first show happened and it was like riding a bike – perhaps down a steep and bumpy hill, but nonetheless – and the gratitude was so immense that all of that self-doubt and worry melted away. I will never take getting to do what I do for granted. I was so starved for the connection that comes from music and I will never squander that away. However, I also believe we need to protect the touring industry at all costs and trust the science to make sure that we don’t go down again. I have friends in the industry who had to close their doors permanently, some have given up music altogether and even worse, some gave up on it all.

Q: You’re heading out on an extensive tour. Tell us about it and are there any gigs that you’re particularly looking forward to?

Maggie Rose: At this rate with things changing by the minute, every show we get to play is my favorite. As I type this, we’re setting up the stage in a tiny 100-person cap room and I am thrilled to be here! But, Summer Camp is going to be a trip; I’m playing with Big Something, Andy Frasco and Moe. in addition to my own set. Looking forward to Bonnaroo for sure. The album release show in Nashville at Brooklyn Bowl will be stellar.

Q: When you’re on the road do you have any routines, habits, and “must-have” items in the dressing room?

Maggie Rose: We are one big happy family on the road and we like to gather together before we hit the stage and huddle up to get our heads right. There is usually a shot of tequila involved and then we’re off. We try to make the most of our travels and really see the cities we’re in. We’ll hit the park and go running and try to find good local spots to eat and drink.

Having Kombucha on the rider is helpful. Get those probiotics in…

Maggie Rose: During my time at Clemson, I was in an a cappella group called “Take Note.” I might kick your ass in golf and tennis, and I can make a mean Chicken Parm.