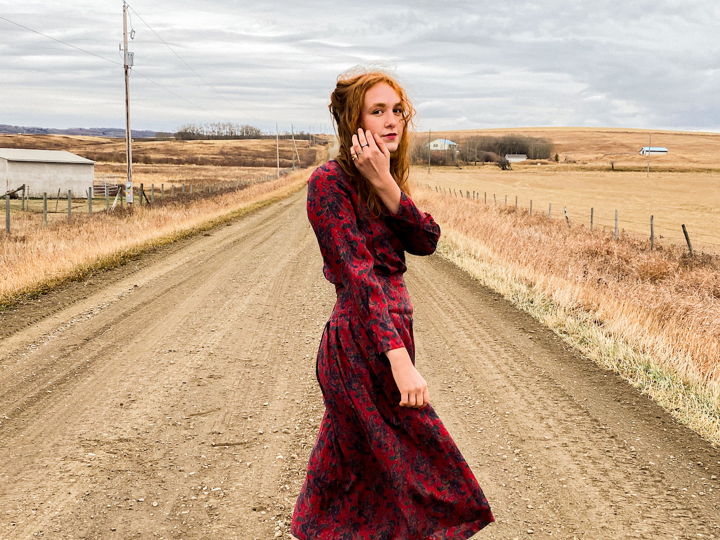 You released your debut album on Rounder in May. How was it to write and record during the pandemic?

Yes I did! We actually recorded the album right as the pandemic began to get really bad. We were in the studio the second week of March 2020. When we first arrived the pandemic was definitely still an idea, or rather it felt that way to us—but we quickly realized the scale. As we recorded at Guilford Sound in the woods of Vermont, we were already pretty isolated and removed from the rest of the world, so we continued to do the session.

It was very surreal to be in our little bubble and to enter a whole different reality when we left the session. because it’s my debut album I wrote most of the songs prior to the pandemic happening! I’ve been writing a lot over the course of the pandemic now, and it’s interesting to note that I feel like now, most of t my current music is shaped slightly by a different worldview.

You chose the musicians on this album after jamming with each of them at various music festivals. Tell us about those jams and why you used this method to pick your players.

Each of those moments was really special. I’d say the most memorable was the first jam I had with my mandolin player Reed Stutz. It got me really stoked on the idea of having him in my band. It was at a festival called Fiddle Tunes in Port Townsend, Washington and we stayed up until four in the morning or later singing old gospel songs and a bunch of others off the album, Skaggs and Rice. Singing and playing with Reed always feels effortless, and that is a special thing. The jams I had with the others were all similarly special in their own way. I wouldn’t even say that picking musicians this way is much of a method, rather, it feels so good to play with these people that I can’t help but ask them to join my band!

Tell us about your first “post-pandemic” live show. What did it feel like to be back on stage?

My first port-pandemic live show was at Tellus 360 in Lancaster PA. It was so special. A bunch of new fans came out and filled the room. It was so energizing and encouraging to play for people who love the music and have supported me throughout these times. It felt very comfortable and empowering!

You’re out on tour this fall doing a mix of headline shows and co-bills with Sierra Ferrell and others. Does each kind of show feel different as a performer? Do you adjust your show?

I guess they feel different in a way. When I’m opening for someone I try to play a more mellow set and really get the audience engaged so that when the headliner comes out they are in full-on listening mode. When I’m headlining I guess I often feel a little more confident going into it, maybe because I know the audience is there to see me. I might come across as more open and spunky on stage in those cases. I would say that the show remains pretty similar though.

I always run when I’m on the road. I try to get out every other day. That keeps my brain calm with so much time spent sitting in the car. I think my only green room must-have is tea to relax with before a show.