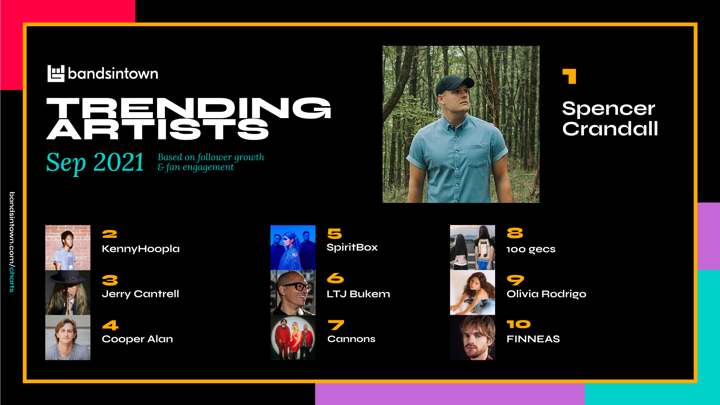 Our Emerging Artists chart rounds up the artists on Bandsintown who are making the biggest moves, based on follower growth and fan engagement.

Read on for more info about the top ten trending acts worldwide on Bandsintown below, and be sure to check out the rest of our charts here!

Nashville-based country singer Spencer Crandall is about to hop on the road for his own headlining tour, along with a few shows opening for Kidd G. The “My Person” crooner recently released his new single “Made,” and has surpassed 2 million followers on TikTok.

KennyHoopla is currently on Machine Gun Kelly’s Tickets to My Downfall Tour, which includes dates at Red Rocks Amphitheater and Mohegan Sun Arena. The Travis Barker collaborator will headline numerous shows in October and November, including a gig at The Roxy in Los Angeles. He will embark on his own tour next year, taking him through the UK and North America.

Jerry Cantrell will release his third solo album Brighten on October 29. He will perform the album, and other Alice in Chains classics, across the United States beginning in March 2022. The guitarist and vocalist will start his run in St. Paul before finishing in San Diego.

TikTok’s “Mashup King” Cooper Alan is gearing up to perform in October and November. The country singer will take the stage at Winston Salem Fairgrounds in North Carolina before treating his fans to a free show at Opry Plaza in Nashville. Alan unveiled his newest single “Let Her Talk” on September 10.

Fresh off the release of their album Eternal Blue, metal group SpiritBox are taking their show to the sea. Starting on October 26, the band will perform on the S.S. Neverender with Coheed and Cambria. After that, they will take part in Welcome to Rockville Festival on Daytona Beach, before setting off on their North American tour with Underoath and Every Time I Die early next year.

LTJ Bukem will be hitting clubs and theaters across the UK starting in October. The London-based DJ and producer just released his new song “Flip the Narrative,” and he will surely be spinning it on his upcoming tour.

LA alt-pop trio Cannons are preparing to hit the road with lovelytheband and Sir Sly. Fans can see them in cities across the United States including New York and Portland. Before kicking off the tour, they will spend Halloween at Outside Lands in San Francisco.

100 gecs, known for their high-pitched hyperpop sounds, will begin their North American tour in Oakland on Friday, October 8. These will be the duo’s first shows after they were forced to cancel their 2020 tour due to the COVID-19 pandemic. The “money machine” singers also teased a new album and movie titled 10000 gecs.

Though she has not announced a full tour, audiences are eager to see Olivia Rodrigo live. The 18-year-old recently performed her first ever concert at iHeartRadio Music Festival in Las Vegas, where she performed all her hits including “good 4 u” and “drivers license.” Her upcoming performance at ACL Live at Moody Theatre on October 2 will be filmed for ACL TV.

FINNEAS will release his debut album Optimist on October 15. Largely known for his work with sister Billie Eilish, the singer-songwriter-producer is stepping into the spotlight on his North American headlining tour. The “I Lost a Friend” singer will be joined by marinelli.