ChartsNewsReviewsFeaturesLists
Big Break: Let Jensen McRae’s Folk Pop Sounds Take You on a Journey
+ check out her playlist of songs that inspired her latest EP!
Big Break
Track on Bandsintown
Share on facebook
Share on twitter 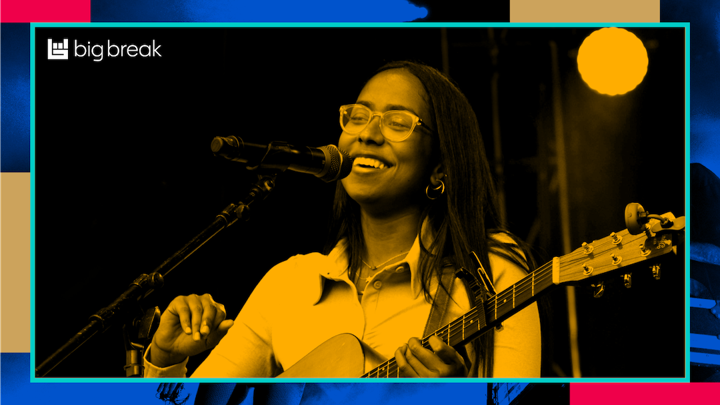 You know those rare, magical artists whose music you hear the first time and it stops you in your tracks? Their voices are inviting, drawing you into every lyric. It doesn’t matter what story they’re sharing, or what stage they’re standing on, you will fall deeper every time you smash “play” on a new track. Jensen McRae is one of those artists. Her tone is chill-inducing, with the depth of Tracy Chapman and the grit of Julien Baker. McRae’s songs call you in, like a good book you can’t put down. When you hear her, you will be enthralled.

Born and raised in Los Angeles, McRae describes herself as a “wordgirl.” She is a storyteller by nature; a writer of songs, poetry, fiction, and personal journal entries. She emerged onto the scene in 2019 with her single “White Boy,” a true story about being ignored as a bi-racial woman. The Grammy Camp and USC alum speaks openly about her own encounters with racism, mental illness, and love. “I can’t lose you yet/I refuse to let you go/Loving you is in my bones,” McRae sings. By using her voice, she aims to create a safe space where her listeners can feel comfortable being themselves.

McRae released her debut EP Who Hurt You? in June. The project features “White Boy,” “Wolves,” and the Phoebe-Bridgers-inspired-tweet-turned-song “Immune.” She is currently working on more music, preparing for a string of shows with Amos Lee next April, and counting down the minutes till the 2022 festival season. McRae was cool enough to make us a playlist filled with songs that inspired her new EP, and we think you’ll love it. Listen to it below, check out our interview with her, and track her on Bandsintown to know when she’s in your city!

Your EP, Who Hurt You? came out this summer! How did you come up with the title and how does it describe the project as a whole?

I came up with the title Who Hurt You? while reflecting on the intersection of comedy and tragedy that defines the way my peers and I express ourselves. We meme everything, including mental illness. And I think whenever an artist releases sad music their fans will wryly ask who hurt them. I feel like the songs on this EP explore all the different answers to that question, the ways I’ve been hurt by mental illness and rape culture and unrequited love and racism, and ultimately how the root of a lot of my pain is self-sabotage.

In a Q&A, you call yourself a “YouTube kid.” How do you think growing up online shaped your approach to your music career?

I think growing up online gave me both a lot of the tools I need to succeed but also gave me some unrealistic expectations about how a career in music really works long-term. We live in an age of instant gratification, and so when I was younger I expected that if I was going to succeed, it was going to happen really quickly. What I’ve learned is that the best careers are built slowly, one brick at a time, with a lot of care and focus by everyone involved in making it happen. And that’s ultimately a great thing, because I don’t have any interest in being extremely famous, and I certainly don’t want any level of fame to arrive at me overnight. I really value how slow and deliberate my journey has been thus far, with the exception of “Immune,” which was a rapid acceleration that I found quite terrifying.

Speaking of the Internet, many people know you from your viral Phoebe Bridgers tweet that led to your song “Immune.” What have you learned from that experience?

Going viral taught me that it’s really good to be prepared for anything. When I wrote those verses that night in January, I had two singles in the pipeline, one coming out that weekend and another coming out a month later, plus a lot of other finished music waiting for release dates. I also knew, at a subconscious level, that I would be capable of finishing that song quickly and proficiently, if I needed to. I never predicted that the tweet would go viral or that the song would perform so well once it was released, but I was ready for it from a craft perspective. I wasn’t scrambling to create music for people when their interest was piqued; I was already ready.

In addition to songwriting, you’re also a poet. How does writing poems differ from writing songs? Are the two worlds connected?

Writing poems and writing songs definitely have a lot of overlap. Usually both start with the seed of a single line that comes to me out of nowhere, and then when I have the time to sit with it, I follow the impulse to see what comes after it. Deciding whether it’ll be a poem or a song is often just about honoring the spark, and not forcing it if one medium isn’t working. But the easiest way to tell the difference is that my poetry is usually far less musical and rhythmic than my songwriting; my poems rarely rhyme and they’re almost always free verse, so if the line that comes to me feels particularly rhythmic, it’s almost always going to end up in a song.

What do you hope people will take away from listening to your music?

I hope people listening to my music take away that feeling big feelings is okay, and it’s more important to sit with pain than to try to move on from it as quickly as possible. I know as well as anyone else that it’s counterproductive and toxic to wallow, but I also know too many people who are so averse to feeling sad or lonely or disappointed in themselves that they try to numb the pain or push it down, and ultimately that just ends up poisoning you for longer. So I think my approach, to feel the big feeling right away to express (or over-express) it thoroughly is healthy in the long term.

How has growing up in Los Angeles impacted you/your career? Do you think things would be different if you were raised elsewhere?

Growing up in Los Angeles made it so that even though I’ve had to deal with a lot of change and growing pains in my music career, I’ve been able to do it with a full support system—my whole family lives in the city—and without having to adapt to a new environment. Even though I didn’t grow up in an industry family, I grew up knowing that there were millions of other talented people in the same place as me, all trying to do exactly what I’m doing. So I think I was aware of what I was up against in a way that people who move from small towns maybe don’t realize until they arrive. I think if I was raised elsewhere I might not have gone for it in the same way. I always joke that the alternate universe version of me is a creative writing teacher at a prep school who’s writing a novel on the side.

What was it like playing The Greek with Rufus Wainwright and Aimee Mann? As an LA native, that had to have been a cool experience.

Playing the Greek to open for Rufus and Aimee was totally surreal. It was my first show back since before the pandemic, and it was like way too tidy a metaphor for what had happened to me since. In February 2020, I played School Night at Bardot in Hollywood, and then over the course of the pandemic I amassed a slightly larger following using TikTok and Twitter, and then I re-emerged into the world to play one of the most historic venues in my hometown, opening for two absolute titans of songwriting. So it felt really special but also totally surreal to have a real life manifestation of all the work I’d been putting in during the pandemic.

You’ve got some pretty big festivals booked in Europe next year. What are you looking forward to most about those shows?

The part of next year’s festivals I’m most excited about is definitely traveling! I’ve done some light domestic travel in the latter half of 2021, but getting to leave the country again is something I’ve been aching to do for over a year, and I’ve never played music live for an international audience will of course be incredible. Like every other twentysomething, I really love to travel, and getting to do it with my music is pretty much the best case scenario.

Besides heading to Europe for those festivals, what are your plans for 2022?

Other than the festivals, I’m really, really hopeful that I’ll be able to put out another longer project in 2022. There’s so much that goes into releasing music, and I haven’t been able to do that as much as I would have liked, so I’m manifesting that the music I’ve been sitting on will finally have a place in the world for my listeners!

What do you have hoped to accomplish in the next five years?

In the next five years, I definitely want to release a full length album, hopefully two. I want to do a global headline tour. I want to play the Wiltern, my biggest hometown bucket list venue. I want to get some songwriting cuts with pop artists—I absolutely love writing pop music even though it feels totally out of character for me to sing. I want to spend a few months in the UK writing and just living. I’d love to start a podcast as well, maybe publish a novel and a book of poetry. There’s probably more I’m missing. But I’m sure no matter what 29-year-old me has accomplished, 24-year-old me will be proud.