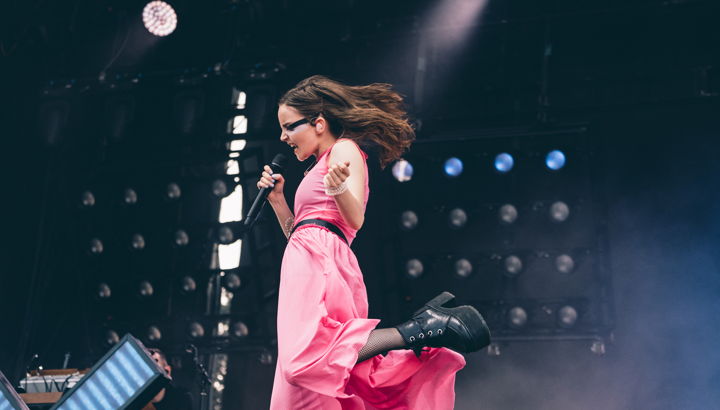 October has come to a close, but November is promising to bring about even more fun. Some pretty impressive artists are kicking off their Winter tours next month, including heavy hitters like CHVRCHES and SZA. Take a look at our list of shows you’ll be able to catch starting this month, and track these artists on Bandsintown to know when they’re stopping in your city!

CHVRCHES are about to bring their new album Screen Violence to a stage near you. The Scottish electronic-pop trio will begin their trek on November 9 in Houston, before heading to New York, Las Vegas, and many more cities. The tour will conclude with a two-night stint at the Hollywood Palladium on December 17 and 18. Vocal powerhouse Donna Missal will be opening for the band on all North American dates.This is sure to be an ultra-fun show, filled with the group’s signature synth-pop anthems like “The Mother We Share.”

If you have never seen MisterWives live, your chance is now. The New-York-based group is heading out on the Resilient Little Tour, with the first show happening on November 12 in Atlanta. They released their third studio album SUPERBLOOM in July 2020, and are finally taking it out on the road for fans to hear IRL. The alternative-pop unit, who are known for their high energy tracks, will be joined by “space girl” singer Frances Forever. Catch this must-see show in a city near you through December 19!

A live show from SZA is a rare treat. The “Good Days” singer will be embarking on a mini-tour this November, performing in Houston, Austin, Dallas, Denver, Salt Lake City, and Day N Vegas in Las Vegas. Fans can expect live renditions of her hits, like “Love Galore” and “The Weekend,” along with some brand new unreleased songs. Here's hoping she will even play “Coming Back,” her new collab with James Blake. Trust us, you do not want to miss the opportunity to see this icon on tour.

The time has come for The Aces to reunite with their dedicated fans. Following the October release of Under My Influence (Deluxe), the alternative-pop group is heading out on a North American tour. The run will begin on November 12 in Seattle, and includes stops in San Diego, Toronto, and Salt Lake City (just a short drive from their native Provo). Acoustic-pop savant Madeline The Person will be opening on the west coast, while upbeat rock band The Beaches will cover the rest of the tour. One thing’s for sure, this is bound to be a great show.

Seeing “Bunny is a Rider,” the unofficial song of the Summer, live? That’s something you cannot pass up. Caroline Polachek will kick off her debut solo tour on November 16 in Phoenix, and she is bringing her arsenal of dream-pop tunes with her. The Heart is Unbreaking Tour will feature tracks from Polachek’s 2019 album Pang, along with some brand new material. French electronic artist Oklou will be opening on all dates. Be sure to catch the former Chairlift frontwoman before she heads out on tour with Dua Lipa in February!

When two top-notch heavy metal bands tour together, buying tickets is a no-brainer. Evanescence and Halestorm are heading out on an arena tour starting November 5 in Portland. The run will conclude on December 18 in Worcester, MA. “Bring Me To Life” and “I Am The Fire” live all in one night? That is something you will want to see.

Pink Sweat$ fans assemble, it is time to see your favorite teddy bear live. His tour begins on November 5 in San Diego, and will take the R&B singer through Portland, Boston, New York, and more, before wrapping up in Dallas on December 16. His album Pink Planet came out in February, and we are so excited to see it brought to life. Joy Oladokun, Bren Joy, and Kirby will serve as opening acts throughout the tour. Do not miss the boat on this gorgeous tour!

Looking to hear an ethereal voice in an intimate setting? Then you have to see Kacy Hill on tour. The singer released her album Simple, Sweet, and Smiling in October, just a little over a year after the release of her last project Is It Selfish If We Talk About Me Again? We hope we can hear songs from both albums live, in addition to some of her old tracks like “Arm’s Length” and “Hard to Love.” Hill’s tour kicks off on November 2 in Santa Ana before concluding in Los Angeles on December 5. This is one artist you have got to experience live!

Has “Mood” been stuck in your head for the past year? Well, you need to go to a 24kGoldn show so you can scream along to every single word. The El Dorado Tour kicks off in San Diego on November 2, and will end on December 8 in Seattle. “Come Through” rapper Bankrol Hayden is going to be opening up the show each night, so go see these two incredible artists when they’re in your city!

Beabadoobee is setting out on her first ever North American headline tour, and it is going to be excellent. The British alt-rock performer will hopefully play her glittery rock songs “Care,” “Last Day on Earth,” and her acoustic TikTok-viral hit “Coffee.” The trek begins on November 1 in Washington, D.C., and will carry the singer through Austin, Vancouver, Columbus, and tons more cities. Christian Leave and BLACKSTARKIDS will be opening the tour. Beadadobee and her band put on a fun show, check them out!