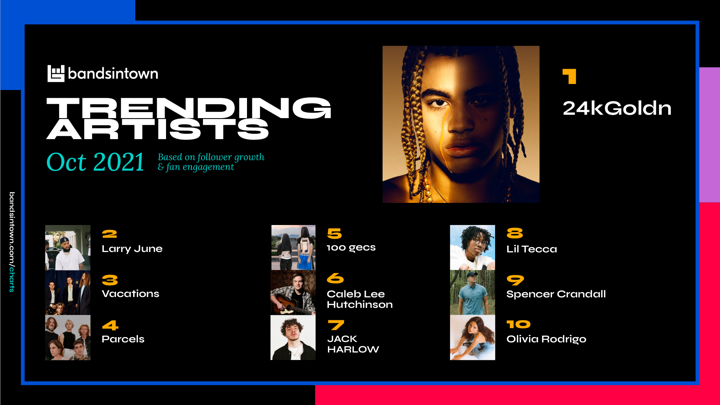 Our Emerging Artists chart has all the artists on Bandsintown who are gaining the most traction, according to follower growth and fan engagement.

Following the release of his debut album El Dorado and the success of his monster single “Mood,” 24kGoldn is hitting the road. The El Dorado Tour kicks off November 2 in San Diego, and will take the rapper through Los Angeles, Philadelphia, and more, before concluding on December 8 in Seattle.

“Smoothies in 1991” live? Count us in. Larry June’s Orange Print Pollstar Tour is set to begin on November 1 in Silver Spring, Maryland. The trek follows an already busy year for the rapper, who released two albums, Orange Print and Into The Late Night. Fans can catch him performing throughout the United States before his tour wraps on December 19 in Dallas.

This Winter, Vacations will set off on their first ever North American tour. The Australian lofi-pop band, who went viral on TikTok with their charming single “Young,” are set to kick off their tour at The Roxy in Los Angeles on March 2. The run will bring them through Chicago, Atlanta, New York, and more.

In celebration of their new album Day/Night (coming this Friday, November 5), Parcels will take the stage in London, Paris, Berlin, and New York. The electro-pop band is known for their work with Daft Punk, who produced their 2021 single “Overnight.” In addition to these shows, the group will head out on a world tour next year, beginning February 27 in Vancouver.

Hyperpop pioneers 100 Gecs are currently in the midst of their North American tour. They have been performing signature tunes like “stupid horse” and “money machine,” in addition to brand new songs. The duo, consisting of Dylan Brady and Laura Les, have hinted at a new album and movie titled 10000 Gecs. After wrapping this tour on December 12 in Boston, they will head to Europe for more headline shows.

Country crooner Caleb Lee Hutchinson will be performing a string of shows across Tennessee, Texas, and Florida in celebration of his new EP Slot Machine Syndrome. The American Idol season 16 runner-up will take the stage at The Bluebird Cafe in Nashville on October 27, before performing in Texas and Florida in November and December.

Jack Harlow’s Creme de la Creme Tour is in full swing. The “WHATS POPPIN” hitmaker will take the stage at Rolling Loud New York on October 28 before heading to Houston, Phoenix, Seattle, and more. He will also embark on a mini-tour of his native Louisville, Kentucky on December 14-18, playing in venues like The Louisville Palace and Mercury Ballroom.

After dropping his album We Love You Tecca 2 in August, Lil Tecca will embark on a world tour next year. The run kicks off on January 11 in Dublin, with the North American leg beginning on Valentine's Day in Boston. The “Ransom” rapper will captivate audiences through April.

Spencer Crandall is currently on the road with country rapper Kidd G, but he is about to headline more of his own shows. The “My Person” singer, who has 2.1 million followers on TikTok, will bring his romantic twangy sounds to the stage. His tour, which began on October 1, will resume on November 11 in Columbus, before wrapping on December 17 in Grand Rapids.

Despite not being announced yet, the anticipation for Olivia Rodrigo’s headline tour is real. The “drivers license” star recently performed her first-ever shows at iHeartRadio Music Festival and ACL Live. Based on the level of excitement in the crowd when Rodrigo took the stage, we can only imagine what her tour is going to bring.