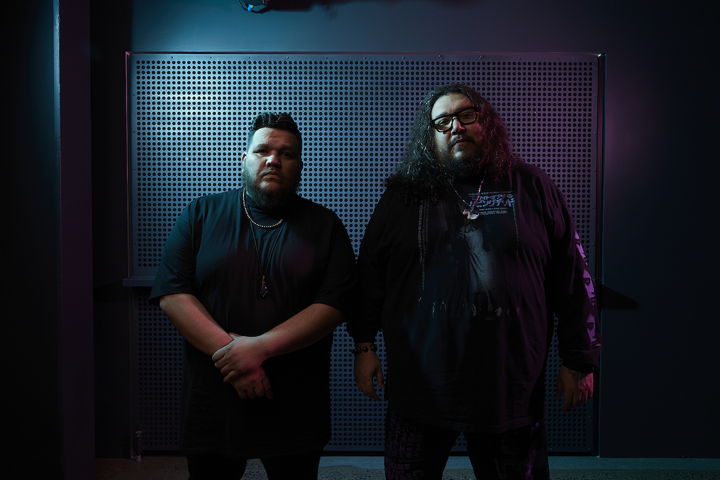 Music is an amazing way for an artist to pay tribute to their roots. In celebration of Native American Heritage month, we compiled a list of some pretty spectacular acts who are making everything from traditional music to modern rock. From throat singer Tanya Tagaq to uplifting punk rock band Sihasin, here is our list of awesome Native American artists to add to your music library.

The Halluci Nation’s music will blow you away. The duo, formerly known as A Tribe Called Red, blends club-ready electronic music with the vocal chants and drums of First Nations music. Based in Ottawa, the group’s music is commonly referred to as “pow-wow step” due to its prevalence in the First Nations dance scene. They are going on a North American tour next year, appearing in cities like Albuquerque, Los Angeles, and Austin.

Pamyua pays homage to their culture through gorgeous music. The group, who hail from Alaska, incorporate Inuit and Yupik chants into their songs. But, they are also inspired by R&B and acapella music, making for a completely enchanting sound. Their live performances are also incredible, featuring traditional Yup’ik dancing and gorgeous harmonies. You won’t be able to take your eyes off of them.

You need to incorporate DOC Native into your everyday rotation. The Seminole-Choctaw rapper’s songs are uplifting and honest. His song “Dream” recently won the award for Best Music Video at the American Indian Film Festival. The video aims to take down the stigma featuring Tourette’s syndrome, as well as honoring the beauty of Native American dance and dress. It is a beautiful message that listeners of all ages can relate to.

Snotty Nose Rez Kids are making waves. The First Nations hip-hop duo are known for their catchy, to-the-point lyrics. Their 2020 song “Boujee Natives” is a spin on Migos’ hit “Bad and Boujee,” with lyrics like “We them boujee natives, I got turquoise on my wrist/ We them boujee natives, five rings up on my fist.” The group, who is currently based in Vancouver, have been nominated for several awards, including the Juno Award for Indiginous Music Album of the Year.

Arigon Starr’s goal is to take on stereotypes associated with Native Americans. She does so through charming country-rock songs, comedic performances, and a comic book series Super Indian. Starr, who is a member of the Kickapoo tribe, is perhaps most known for The Red Road, her one-woman play featuring songs like “Trucker’s Bride” and the country-western inspired “Please Do Not Touch The Indians.” Starr’s work is wide-ranging and eye-opening —prepare to get lost in it.

When you press play on “Driving to Standing Rock” by Raye Zaragoza, you will be drawn into her vivid storytelling. The song is all about a road trip to protest the Dakota Access Pipeline on the Standing Rock Indian Reservation. “We had this dream and it's a sign/That we've gotta stop this pipeline,” she sings. Throughout her discography, Zaragoza pays tribute to her indigineous roots through honest lyrics and an acoustic folk sound. Her music is truly something to behold.

Nadjiwan is a true rockstar. He tells stories of what he learned while attending Chippeawa pow-wows as a young teen, all with a modern rock style similar to R.E.M and Incubus. Nadjiwan, whose real name is Marc Meriläinen, also makes electronic music under the name Quillbox. Lend him your ears, you will not regret it.

Lila Downs blends pop, jazz, and dance with Indigineous Mexican melodies, creating a beautiful soundscape. Her voice is rich and textured, captivating all listeners. Downs has been making music since 1994, and she remains a force on the music scene. If you have not had the chance to listen to her music, now is the time.

If you are looking for a band with a nostalgic sound and powerful message, look no further. The Diné brother and sister duo, who grew up in Arizona, make music with the goal of inspiring others. Their songs are punky, but their lyrics are uplifting. On their song “Gentler Than The Wind,” the band tells listeners to “Lean on the heart/Lean on the wind/Lean on the spirit/Lean on the within.” This perfectly encompasses the group’s of resilience and determination.