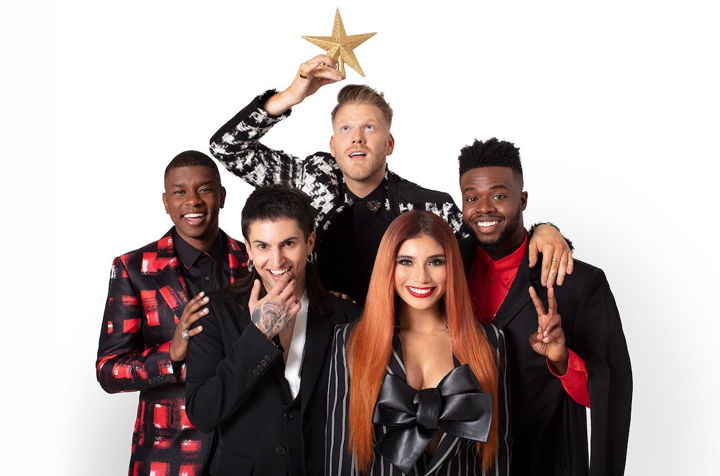 We all know that there’s nothing quite like listening to Christmas music. But how about going to see your favorite holiday tunes live and in person? This December, some pretty fantastic artists will be bringing classic Xmas day jingles to a stage near you. From American Idol legend David Archuleta to a capella sensations Pentatonix, here are seven tours that are sure to spread jolly and cheer. Let us know who you will be seeing by RSVPing on Bandsintown!

A Christmas With David Archuleta? Sign us up! The American Idol season seven runner-up is currently on the road performing holiday classics, and some originals. Archuleta has two holiday albums under his belt (“Winter in the Air” and “Christmas From The Heart”), so fans can expect a jam-packed setlist. His tour kicked off on November 26 in Salt Lake City, and will conclude in Chandler, AZ on December 23. You do not want to miss the “Crush” singer when he is in your city!

All we want for Christmas is to experience Zooey Deschanel’s magic in person. The New Girl star and singer-songwriter M. Ward make up the folk-pop powerhouse duo She & Him. They are about to hit the road for the 10th anniversary of their first holiday album A Very She & Him Christmas, and it is going to be incredible. The tour began on December 2 in Santa Barbara and will hitting Los Angeles, Chicago, Nashville, Atlanta, Dallas, and San Antonio. This is bound to be one amazing night.

It’s time for Mr. Christmas to take the stage! Brett Eldredge is in the midst of his annual Glow Tour, spreading holiday cheer in theaters across the country. The country crooner recently released his joyful new album Mr. Christmas. Fans can catch him in Boston on December 3 and 4, New York on December 10 and 11, and Chicago on December 17 and 18. Trust us, this is the perfect show to get you in the festive spirit.

If you’re looking to hear a timeless voice sing some classic holiday tunes, look no further— Sara Evans’ Blue Christmas Tour is in full swing. The Nashville-based star will be bringing songs from her 2014 album At Christmas all through December. The tour began on November 26 in Tucson, and will take the singer through Evansville, IN, Waterloo, NY, and more, before wrapping on December 19 in Des Moines. It is hard to imagine a better way to spend an evening than at a Sara Evans show.

Martina McBride is ushering in the joy of Christmas. She will be delivering sweet jingles throughout the month of December, stopping in Columbus, GA, Sarasota, FL, and Hot Springs, AK. The country music legend has released two holiday albums to date, the most recent being 2018’s It’s The Holiday Season. One thing’s for sure, we are ready to be wowed by this superstar.

Chris Isaak fans, you are in for a major treat. The “Wicked Game” hitmaker kicked off his Holiday Tour on November 27 in Alexandria, VA, and will head to Milwaukee, Denver, Las Vegas, and more. Hearing Isaak sing classics from his 2004 holiday album is bound to be an excellent experience. Tickets to this show make for the perfect pre-Christmas gift, don’t miss out!

Safe to say, Pentatonix are a Christmas staple at this point. The a cappella quintet are perhaps most known for their holiday performances, including their breathtaking rendition of Leonard Cohen’s “Hallelujah.” They recently released their fifth Christmas album Evergreen, and are currently on tour in support of the project. The group is set to play arenas across the country, including Mohegan Sun Arena in Uncasville, CT and Target Center in Minneapolis. The tour will conclude on December 23 in Grand Prairie, TX. Run, don’t walk!