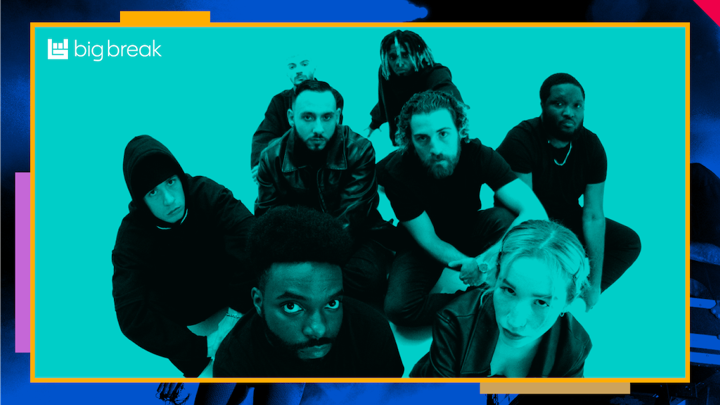 Listening to seeyousoon feels like a rollercoaster ride. Mesmerizing and utterly thrilling, their discography will give you an adrenaline rush and leave you raring for more. The nine-piece alternative hip-hop collective, made up of Ignacio, Kenny, Denny, Maddie, Josh, Dre, Drex, Luke, and Mitch, made their debut in 2020. Since then, they have been shaking things up with their undeniably frenetic sound.

Formed in 2018, the group initially bonded over their wide-ranging music tastes. You can hear a little bit of all their inspirations in their music, from the transcendent production of Flying Lotus to the pulsating beats Gorillaz are known for. They released their sophomore album HZLIKEHELL just last month, which includes the bubbly “FIX YOUR FACE” and “MAGIC,” the subject of the group’s newest eye-catching music video. The follow-up to 2020’s VIDÉ, it is a masterclass in electronic hip-hop— each track is more amusing than the next, shocking your system from the beginning till the end.

2021 has been a complete joyride for seeyousoon. They are currently on tour with fellow hip-hop collective — and former Big Breakers— 99 neighbors. The group also recently performed at III Points festival in Miami, and their signature energetic performance captivated fans in attendance. We caught up with the “STEAMY” artists and talked about everything from pre-show rituals to the Florida music scene. Check that out below, and take a listen to the playlist filled with the songs they're currently loving. You do not want to miss seeyousoon live, be sure to track them on Bandsintown so you know when they're in your city!

You’re currently on tour with 99 Neighbors! How has their show inspired you? What has it been like playing for their fans?

Kkami (Kenny): Yes! Oh man, in so many ways. One thing I bring up literally every show is how good they pace themselves through their set. They make it look so easy. Playing for their fans has been so incredible and makes us so happy to see people love them because they are amazing people through and through and it inspires us for when we have a headline tour.

You all are known for your high energy performances. How important is your live show to your overall brand?

K: Yeah we go nuts haha. But we like to balance it out with our melodic songs too and we feel like we give our fans/audience a real experience compared to just playing songs.

Mitch: Super important!, I think hearing our music alongside getting a glimpse of all of our individual personalities set us up for something really special on stage, SHIT IS ILL AFFF!

The music video for “MAGIC” is such a good depiction of what a seeyousoon show is like. Why did you choose that song to do a live video for?

K: We feel like it captures what that song gives off- just raw live energy and we want our fans to be able to experience that with us every chance we get.

What is touring like as a group of nine? Are there any pre-show rituals you do together? Day-off activities?

K: We actually have had 5 core members doing most of the tour with others rotating in and out due to budget (we indie!!). But we’re all friends first and it’s honestly been a blast every step of tour. It also helps that the 99 crew are all sweethearts as well so it’s been a breeze on all fronts.

We do have a pre-show ritual that we do, almost like a prayer. We hold hands and allow ourselves to speak one and a time and be present and willing to give it our all collectively.

Day-off activities include finding the dankest food locally and talk with the locals and meet people. We love good food and good people and when the food is good… life is good.

Your debut album came out in July 2020, right in the middle of the pandemic. Did the release of your new album feel different knowing you were going to be playing it live so soon after its release?

K: Good question. Uhm, I don’t think we thought about it much lol. Of course we wanna play it out as loud and as much as possible. We made our second LP in the first quarter of 2019 so it goes for both albums: we wanna play these fuckers out hahaha. We’ve been ready!

You all initially formed because of your shared love of artists like Gorillaz and Jadakiss. What artists are you currently bonding over?

Wahid (Josh): So many records yo. It’s really hard to pinpoint one or even a few haha I know Yeat has been in rotation for a few of us. Dijon’s new album as well.

If you had to recommend one song of yours to someone who had never heard your music before, what song would you pick?

W: "MAGIC." "MAGIC" to me encapsulates our synchronicity on wax. I feel like we really tapped into something when we created that song.

Mitch: "MAGIC" ALL DAY!, I knew tht song was jst undeniable the moment I heard the beat, and after we finished it I was and still am tweakin off that shit.

What is the Florida music scene like right now? How has it impacted you as a band?

Mitch: I think the scene in Florida is as free and bold as it’s ever been, the kids aren’t scared to be themselves anymore so I think that’s pretty fuckin' awesome. As a group I think it just overall excites us to give the ppl dope shit that will surely further that freedom and boldness for Florida’s scene as well as music period.

Speaking of Florida, you recently played III Points in Miami. How was that experience? Do you have any bucket list festivals you would love to play?

K: III Points was incredible!!! We know that our music resonates with a festival typesetting and we love to throw down, so it was a perfect fit.

There’s so many. There’s probably so many I don’t know about too but I’ve always dreamed of performing at the amphitheater at Summerfest in Milwaukee cause i’m from there. Others like Bonnaroo, Coachella and Governors Ball would be ridiculous too.

Mitch: Mannnnn III Points felt like a dream lol. Miami just has a feel to it and III Points boosted that mf for me lol. And hell yeah Camp Flog Gnaw, Rolling Loud, Made In America, ALL them bitches. And we fully equipped to bring the vibes to any stage so can’t wait to check some of those off the bucket list in the future ☺️

What does the future look like for you all? What are your long term goals?

K: The future is bright. We want our shows to have a production quality that people can experience past just our music. From everything from the performance to the visuals to how we move- we want our shows to be more. We also never put ourselves in a box so I think our music will continue to evolve through our influences and how we feel in that moment in time.

All of us personally have individual goals too. For example, I’m getting ready to do a big release campaign for my solo side- Kkami. I’ve always done only production but always considered myself an artist. I’ve finally built up the courage to sing on my songs and I cannot wait to get it out for people to hear. Totally different from SYS but I think it builds the world that is SYS even more. Long term goals for me is to have Kkami do a world tour and create music all over the world in isolated places- capture moments in time. Just inspire kids to do more and create shit.

Mitch: Keep pushing this shit to the moon!!! More music, more ideas, more growth. seeyousoon bout to be the biggest shit in the world. We come in peace tho 💞