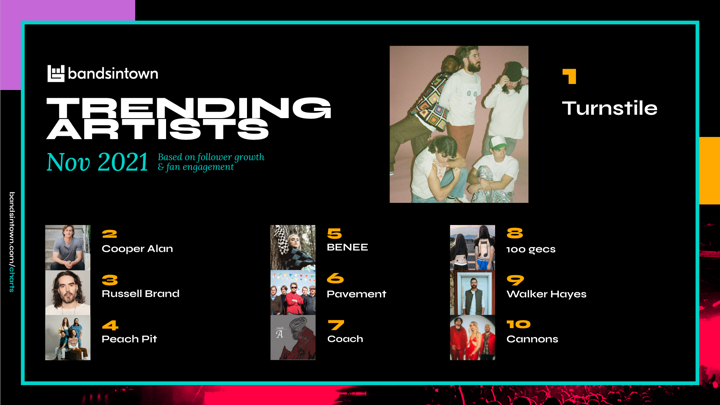 On our Emerging Artists chart, you will find all the artists on Bandsintown who are making major waves, based on follower growth and fan engagement.

Find out more about these artists below, and be sure to track all of them on Bandsintown to stay in the loop.

Turnstile recently wrapped their tour with $uicideboy$, and are set to go on their own headlining run next year. The leg will kick off in Nottingham, UK on January 29 before heading to North America in February. The hardrock punk band can be seen in Nashville, Toronto, Philadelphia, and more. These shows are in support of their dreamy third album GLOW ON, which features a collaboration with Blood Orange.

Cooper Alan has amassed 5.7 million followers on TikTok, and now, he is taking his singing videos to a stage near you. The country singer is currently on the In Real Life Tour with Alexandra Kay and Thomas Mac, hitting cities like Minneapolis, Kansas City, and Denver. Alan also recently released his honky-tonk single “Can’t Dance.”

Russell Brand is currently performing his new comedy set across the UK. On the “33” Tour, the “Get Him To The Greek” funnyman and podcast host reflects back on his life during the pandemic. He will be in Southend-On-Sea on December 6 and Portsmouth on December 12, before embarking on even more UK dates starting in January.

Chill pop band Peach Pit will be taking their show on the road next year. The Canadian quartet are set to kick off their tour on March 12 in Seattle. The North American leg includes stops in San Francisco, Brooklyn, and 3 shows in their native Vancouver. The “Alrighty Aphrodite” performers will then head to Europe for even more fun shows.

BENEE’s “Supalonely” pretty much ran TikTok during the early months of the pandemic. Her debut album Hey u x, which features collaborations with Grimes and Lily Allen, came out in November 2020. The New Zealand native is set to have a busy 2022, with dates booked around the world. Her North American tour starts on May 31 in Montreal, and fans can see her in cities like Boston, Atlanta, and Salt Lake City.

It is time for Pavement’s reunion tour. The alternative band will play their first shows together in nine years beginning at Primavera Sound 2022 in Spain. The “Cut Your Hair” rockers will begin their North American tour in September, performing at iconic venues like The Chicago Theatre and The Orpheum Theatre in LA.

Melodycore duo A will be supporting rock band Reef on their UK tour next April. The group, who are also known as Coach, are based in Illinois. They have become synonymous for their trance-inducing guitar-based tracks. Fans can catch them live in London, Leeds, Norwich, and more cities across the UK in April 2022.

100 gecs are in the home stretch of their North American tour, which will wrap on December 12 in Boston. The duo, who are known for their brash hyperpop sound, just released their new single “mememe,” along with a hilarious music video. They are set to begin their European tour on January 18 in Moscow.

We know, “Fancy Like” has been stuck in your head for months. Starting in January, Walker Hayes will be bringing the Applebees anthem, and songs from his EP, to a city near you. The Fancy Like Tour will begin on January 27 in Grand Rapids, and bring Hayes to Austin, Little Rock, New York, and more. He also just announced that Country Stuff: The Album will hit shelves on January 21.

If you are going to a lovelytheband show this month, do not miss Cannons. The “Fire For You” performers will be supporting the band through December 30, appearing in Houston, Anaheim, and more. They will also headline the El Rey in Los Angeles on March 1 and The Independent in San Francisco on March 2. The dream-pop unit released their shimmery new single “Ruthless” in October.