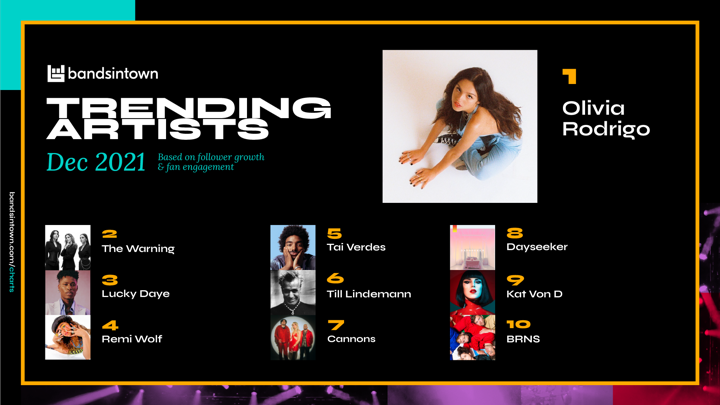 Each month we crunch the numbers to see who’s making the biggest moves on Bandsintown when it comes to follower growth and fan engagement. The final chart of 2021 features Olivia Rodrigo, Monterrey hard rockers The Warning, hip-hop phenom Lucky Daye, and eccentric pop genius Remi Wolf. Read on to see what's on the horizon for these ten rising acts for 2022.

Want to see your favorite acts on next month’s chart? Go follow them on Bandsintown!

When 2021's breakout star announced she'd be setting out on a world tour in 2022, fans lost their collective minds. The North American leg, which kicks off April 2 in San Francisco, will conclude on May 25 in Los Angeles. After that, the "good 4 u" star will stop through 14 dates across Europe including Germany, Italy, France, and the Netherlands. Cheers to finally hearing Sour IRL!

If you haven't yet familiarized yourself with three-piece rock band the Warning, buckle up—you're in for a ride. After going viral a couple years back for their cover of Metallica's "Enter Sandman," they've been consistently releasing new music while touring and hitting festivals across the globe. Since the October release of their latest EP, MAYDAY, the sisters—Daniela (guitar, lead vocals), Paulina (drums, lead vocals, piano), and Alejandra (bass guitar, piano, backing vocals)—unveiled that they'd be embarking on their debut US headlining tour starting January 18 in San Diego. Snag your tickets now!

Few acts make us swoon like Lucky Daye. Don't believe us? Take one listen to his Grammy-nominated single "How Much Can A Heart Take" featuring Yebba. The R&B stunner released the aforementioned track on his first EP since 2019, Table For Two, and plans to bring the new material to fans across North America on his Candy Drip tour. Kicking off in March, this run will see him hitting cities like Portland, Charlotte, Chicago, Philly, and NYC.

From her jaw-droppingly fierce ensembles to her energy-packed live shows, Remi Wolf is truly one of a kind. After jamming to her debut album, Juno, since October, we've been imagining how well the new music is going to translate live. Starting in January, the "Liz" hitmaker will be embarking on her own headlining US tour before joining Lorde for her North American dates in April and May, meaning you'll have two chances to see her in the coming months!

If you've ever scrolled through TikTok, then you've absolutely already stumbled upon rising star, Tai Verdes. Tracks like "A-O-K" and "Stuck In The Middle" have been used to soundtrack over 4 million videos on the app, making the former reality-star-turned-pop-star one to watch. The California native will be performing the viral hits live starting April, in addition to making stops at music festivals like Lollapalooza and Okeechobee.