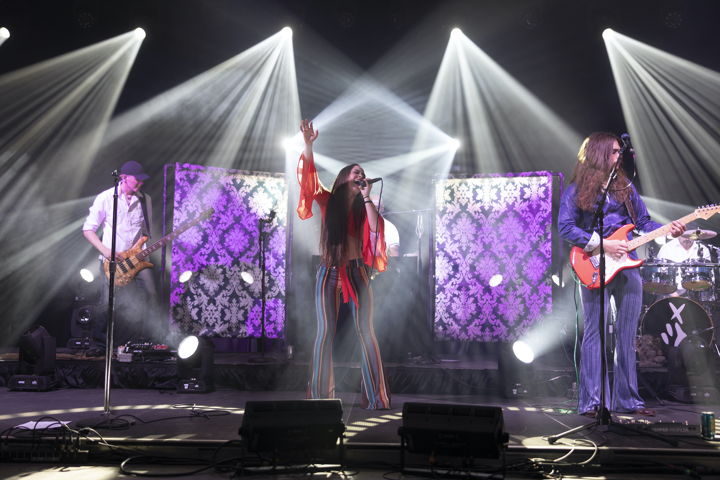 We caught up with the duo for this latest edition of the Hypebot, CelebrityAccess, and Bandsintown's "6 Questions With" series just as they released new music and began a full band 35+ date cross country tour.

You just released a new single “Run Away” that’s part of an album project. Tell us about the track and when we can expect the full album.

Jocelyn: We’re both just so, so proud of this song. We went through a lot over the course of lockdown (just like everybody else did), and this song is the result of those challenges. It’s about holding onto hope in spite of everything - pushing forward, finding the light, and just escaping it all.

This song is an upbeat, energetic reminder to ourselves to hope, and we hope it can be a reminder for you, too. We’re running away, and we want you to come with us. “Run Away” is the second single from our upcoming eighth studio album “Favorite Ghosts,” which you can expect out in May. It’s our favorite work ever, and we can’t wait for you all to hear it.

You did a series of live streams during the pandemic sitting on what I seem to remember was a very cool gold couch. How was that experience and do you see doing more now that live shows are returning?

Jocelyn: Yes, the couch! We love the couch haha. Going into 2020, we had a ton of momentum - we’d just been on NBC’s Today show, we had a full summer of dates booked, and we were wrapping up the new record. Things were going great… and then… well, that’s where the rimshot hits.

I don’t need to tell you that 2020 absolutely sucked. All of the sudden, all the plans we had just completely disappeared. We really had to think about what our next move was going to be. It was pretty scary, to be honest. So we did one of the few things we could think of: we went online.

We started livestreaming seven days a week, every single night at 7pm EST. We dubbed our streams “Couch Concerts” because that’s literally what they were - just the two of us, with our cats roaming around, in our basement, playing to our little phone lens every night and hoping someone was listening.

And you know what? A lot of people WERE listening. In fact, a group of wonderful fans sprang up online - shoutout to our Arndtvark fam! - who absolutely got us through. And now that live music is coming back, we’ve actually been able to meet some of those people in person for the first time across the country, which has been amazing. It really seems like everything is starting to come full circle.

We actually bring the couch with us on the road now and do a “Couch Concert on Location” in the middle of most of our live full-band sets. I don’t think we’ll ever stop livestreaming, either - it’s cool to add new tools to our music arsenal, you know? It’s also nice to come out of a situation like 2020 with some new skills that give us the opportunity to keep playing in lots of different ways.

What is it like being back on stage after being off the road for so long during the pandemic? Are the fans reacting any differently?

Chris: It’s been a huge blessing to get back onstage after so long. I don’t think any of us realized just how much live music meant to us until it was gone. And based on the way people have been reacting, it seems like everyone is feeling some of that thankfulness. We’ve never had audiences seem so happy and grateful at our shows. There’s some special magic in the connection we all make through live music, and it’s something I don’t think anyone will take for granted ever again.

You have a lot of dates booked across the country this Spring and Summer. Are there any venues or cities that you’re particularly looking forward to?

Chris: All of them! Live music is what we live for. We’re playing all over the place, from Maine to California, and we can’t wait to hit the road. We’ve got an entire album’s worth of new music to play for folks and tons of pent-up musical energy to unleash.

I guess if you were to force us to pick one or two shows we’re really looking forward to, we’d probably say the Bourbon and Beyond music festival in Louisville, because, like, have you seen that lineup? We’re playing with Greta Van Fleet, Jack White, Alanis, Pearl Jam, Chris Stapleton, the Doobies, Kings of Leon, Brandi Carlile… I mean, it’s crazy. But really, we’re absolutely psyched for every single show. Check our tour calendar, and maybe we can see you on the road sometime!

When you’re on the road do you have routines, habits, or “must-have” items in the dressing room?

Jocelyn: I’m always a fan of hot tea with lemon and honey in the dressing room. I love most kinds of tea. I’m particularly partial to Harney & Sons Moroccan Mint. I try to be good about drinking as much water as I can when we’re on the road, just because, you know, water is the essence of life.

As far as habits go, I always handwrite out setlists for the band every night. It’s just something I’ve always done, ever since Chris and I started performing together when we were in middle school. It helps to calm my nerves and get me focused on the task at hand: performing a kickass set.

Chris: Jocelyn and I are huge closet dork - we both went to college at Harvard. She studied English and I studied Computer Science. As if that weren’t enough to cement our nerdiness, we also play DnD and both really enjoy baking bread.

An unrelated but also somewhat surprising fact about us is that we’re also both really into winter gravity sports! Jocelyn is a skier, and I’m a snowboarder. We don’t have quite as much time to hit the slopes as we used to with our touring schedule, but we actually used to work as ski and snowboard instructors at Gore Mountain in Upstate NY.

Find all the Jocelyn & Chris tour dates and follow them on Bandsintown.