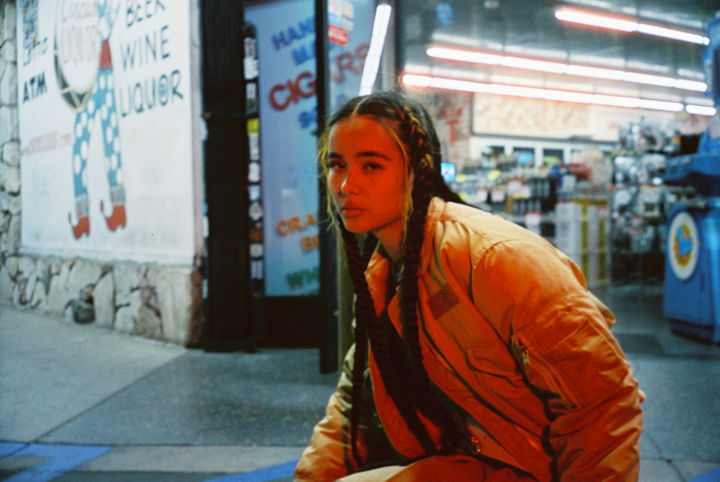 You may know them from their hit single “HARDCORE HAPPY,” or perhaps you’ve seen them open for Remi Wolf and Wolf Alice. If neither rings a bell, get ready to become well acquainted with THE BLSSM, a genre-bending singer-songwriter on the rise who's been finding fans in everyone who has stumbled upon their music.

Raised between NYC and Sydney, the LA-based artist has a unique sound that screams summer vibes. Their debut EP 97 Blossom came out last year, and was produced with members of BROCKHAMPTON, which is no surprise given its lush, stellar soundscapes.

97 Blossom made waves thanks to tracks that address intimate topics like gender, depression, anxiety, and self-discovery. After promoting it as an opener on a few tours, THE BLSSM has recently released their sophomore EP, PURE ENERGY.

Released on April 29th via Fueled By Ramen, PURE ENERGY is an incredible fusion of genres, incorporating vibes similar to Radiohead, Elliott Smith and N.E.R.D. THE BLSSM still manages to create songs with their own individual flair though, like “DIZZY'' and “NOT TODAY,” that will have you hooked seconds in.

You can catch THE BLSSM on tour with Role Model in North America through June! Being on the road since April, they’ve curated a pretty awesome Tour Bus Playlist with a variety of songs and some hilarious commentary. Check it out below, and be sure to follow them on Bandsintown.

"Dean Blunt is a unicorn and a super special artist."

"New Order is like a ‘soundtrack to living’ type beat. Melancholy and triumphant!"

“Be Quiet and Drive (Far Away)” by Deftones
Track

"One of my favorite Deftones songs, their guitar tones are pure energy."

"My manager put me onto Yeat and I was immediately excited."

"This song makes me sentimental about growing up in Australia. One of the greatest Aussie bands in my opinion!"

"This Butthole Surfers song reminds me of “Loser” by Beck and that’s probably why I love it so much. Super lazy but sticky as hell, and it inspired my song “NOT TODAY.”

"This Pavement song is essential. Because well…it just is."

“no sense” by Yung Kayo
Track

"Yung Kayo is my favorite rapper to catch speed in the last year. This track's production is so fresh. His visuals are too."

"I listen to this on the subway and throw my head down and make Little Rock gestures while strangers turn away and I gladly embarrass myself."