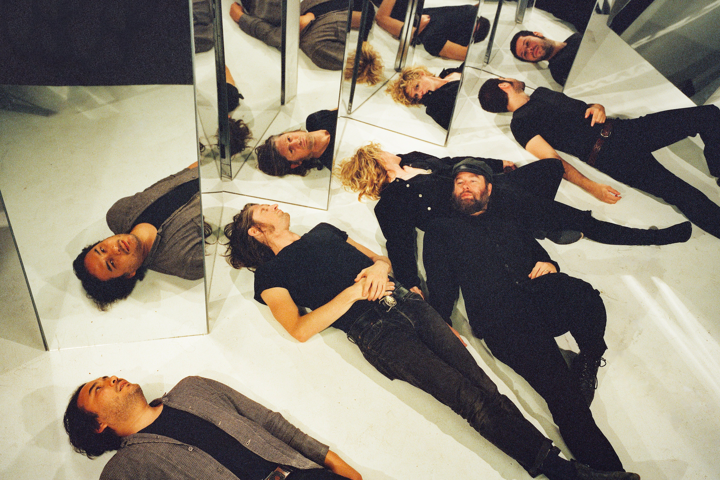 The Black Angels keep psych-rock alive with fresh and intriguing instrumentation that makes any listener who feels like they were born in the wrong generation right at home. The Texas natives first banded together in 2004, gaining a cult following along the way that includes fans of their large discography and attendees of the annual LEVITATION festival (previously Austin Psych Fest) that the fivesome founded in 2008. The acclaimed three-day event, which has seen performances from everyone from Tame Impala to Flaming Lips in the past, will be celebrating its 15 year anniversary this year.

The band— Alex Maas (vocalist/bassist), Christian Bland (guitarist), Stephanie Bailey (drummer), Jake Garcia (guitarist), and Ramiro Verdooren (multi-instrumentalist)—recently announced that they'd be returning to the scene with their first new album in five years, Wilderness of Mirrors, which will hit streaming platforms and record stores on September 16th. The first single off the album is titled “El Jardín”, which is a burst of energy with punchy drums and a nostalgic rock tone that will truly be killer to hear live.

And fans will get a chance to do so, as the "Young Men Dead" rockers have announced that they'll be embarking on a headlining fall tour of their own after wrapping their current west coast run with Primus and Dion Lunadon. They’ll be hitting plenty of spots in the coming months, making their way to cities like Chicago, Boston, New York, and Nashville. The tour’s promotional poster reads: “Be one of the lucky few to witness the unexplainable”, and we couldn’t agree more.

While on the road performing for fans across the US, we asked the five band members to let us know what they're vibing to in between shows. From Interpol to Los Panchos, we assembled their picks in a playlist that fans of any genre can get down to. Check it out below, then make sure to follow them on Bandsintown!

"Not Even Jail" - Interpol
Track

"I’ve been on an Interpol kick lately since I got to see them play back in April. This song always gets me pumped up and ready to do whatever it is I need to do!"

“Anyone who knows what love is (will understand)” - Irma Thomas

“Anyone Who Knows What Love Is (Will Understand)” - Irma Thomas
Track

A super relaxing song and nice to listen to after a hard day’s night. The songs all about unconditional love. (It’s also the Black mirror theme song)

One of my all-time favorites. You just can’t beat that drumbeat. And also, what a prophetic tale of the road humanities going down now…. condominiums on the moon, coming soon.

When on the road, I like to listen to this particular song because it makes a great soundtrack while walking around and exploring new cities.

This song is great to listen to while on the road. And every time I listen to “rid of me” I am reminded of how extremely important a hypnotic rhythm and an overall patience (to a song) can be.

This a slower burner I use b4 I jump on stage sometimes to settle me down b4 shows. It's hypnotic and suuuper vibey!

"Something About What Happens When We Talk" - Lucinda Williams
Track

I mean this and all of her songs really just bring me to a nice comforting place when I'm listening to the hum of the road when we are on tour. She is great and makes me feel like at home no matter where I am

This song just makes me happy and reminds me that I'm doin what I should be doin.

My go-to for walking/running and keeping upbeat. A true classic from 1972.

An incredible groove for any situation.

This goes great with the passing scenery from a window.

This whole “Return to Paradise” record is one of the lushest, most immersive thing I’ve heard in a while, perfect for being rocked away on the tour bus at night or roaming through Any-Town, USA in the golden hour glow. Produced by Snuff Garrett, featuring members of the wrecking crew, led by guitarist Tommy Tedesco; great record.

“The Ice Cream Man” by The Tornados
Track

Some of the coolest sounds and production to cleanse the sonic pallet. The whimsical tones, rhythms and melodies never lose their novelty. A real treat for the ears and mind.

My grandparents always listened to Trio Los Panchos when I was growing up and some of their songs were the first I had ever learned on guitar so most of their catalogue brings a comforting sense of home and a humbling reminder of where my love for music began which are both more than welcome while on the road.