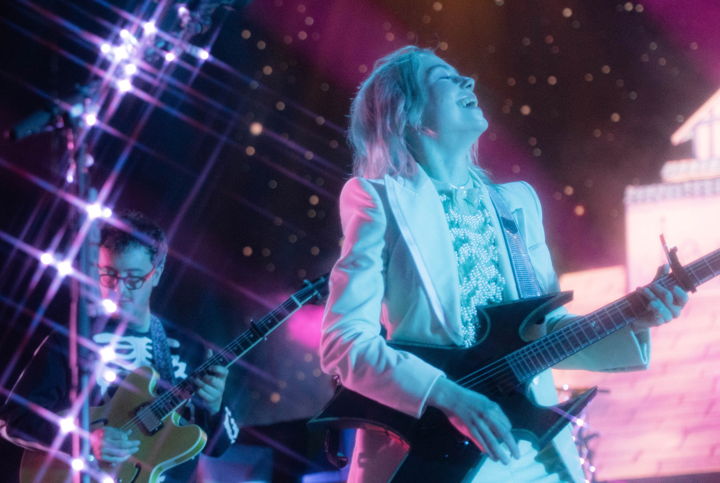 If you're an indie pop stan, it's safe to say you're a fan of Phoebe Bridgers. The sensational singer-songwriter has made a discography out of gutwrenchers filled with relatable themes that have touched a dedicated fanbase. At her live shows, you can find fans embracing each other, crying, laughing at the LA native's dry sense of humor, and screaming at the top of their lungs.

To celebrate her current 'Reunion Tour', we assembled some of our favorite moments from her live shows taken by fans in attendance. Check them out below, then make sure to follow her on Bandsintown!

1. "Graceland Too" in Los Angeles, CA

This incredible “Graceland Too” performance from Bridgers’ album Punisher is quite the tearjerker and united the crowd as they all sang along and cried. A true bonding experience that can only be felt during a live Phoebe set.

We love it when Phoebe shares funny anecdotes with her audience. Fans in Louisville can be heard cheering after she announced that her high school GPA of a 1.5—something LA county did not make easy for her to deal with the following year. "Good on you", she said to all the GED recipients and and high school graduates in the crowd.

When Phoebe hops into the crowd and starts kissing hands, everyone in attendance is wishing it was theirs. Artists’ personal connections with their fans are so special, and the Pharbz are no different.

Phoebe kicking a microphone off the stage just demonstrates her fearlessness. You know you would be paying for a show with incredible vocals and lyrics, and this trick was an added bonus!

@katienicks ACL i will never forgive you for cutting off her audio when i have been waiting for months to see her play the last minute of i know the end. #phoebebridgers #acl #punisher #phoebebridgerstok ♬ original sound - tan

In true Gen Z fashion, Phoebe gathered each crew member’s Zodiac sign and read them out loud to her audience during her set. Here's to hoping she gets into Tarot Card readings during her next show.

This video of Phoebe staring at the crowd with amazement as they scream her lyrics back to her is something unforgettable to witness (and partake in). Her shows are truly an unforgettable and connecting experience.