ChartsNewsReviewsFeaturesLists
Softcult’s Tour Bus Playlist Featuring Chelsea Wolfe, System of a Down, The Cure
The genre-melding twin sibling act is currently on tour with Destroy Boys and Pinkshift.
Playlist
Track on Bandsintown
Share on facebook
Share on twitter 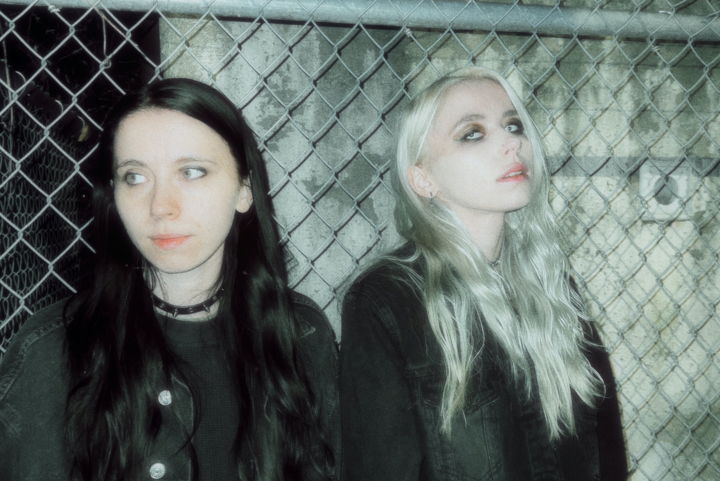 Softcult has taken a hold of indie-rock. The Ontario-based duo, comprising of Mercedes Arn-Horn (she/her) and Phoenix Arn-Horn (they/them), incorporates grunge, shoegaze, dreampop, and punk into their music to create a raw and intriguing sound for fans of any alternative genre. They exploded onto the scene with their 2021 debut single “Another Bish,” a piece of genuine DIY music that features clean vocal lines and nostalgic guitar riffs. Since then, the band has only grown, releasing an array of singles and EPs in the past year that has proven their might and strong musicality.

Strength is a theme in both Softcult’s lyrics and persona. The duo proudly stands upon values of feminism, social activism, creative freedom, self-empowerment, and gender neutrality. They have been commended for inspiring a new wave of Riot Grrrl music—giving off a strong political message to create a safe space for those who have previously been left out of the alternative rock scene. The "Spit It Out" two-piece are all about empowerment, and they make that clear by taking a DIY approach to their creative process. They produce their own songs, videos, and zines to establish a personal connection with their fans, which creates a special bond that is especially obvious when they're on the road.

From now until the release of their new single “One in a Million” on September 23rd, North American fans can see Softcult live with Destroy Boys and Pinkshift until they fly over to Europe for a tour with Incubus. Whether you plan to see Mercedes and Phoenix live or just want to hear the music that they love to tour with, listen below, and follow Softcult on Bandsintown to find out when the next time they’re coming to your area.

This song’s a good one for an early drive on tour when everyone’s still half asleep, it fades in nice and easy and has kind of a gentle vibe which is nice in the morning.

Cedes and I love this song, it always comes on atleast once in the van whenever one of us has the aux.

We’re huge Soft Blue Shimmer fans in the SC van. We got to tour with them this summer and they’re such a talented band and lovely people. They just put this song out not too long ago and it’s amazing.

This one’s perfect for a spooky night drive. It’s dark and sexy and kind of makes you feel like you’re in a horror movie.

We’re huge Momma stans. This whole album’s been on repeat since it came out.

This is like our hype up jam in the van. Everyone’s head banging, no exceptions.

This song will for sure come on when Phoenix has the aux. Definitely another hype up jam.

If this comes on in the van it’s instant air drums / sing-a-long time. When that intro hits you literally have to roll the windows down and bang your head or you get left behind in the gas station bathroom.

Another good night drive banger. Perfect for rolling up to the hotel at 2am under the light of a full moon.

We’ve been listening to a lot of Slow Crush lately, all their songs are awesome and inspiring, we wish we wrote all of them.