ChartsNewsReviewsFeaturesLists
The Murlocs’ Tour Bus Playlist Featuring The Modern Lovers, Randy Newman, and Willie Nelson
They’re taking their distinct sound across the US this fall with Paul Jacobs, Shannon Lay, and King Gizzard & The Lizard Wizard.
Playlist
Track on Bandsintown
Share on facebook
Share on twitter 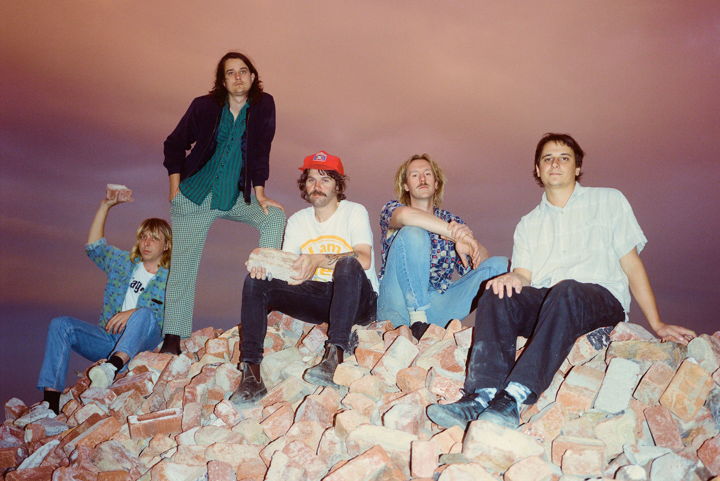 The Murlocs have mastered the gritty, satisfying sound of garage rock. They carry a coolness that is distinctly coastal–Victorian surf coastal to be exact. The five-piece band has been building a cult fanbase since they released their self-titled EP in 2012 due to their unique sound and outrageous live shows. You can see them on their extensive North American tour which kicks off in Austin, TX with an appearance at LEVITATION Festival and will take them through NYC, Philadelphia, Seattle, LA, Chicago, and more.

The Melbourne-based band has put out five studio albums, but their latest is perhaps the most impressive both in music and creativity. Rapscallion, which was released on September 16th on ATO Records, is a 12-track coming-of-age novel in album form. It depicts a wildly squalid odyssey featuring various peculiar characters, partly inspired by frontman Ambrose Kenny-Smith’s own adolescence as a nomadic skate kid. The band self-produced the album at their home studios during the pandemic which helped maintain their DIY approach while applying darker, more primitive themes to their music. Kenny-Smith said that he hopes “when people hear the album they really dig deep into the world of the story we’ve created, and it gives them that same sensation of traveling into the unknown.”

One can listen to any song on Rapscallion and immerse themselves in the themes of the lyrics, all the while dancing and vibing out to the impressive collection of songs. The Murlocs’ upcoming tour will also do exactly that IRL. The 21-stop Rapscallion Tour runs across the US and Southern Canada with few off days. Members Tim, Call, Cook, Matt, and Ambrose have all contributed their current favorite tracks to listen to between stops and they all really give you a sense of their eclectic taste. The playlist is below, and be sure to follow The Murlocs on Bandsintown to see when they’re coming to your city.

"One of my all-time favourite songs that I've been listening to again recently. Supreme groove, playing, and sentimentality."

"Fred Neil was one hell of a singer. This song plays during one of my favourite scenes in The Sopranos where Christopher is high at a carnival."

"One of the less weird songs from the album underwater moonlight but probably my fav, guitar riff is magic."

"I really love the simplicity of this track, it’s droney, heavy and sludgey. Can’t go wrong."

"A good walking down the street song, especially if your name is Pablo."

"Literally the most pumping East German Kraut autobahn song ever, love this song when I've drank 3 coffees and need to piss insanely bad and the next gas station is still ages away."

"I chose this song because it's ironic because I hate touring and I hate driving too."

The Toms - "You Must Have Crossed My Mind"
Track

"This is a solo DIY project by Tom Marolda, think it's late 70's. The entire album is incredible in my opinion."

"The song speaks for itself really. Underrated drummer."

"What a groove, what a bassline."

"I think I first heard this track from our mutual friends Whitney. They had put it up on their instagram story and being a fan of ‘I Got The’ by Labi, I knew I was going to dig it but little did I know I would be playing it constantly on repeat still to this day. It’s one of the most beautiful things I’ve ever heard. Gives me tingles down my spine, especially when the drums kick in."

"I was at this festival called ‘Boogie’ a few years ago when a good mate of mine Alex Mclaren walked past our campsite and chucked on this song. The vibe was immediately lifted through the roof and the party was kicked back into gear as we all started flipping each other off like Mr. Bean. I can’t help myself from cranking it every time we’re driving out of LAX in the van to start a tour."

"I remember hearing this track through some random algorithm one morning whilst cooking up some breakfast eggs. I immediately stopped what I was doing to write down the name of the song. It had me grooving like a drunk dad at Studio 54. Unfortunately I burnt my toast, but it was well worth it.