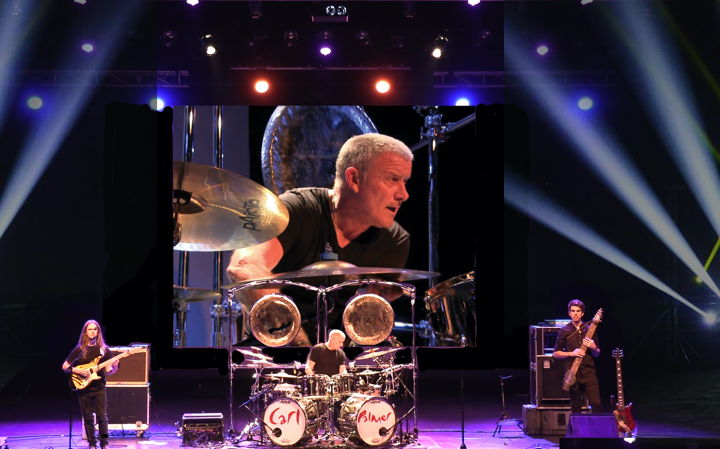 Carl Palmer is using rare concert footage and audio along with some multimedia magic to reunite with his Emerson, Lake & Palmer bandmates—Keith Emerson and Greg Lake—live on stage. We caught up with Carl just as the first leg of the Welcome Back My Friends: Return of Emerson Lake & Palmer tour was about to begin for this latest edition of the Bandsintown, Hypebot, and CelebrityAccess series “6 Questions With”.

Q: When your bandmates Keith and Greg passed away, fans thought that was the end of ELP. But you’ve found a unique and respectful way to bring it back to life. Can you share what you have planned?

Carl Palmer: We explore holograms, met with companies, and saw some of those shows like Frank Zappa. In the end, it did not feel right and was not something I believe Keith or Greg would have wanted.

My manager, Bruce Pilato, reminded me of two great shows we did at The Royal Albert Hall in 1992 that were filmed. ELP had just reunited, and we were in our prime, performance-wise. We had multiple cameras on both Keith and Greg and all the audio on separate tracks because we did a live album. The idea was: "Why not bring them back in all their live performance glory on three huge video walls, and I could play live on stage with them?"

So, that is what we did. We did 5 months of re-editing the video and taking me out of all the shots- so Keith and Greg are on the screens, and I am live on stage, and my two band members from my band will also join in on some songs. We will also do some ELP songs and other material with just my band, supplemented by archival footage of ELP. It is a real multi-media experience.

We approached the families of Keith and Greg and brought them in to participate in the tour. No one has done a full concert like this before, only a few songs like Paul McCartney just did with his duet with John Lennon on his last tour.

Is the anticipation of, in essence, performing again with two great musicians that you worked with for almost 50 years more exciting or more emotional for you?

When I first started rehearsing with videos, I actually got very emotional. I realized how much I loved being in ELP and how I missed this band. I am just happy that our music can live on in a concert setting that features all three of us together again.

ELP has a lot of big hits and fan favorites. Which songs can we expect to hear?

I don't want to spoil it for the fans- but all the big hits and fan favorites are in the show, from "Lucky Man" to "Welcome Back My Friends, Karn Evil 9" and a healthy mix of both progressive rock and the acoustic gems that Greg used to contribute to the band.

We held back some of the Royal Albert Hall material so I can change the show in the future. But between what you will see on the screens and hear firsthand, it will be astounding.

Ten dates have been announced in the US. Will there be more?

We have plans to do an extensive US tour in April/ May 2023 and then go to Europe, Japan, and maybe South America. It will hinge on this first run of shows. So if it is embraced by the fans, we will carry on for at least a little while.

Well, I have to stay fit to play drums the way I do. It's a very physical job. So, I like to exercise regularly, and I keep active by searching for real estate opportunities and working on my collection of artwork, which I started doing about 7 years ago.

As far as my dressing room, I am a vegan, so I need to keep my diet in line with that, but one of the things on my rider is always fresh falafels. Love them.

I came from a musical family. When I was 14, I was playing under-aged in supper clubs in the UK in what we called "dance bands." It was an orchestra that played the standards, similar to what you would see on The Lawrence Welk Show.

Three years later, I was at the top of the US Charts with THE CRAZY WORLD OF ARTHUR BROWN. How's that for a transition?