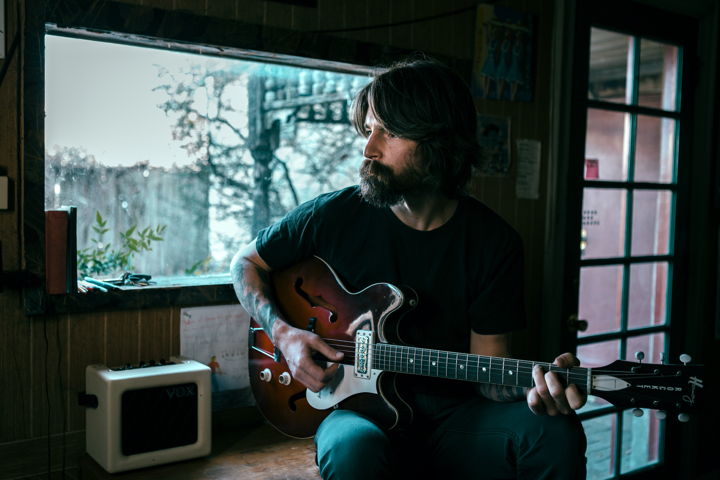 John R. Miller’s music “reflects a refreshingly raw honesty, reflectiveness, and the undeniable beauty in discovery and growth,” according to Spin, and this interview reflects that same thoughtful ethos.

We caught up with Miller for this latest in the Bandsintown, Hypebot, and CelebrityAccess “6 Questions With” series just before he began a new leg in his extensive North American and European tour in support of Depreciated, his latest album on Rounder.

Tell us about your musical influences. While listening to your newest album, I kept thinking this is a record that Towne Van Zandt might have made if he grew up in Appalachia. Am I anywhere in the ballpark?

Wow! That’s very kind…Townes’ songs have definitely been a guidepost in my life – I’ve always loved how they feel so untethered to any particular place like they came from somewhere far outside of him. I can’t honestly call myself Appalachian, though. I was born in Maryland; I spent most of my life in an area of West Virginia that’s more of a highway stop than a mountain town or city. But I have a deep and abiding love for Appalachia and West Virginia. It feels more like home than anywhere else I’ve been, and for its relative under (or mis-) representation, there are quite a few wonderful people and artists there working to make a difference.

You recorded this Rounder album in Nashville with producer Justin Francis (Leon Bridges, Kacey Musgraves). How was that experience?

Justin is an absolute pro as both an engineer and a producer, and he was so engaged and helpful in getting those songs together and working with me through that whole process, coming up with ideas and knowing when to put the brakes on. He co-produced it with our old buddy (and a bandmate of mine from our WV days), Adam Meisterhans, who also played guitar all over the record. Those two have been dear friends of mine for many years; it was a longtime goal to do a record with them, and we did it with the band I had been fortunate enough to play with for a couple of years at that point.

A good producer helps you get out of your own way, I think. It was just easy with those two. Justin also selected Sound Emporium as the studio, which was a blast to work in for a few days.

You’ve been on the road most of 2022. What was it like being on stage after being off the road for a year? Are the fans reacting any differently “post-pandemic”?

It was very strange at first. Still is, in a way. It really put a bizarre perspective on performing in general, where the idea is to try to get a bunch of people together and share a common experience. For a little while, it all felt so trivial in the heaviness of the moment, and I was asking myself if I seriously wanted to continue doing it, when maybe I could be more valuable serving something else instead of playing my weird little songs for folks.

But since getting back on the road, people have been so incredibly kind, and playing with the band started getting really fun again, and I talk to folks who seem very grateful just to be able to go see live music again when I don’t think any of us even knew if we’d ever be able to. I’m grateful, too; I don’t take it for granted like I used to, and I try to live in the moment and enjoy it more. If anything, that long and uncertain time off taught me that if it all got taken away again, well, that’d be okay, too, I think.

We have a run out to Colorado in January, which seems like a crazy time of year to go out there, but I’m pretty psyched to get back to some of those towns and to see some new ones. We get to do the Cervante’s anniversary party with Fruition and a bunch more very cool bands, so that’s something I’m looking forward to.

Also in March, I’m headed to Europe and UK for a little over a month with Chloe Edmonstone (my partner, who also plays fiddle in the band) and our old pal J.P. Harris, a tour which has been in the works for a couple of years now, doing some more intimate shows. I haven’t done any international travel in close to 5 years…

Fortuitously, we begin in Ireland and end in Spain, two of my very favorite places on Earth.

As we get older, the creature comforts become more valuable… the whole band loves Topo Chico, so any time that shows up in the green room, we’re pretty stoked. I try to keep a daily running routine, something I started a few years back, and that’s really taken the edge off the travel quite a bit. I used to do it with booze, often to great excess, but I don’t think I could go back to drinking until 4 AM every night and waking up past check-out time again… even if I wanted to, haha.

It has brought me a lot of joy and comfort (and sometimes abject terror) over the years. Also, inspiration, in its own way. Asimov, Herbert, Bradbury, Octavia Butler, etc., are some favorites. “Parable of the Sower” is one of the most impactful and vital books I’ve ever read. I also love OG Star Trek & the Next Generation!

Find all of John R. Miller’s upcoming tour dates and sign up to learn about new ones on Bandsintown.